It's been impossible to see any good birds lately, or even go out during the day other than rushing to and from my car. It's been a fury of packing, paring down the crap, throwing away tons of papers and trash, and cleaning -- for me, for Matty, and for AB! It's been crazy. Still, I'm staying out at a nice house with AB while she dog-sits for someone, so it's been like having a hotel away from home. (Besides, my bed and the rest of my belongings left for California yesterday on the moving truck.)

I sometimes walk the dog, and I've noticed all these moths everywhere, especially at night. The ones in previous posts were seen in the late afternoon, but last night (after a hard night of cleaning out my apartment and carrying down ELEVEN bags of trash to the curb) I turned on the lights, took the dog for a walk, and came back to find a beautiful assortment of moths!

The night photography is a challenge; I just had the outside lights on, and those moths never want to land in a nice place that's well lighted. And they fly around crazy and sometimes hit me (ALWAYS in the face, those jerks!), and I have to wait for them to land so I can get a decent pic. Still, it's really neat to see the different ones in all their splendor. Just like birds, some are plain and nondescript while others are like the Blackburnians of the moth world, flashing their crazy colors. There are tiny ones and huge ones, all of them with their distinct shapes and anatomy. It's cool stuff, and it's satisfying my urge to "Document and Identify!" which is what started me birding too.

Just making sense out of a crazy natural world, I guess. It's making me a little insane that the autumn migration is starting already and I'm missing it, but I figure I'll bird myself into a delirium when I get to California, so for now I'll play with some other stuff. 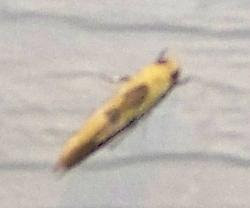 Sorry for the blurry on this one, but it's hard to get my silly camera to focus sometimes. Isn't he pretty? I thought it was a Crambidae (this guess was updated in 2012 when I got a clue) species, but someone found something similar and calls it a Gelechioidea species. Help? I wish I could've gotten a better photo but he flew right after I snapped this. What, moths don't like flashbulbs? Sheesh. 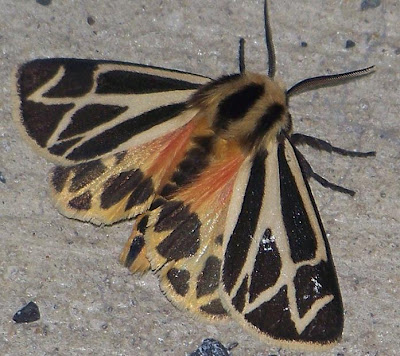 This guy made me draw my breath in and giggle with glee; is that a beautiful moth or what? He's definitely a Showy McShowoff, otherwise known as a harnessed tiger moth or Apantesis phalerata. 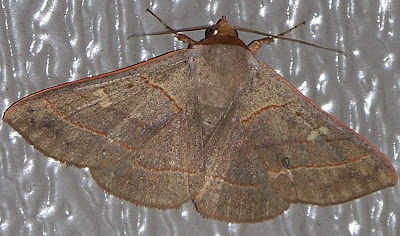 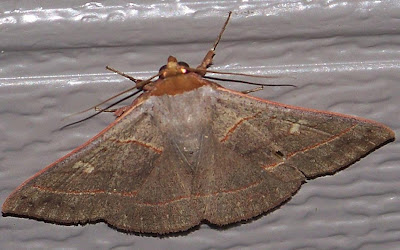 This one is scary. No idea what it is. Maybe a kind of Pyralid? I don't know. 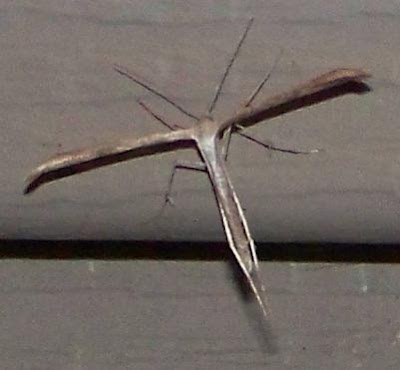 This is a type of plume moth, which is a very cool kind of moth. I think this is an Emmelina monodactyla, but I'm not sure. 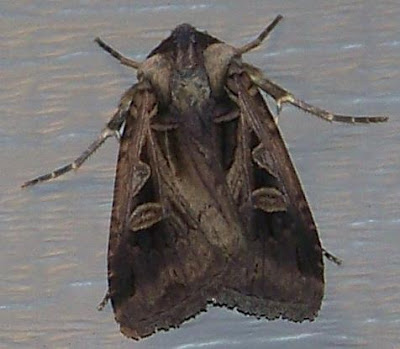 I THINK this is a dingy cutworm moth or Feltia jaculifera. The markings are right but he's darker than the example on Bug Guide. Perhaps it's a male/female thing? 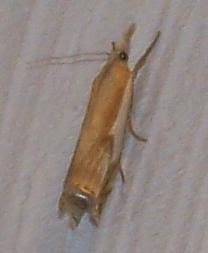 Another Crambidae?, no idea what kind. 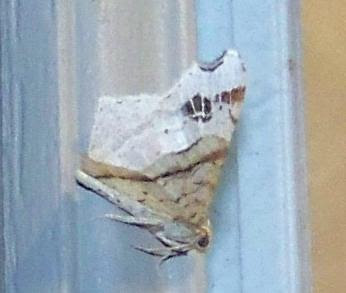 Um, yes.... No idea. But his wings are funny-shaped like some kinds of Geometrids. But here he is again, comin' atcha! 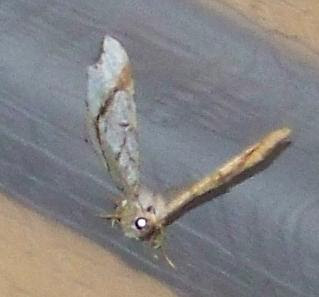 Look at those crazy psycho eyes! Run for your lives! 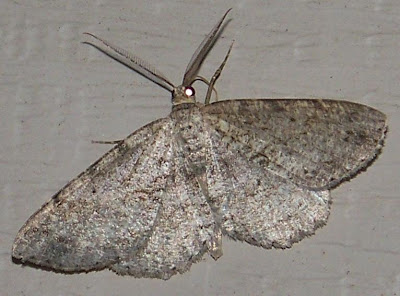 Do you know how many gray moths there are? SQUILLIONS, that's how many. I looked at moth pics until I was cross-eyed. I think this next one might be the same kind, only he's patterned. No idea. 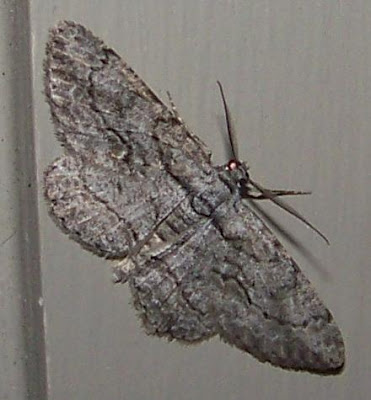 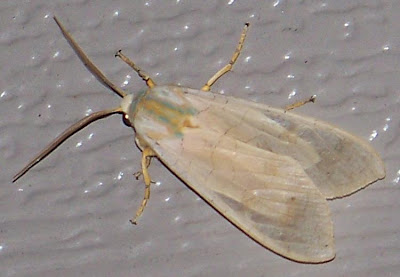 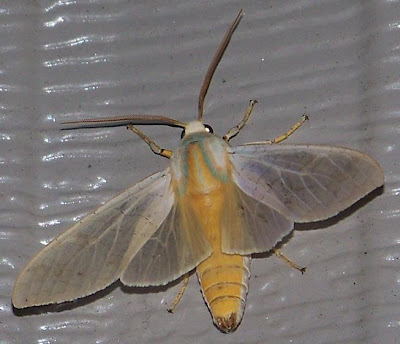 These two images are of a banded tussock moth, or Halysidota tessellaris. 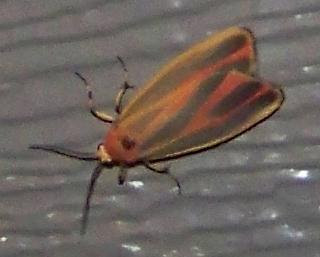 I called this one "dayglo moth" because of that bright salmon pink on him. He is a Hypoprepia fucosa, or painted lichen moth. 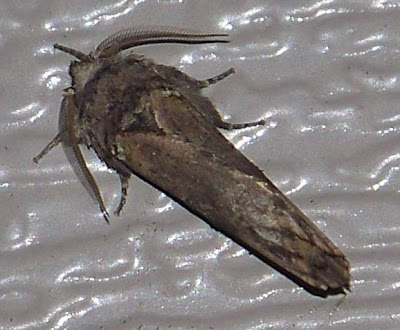 Right. It's a moth. With whiskers. 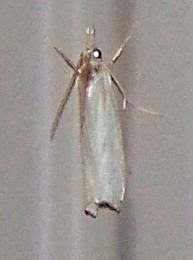 Yet another white Crambidae-looking moth. 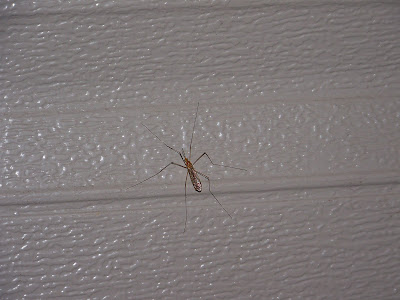 Is this a mosquito hawk? Did you know mosquito hawks bite? I tried to save one, to take him outside instead of letting him stay trapped on my three-season porch at the Marsh House, and the little *(!$%*^ bit me! And it hurt for several days! 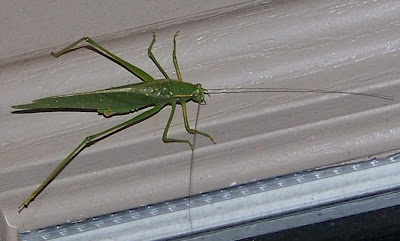 Is this a katydid? I would see his little wings move ever so quickly and slightly, and at the same time I heard a sharp little "chirp!"


I'm exhausted! And I still haven't finished IDing all these moths. Give me a hand, mothy people!

Sources consulted:
--a Bing! search of "common moths photos"
--Bug Guide's moth search
--W.J. Holland's The Moth Book, which I downloaded for free from the web thanks to a tip from Patrick
Posted by dguzman at 9:45 AM 9 comments:

So I haven't seen any birds of note, but I've seen some very cool moths! 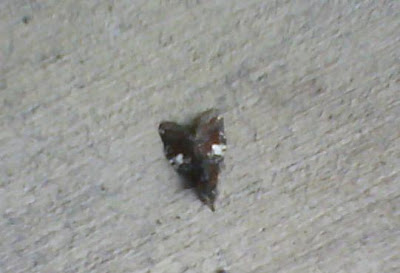 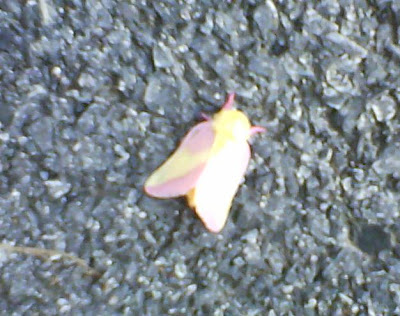 Once again, I apologize for the poor quality -- that phone camera sucks. I have my stuff scattered between three places right now, but I'm gonna try to get my camera from my apartment soon. (I'm not staying there, as all my packed stuff and furniture are at Matty's, awaiting the moving truck tomorrow.)
Posted by dguzman at 9:36 AM 5 comments: 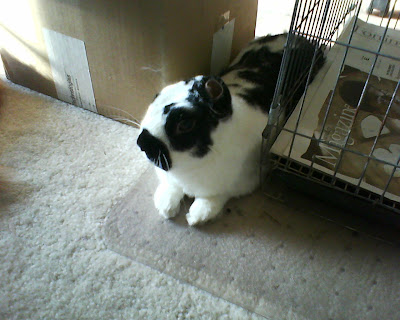 Niblet, hangin' loose
Well, I haven't had much time for birding lately, as I've been packing and seeing friends and stuff in preparation for my move west. This morning, I managed to get some good pics, however, and thought I'd share them with you. They're not birds, but they're still kinda interesting. 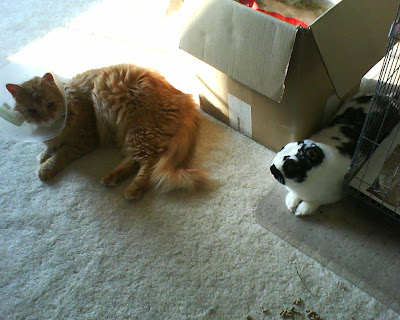 Here's Niblet hanging out with AB's kitty Maya (aka Maya Papaya). She's suffering from some sort of allergy on her face, so she has to wear the lampshade so she won't scratch. Poor kid. 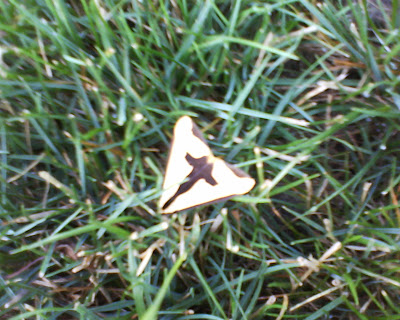 I saw this little moth (maybe an inch or so) in the grass this morning while walking up to work. I checked my moth book but couldn't find it. Any guesses? It's beautiful. Yellow with black, very triangular in shape. Sorry for the blurry, but I guess I got too close with the cellphone camera.

We spent this weekend moving all my boxes and what little furniture I have left over to Matty's so the movers can pick everything up on Wednesday. I will clean my apt tonight and tomorrow night, and then I have dinners and stuff scheduled with all my friends. Then we leave as early as we can manage on Saturday.

It's getting pretty crazy now, having to change phone numbers, cut off electric, etc. I hate those kinds of details, but someone has to do it.

I've been applying for as many jobs as I can find, so I'm hoping I'll get lucky. Keep your fingers crossed.

I will try to blog from the road, especially if we see some cool stuff -- and we'll arrive in California on Aug 5. Until then, probably pretty light blogging and commenting.
Posted by dguzman at 11:16 AM 14 comments:

Blue Knob State Park was beautiful, though the weather was a little crazy -- rain and cold one minute, then sunny and clear the next, then back to rain and wind, etc. But we took lots of blankets, we hiked some, and we just had a great time.

It was really nice up there and we made some great fires and had good camp food (eggs w/ cheese and veggies, mountain pies with sauteed portobellos and onion and green pepper, s'mores).

Sadly, I didn't actually see any good birds, but I heard lots of them -- Eastern Towhees, Red-eyed Vireos, Blue-headed Vireos, Chipping Sparrows, maybe a Black-throated Green Warbler (zee zee su-zie) and a Hooded Warbler (wheeta-wheeta-wheeteo), and some other sounds I didn't recognize and couldn't find on my birdJam. So no cool bird pics, but I did see this bird: 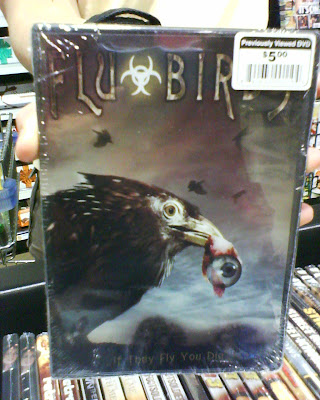 Indeed, "if they fly you die." *shudder* We were at Wegman's shopping for last-minute camping food when we found this baby in the $5 DVD bin. I resisted the temptation to buy it, however.

I have some camping pics of the site and the park, but they're on my camera in the car. I'll add those later.

For now, I'll add some pics of Niblet from my phone camera: 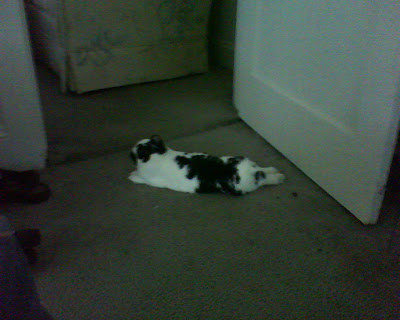 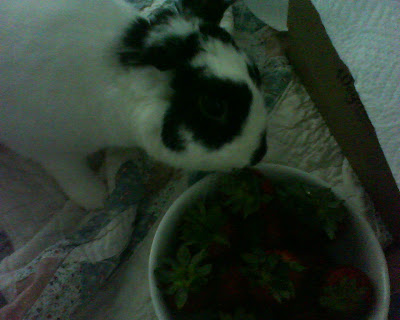 checking out a bowl of strawberries 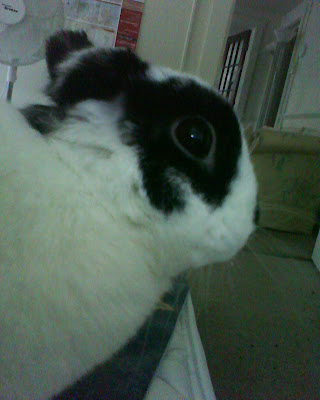 getting some morning snuggle time 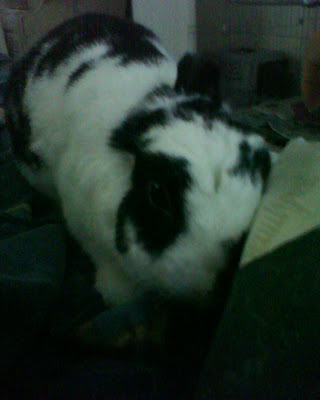 nuzzling my pillow and hoping for more petting

See how his fur has all grown back on the side of his head? He's all healthy and abcess-free now. I'm so glad I took a chance and switched vets; Ellen saved Niblet's life.

Summer is such hard birding, at least for boreal birds. Too many leaves! Maybe now's the time to focus on waterfowl. Speaking of which, I was doodling around on the Project Gutenberg website and found this great book on duck ID. You can download it for free, including the drawings and stuff. Pretty cool. If you've never looked around on Project Gutenberg, you should -- you can find a lot of great older books, including many of the old classics, all for free. Makes for good reading, if you don't mind reading on the computer. I usually pull up a book then do a "select all" and copy and paste it all into a Word document so I don't have to stay online to read. I highly recommend the site.

Anyway--more bird adventures whenever I have some. In the meantime, hope you're all having a great summer and seeing some good birds. I can hardly believe it's finally July; I'll be leaving in about three and a half weeks. THEN I'll have some adventures for you!
Posted by dguzman at 2:38 PM 14 comments:

I know, I know--where are the updates on Niblet? Seen any new birds lately? What are you doing?
Truth is, I've been kinda busy. I had to finish and put to bed the little newspaper I work for last week--and that took a lot of work. Then we went camping, and while I did call in a Scarlet Tanager to within 20 feet of our campsite, I didn't have my camera! (I loaned it to Matty so he could photograph the furniture he's selling on craigslist. BTW, I'm selling stuff on craigslist too! If you're interested in an authentic Cavalier Coca-Cola cooler, a really comfy couch, a beautiful art-deco gateleg table, some nice old oak chairs, or a beautiful Jacobean-style oak secretary, let me know!)
So I didn't get pics of the tanager, and I haven't taken pics of Nibble lately. I will say that he's doing absolutely great. No return of the abcess, and his fur's pretty much grown back (or at least over the shavey part--he does still have a tiny bald spot, but I guess it's just gonna stay that way). This morning, he hopped into bed with me and wouldn't let me stop petting him for about ten minutes. Then he was done; he hopped off to chillax under the couch.
We're going camping again this weekend, just me and the girlfriend. We're going to Blue Knob State Park, which should be really nice. Lots of easy to moderate hiking trails, some interesting geology, and probably some nice high-altitude birds.

This will be the first time AB and I have camped alone -- other times we've gone with her friends from Maryland or with Gretchen and her girlfriend. So this will be really neat -- I'm very excited about the thought of the long weekend and some birding in a new spot.

I promise I'll update with photos and excitement on Monday and Tuesday of next week.

Meanwhile, have a safe and happy Fourth of July! Pop some fireworks (if you're allowed) for me, and try not to catch anything on fire.