The end of the Texas trip, a new PA lifer, and some updates

Let's wrap up the excitement (that's now over two months old!) from Texas. After driving back in the rain to San Antonio, doing a serious car washing on the rental, and spending some quality time with the family, Gretchen, sister Mary, niece and junior birder Lilia, and I went to a couple of local SA lakes, Calaveras and Braunig, in search of Eared Grebes that had been seen during the previous weeks.

Here's what we saw: 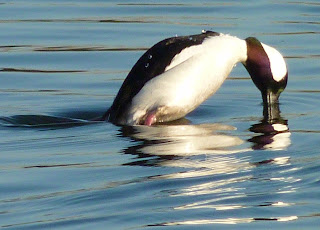 a sweet little Bufflehead about to dive 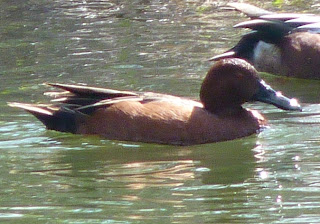 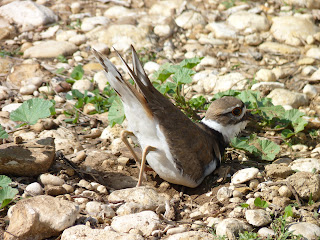 a little Killdeer digging a scrape for a nest 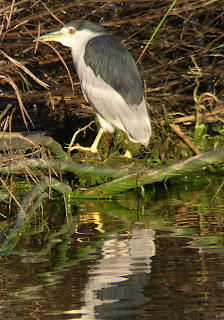 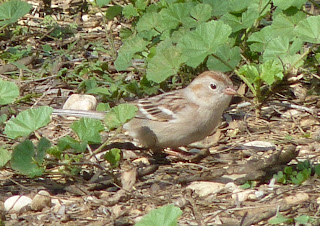 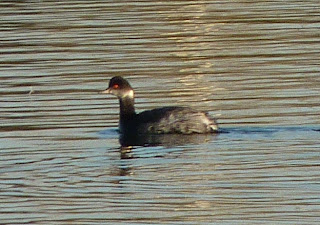 and YES! Our first Eared Grebe!
What a thrill! We ended up the Texas trip with a ridiculous number of lifers, even for me on my third trip down. I now have a whopping 336 lifebirds, if you count this little gem we saw a couple of weeks ago here in PA:

Rusty Blackbirds! Not a great photo.

How about this one?

Female Rusty Blackbirds! The neat thing about these birds was how easy it was to tell them apart from the Red-winged Blackbirds. Gretchen and I had debated several times about whether we'd able to spot a rusty among a flock of red-wings. Their size and coloring, however, made it obvious: they were almost blue, and the ones that hadn't quite finished their molting had little brown feathers mixed in, just like in the field guides.

To catch you up on recent events, AB and I celebrated our third year together by taking a trip to the Finger Lakes. We saw Taughannock Falls: 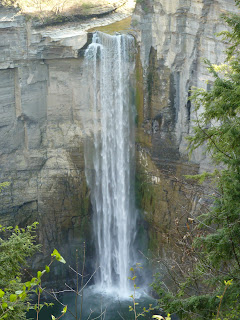 and hiked around the gorges, and we doodled in some great locally owned small bookstores and antique stores around Trumansburg, Ithaca, and Interlaken. We pretty much lived it up!

We're also getting to the specific planning -- choosing last workday dates, planning our trip to California to pick up the rest of my belongings, and looking for jobs in Maine and Massachusetts. Yes, folks, we're moving on! AB and I are both pretty tired of this little burg and its undergrad-drinking focus; we'll be leaving in August.

Where we'll go, nobody knows.

Well, actually, it'll be somewhere in Maine (probably Portland?) or Massachusetts (not in Boston - too expensive - but nearby).
Posted by dguzman at 8:24 PM 4 comments:

Lest you think I've forgotten about my blog, or I've gotten amnesia, I should finish updating you on the Texas trip. Still, it's been so long since it happened that I can hardly keep one day from trickling into another in my memory. I've just been so busy around here, what with work and winter-duck birding.

Let's just do a photo blowout to wrap it all up, shall we? I'll narrate where needed, though we were birding so fast and furious by this point that it's all kind-of a blur. We had decided that we were just going to hit places where recent sightings of potential lifers had been made; we ended up not even going to Bentsen, Laguna Atascosa, and Santa Ana for this reason. Still, we got some great birds! My jumbled impressions follow. 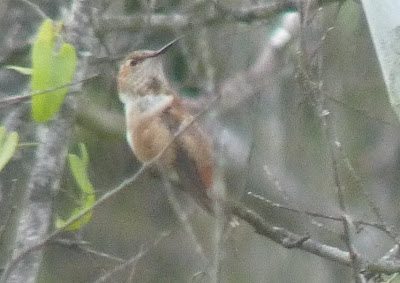 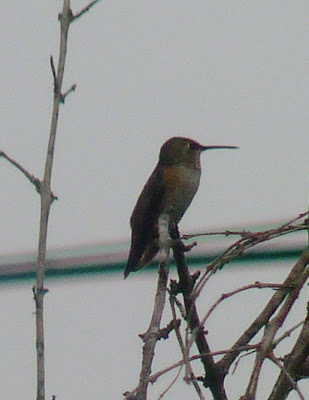 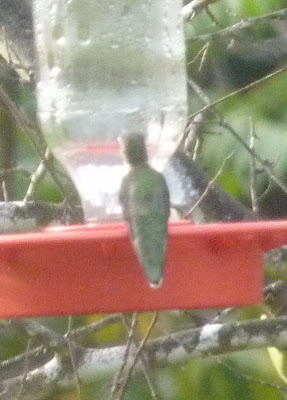 my first Broad-tailed Hummingbird; note the teeny tiny little head on the big body. These two hummers (well, it was probably four RUHU and this one BTHU) were having fights all over this "pata de vaca" (some sort of orchid, "cow's foot" in Spanish) tree. 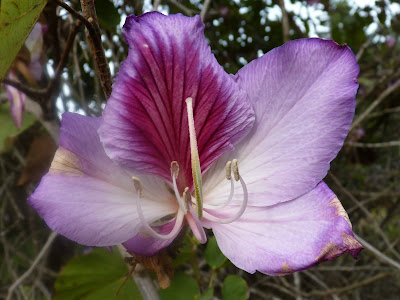 It was pretty fierce, and the little squeaky vocalizations we heard stopped us from giving up on waiting for these guys to show. It was the late afternoon of a very hot day, and we were exhausted; someone told us right where to go in the "tropical zone" of the park (behind the RV park area), and we waited for about 25 minutes with nothing. Suddenly, I heard that unmistakeable squeaky sound that hummers make when they're pissed off!

Gretchen was thrilled when we saw a Vermillion Flycatcher, lifer for her. She still says that's her favorite bird of the trip. 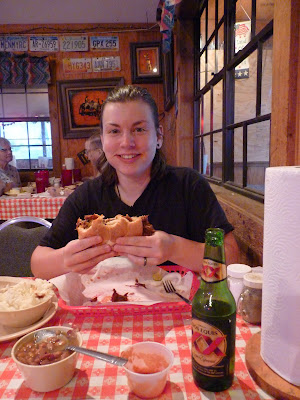 We went to Quinta Mazatlan, where we did NOT see a Tropical Parula but did see this Lesser Goldfinch: 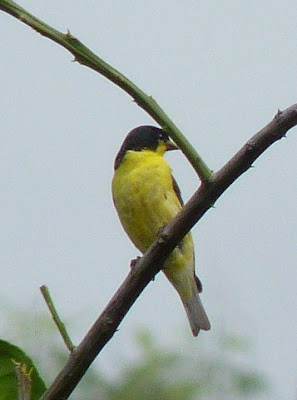 (photo taken under duress of another fire ant bite) We were hanging out here looking for the Golden-crowned Warbler and Tropical Parula, when someone told us the Crimson-collared Grosbeak was showing herself at Allen Williams' backyard. We boogied. 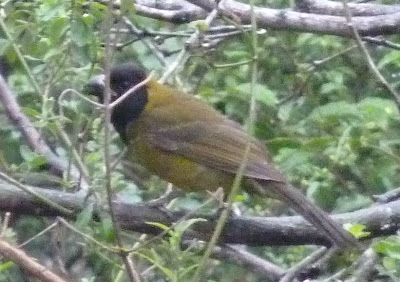 She appeared! The Crimson-collared Grosbeak female that spent so much time in Allen Williams' backyard in McAllen 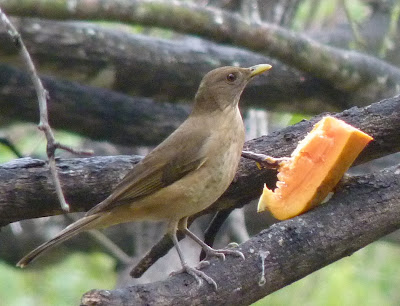 We also tried for the Tropical Parula at Frontera Audubon. No dice, but we did see this: 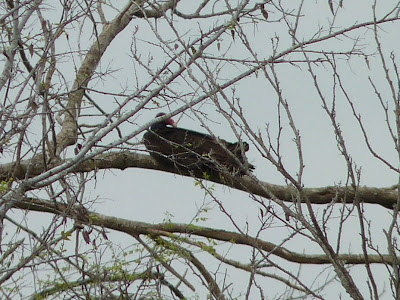 a Turkey Vulture apparently lying down on a branch!? I've never seen such behavior. Weird, huh?

We also drove to a big farm field near the Anzalduas International Bridge, where we saw a HUGE (literally at least 3000 birds) flock of blackbirds and such: 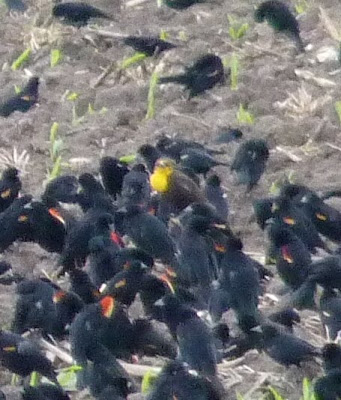 a Yellow-headed Blackbird among the red-wings, Bronzed and Brown-headed Cowbirds, and possibly a few Brewer's Blackbirds thrown in. 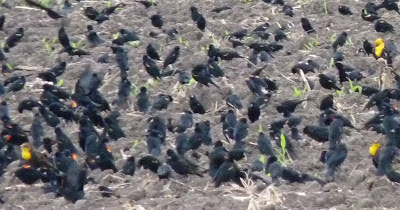 There were 11 YHBL in the flock of other birds, and they all kinda hung near one another. You can see three males here.
A better photo of a Bronzed Cowbird, seen at a gas station: 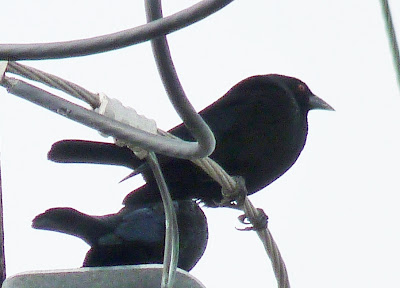 Can you see the creepy red eye? Baby G's eagle eye picked him out.

After the border bridge, we headed into McAllen to check out the 10th and Dove St parakeet roost, looking for Green Parakeets. We didn't get any roosting but we did get two separate flyovers of small flocks of Green Parakeets! No photos either, dangit. Still.

After all this birding, we headed farther up the Valley toward Rio Grande City, Roma, and points beyond. We stayed at a hotel near RG City where you got coupons at the front desk for FREE BEER. Sometimes, I really miss Texas! 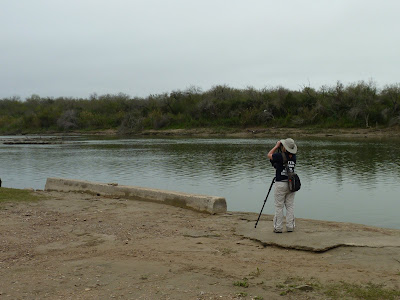 Gretchen at Salineño on the Rio Grande River

On Friday morning, we made it up to Salineño to see the one and only Brown Jay and more at the DeWinds' backyard feeder station. We relied on the kindness of Richard and Vicky from Bucks County, who gave us easy-to-follow directions into the wilderness.

The Brown Jay and all the orioles did not disappoint: 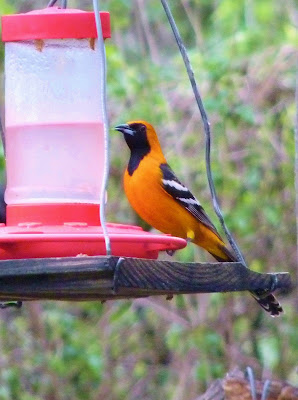 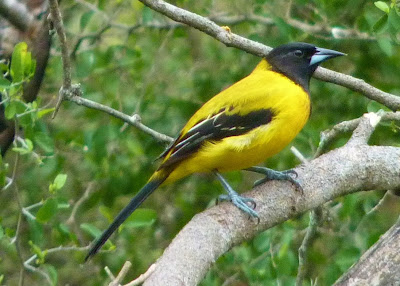 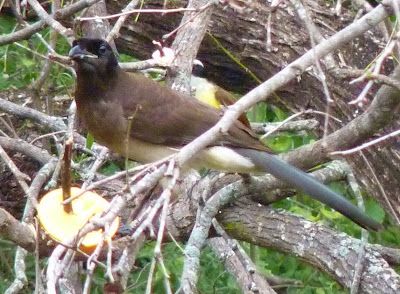 Brown Jay - this bird was GIGANTIC. He could kick a Bluejay's butt in about two seconds.

A lady cardinal tells a lady Pyrrhuloxia that she's a little pale: 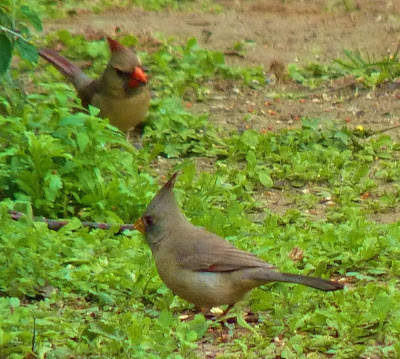 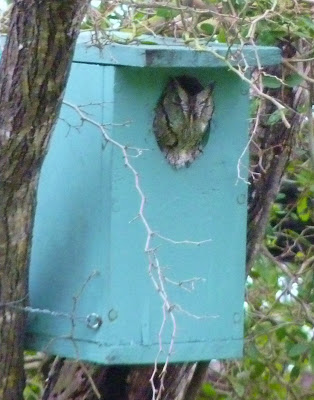 Okay, I'm beat. There's still more, so tune in sometime soon for the rest of the trip!
Posted by dguzman at 8:00 PM 2 comments: