You know how I love to look through the folders from old trips (I save my photos by trip and date); it's fun to remember the many things I saw that I might not otherwise recall. Sometimes, I find a surprise--the possible Cave Swallow was, I think, just a Purple Martin. But this: 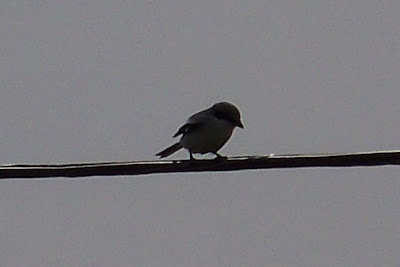 I was looking through the photos from my Rio Grande Valley trip with my sister Mary, and I remembered taking photos of this little bird on a wire.

I'm thinking Loggerhead Shrike! What do you think?
Posted by dguzman at 11:03 PM 4 comments:

LIFER OLDSQUAWS! (I refuse to call them Long-tailed Ducks.)

We finally got some good rain and cold last night and today, which means WATERFOWL! I got several texts from our local listserv (that's their new thing, texting alerts--which is awesome) about Bald Eagle and a little tiny lake called Colyer Lake near here. Colyer was easier for me to fit in, so off I went at lunchtime.

SCORE! Check these out!

I see a Ruddy Duck, some Scaup, some mergansers (red-breasted?), Canvasbacks, Oldsquaws, Buffleheads! The (correction) LESSER SCAUP (I thought Red-breasted Mergs were lifers, but I saw them at Middle Creek a while back) and OLDS are lifers! It was FREEZING out there, so I only stayed out about ten minutes, but those Oldsquaws were so worth it. They're beautiful!

Anyone want to play along on IDing each of these birds, from left to right? I'm working on it myself now, but I wanted to get these pics up quickly because I'm so excited!

ID them by the numbers!

White-winged Scoter, Ruddies, WW Scoter -- I knew those two big black things were something different, and so much bigger than the other ducks (even the Canvasbacks, or so I thought). But Alex said those were the WW Scoters, and I realize now that they had the right marks on them through the bins -- LIFERS! Alex was out there too, earlier today, so I knew he'd be able to confirm IDs for me.

By the way, I ended up mis-IDing a lot of the Red-breasted Mergs as Ruddies, based on their tiny size. Beware!
Posted by dguzman at 5:27 PM 5 comments:

Is this a Cave Swallow?

I was going through my lifebird photos (yes, again, AB!) and cropping them a bit more, doing some photo-editing, etc. when I noticed this bird in my shot of Purple Marlins: 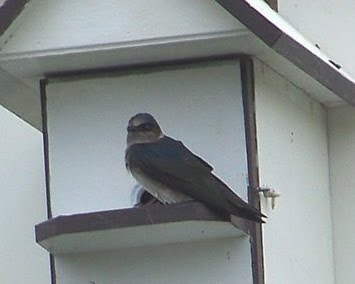 Perhaps a juvenile Cave Swallow? Note the pale cheek and throat and the pale spot above the eyes on the forehead (non-birdy terms, I know, but you get the idea). If it were a juvey Barn Swallow, the throat would be more reddish. If it were a Cliff, it would have a dark throat. All this is according to Sibley.

What do you think?

I took this photo two years ago in Cape May with Baby G, so it's not like I'm going to count this as a lifer, but I would like to know whether I'm IDing it correctly.
Posted by dguzman at 8:27 PM 5 comments:

A freezing morning at Bald Eagle

AB and I went to Bald Eagle State Park yesterday, and Baby G and her gal and I went this morning--all in pursuit of rumored potential lifers Eared Grebe and White-winged Scoter. We saw neither, but we had good times nonetheless.

I didn't get many pics on Saturday with AB; there wasn't much to see. I did continue my annoying record of getting the clearest shot of a target bird right when its head is behind a branch: 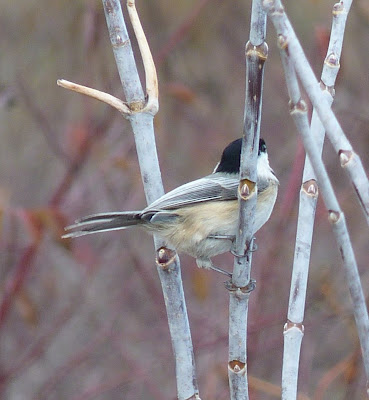 Grrrr. I have no good pics of BCChickadees, and I pished these guys to within like ten feet of us (to AB's delight), and all my other pics were blurry except for this one. Sigh.

To illustrate my agony, here are some reminders of other such great moments from the past: 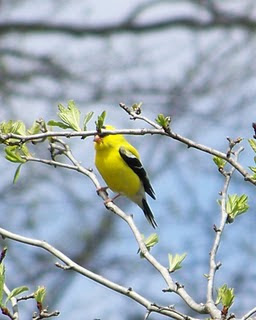 Not that big a deal, but this would've been a nice pic of an American Goldfinch. This next one was a little more upsetting: 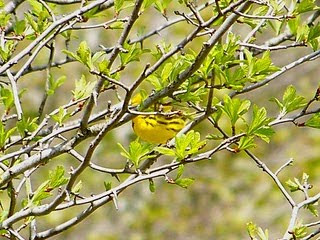 My lifer Prairie Warbler, just over the fence at the Marsh House years ago, hiding his face behind a branch. Oy vey. Just after I snapped this, he flew. No second chances in bird photography.

Anyway, this morning Gretchen and her gal and I arrived very early at the lake--and here's what we saw: 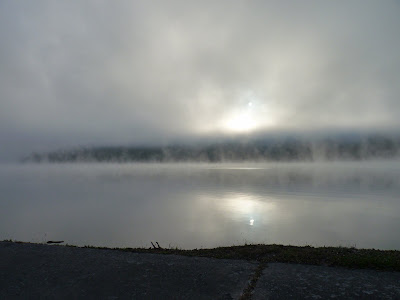 And it was COLD! There was frost all over everything, including this little cobweb: 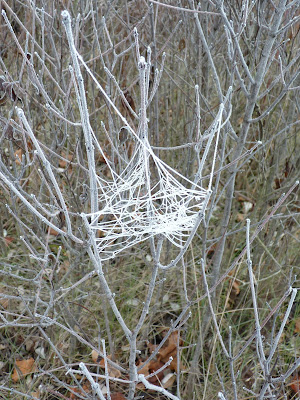 We saw some American Coots and a Pied-billed Grebe at one stop (East Launch), and then we moved to the Winter Launch and saw these: 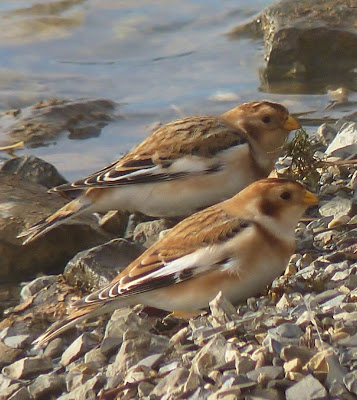 SNOW BUNTINGS! Aren't they gorgeous? Baby G spooked them as she walked along the water's edge and we followed them to the boat launch and watched as they charmed us with their cute faces and twittering calls. Lifer 284! They were awesome. I'm sure they look beautiful in their breeding whites, but this plumage is lovely too.

I wrote the following after returning from watching a monster night flight from the deck around the Convention Center, Cape May. For photos and her description, see Susan's post.

It's about 10:30 p.m., and I'm lying on my back on the wooden deck behind the Convention Center in Cape May. Jeff Gordon is lying beside me; his wife is lying perpendicular to us above our heads. Susan is on Jeff's other side--he's put his arms around us to keep us warm in the cold night. Everyone is looking skyward, awestruck.

Overhead, hundreds--no, thousands--of American Robins, Chipping Sparrows, Yellow-rumped Warblers, and other birds are flying erratically, like bats, glowing white in the night lights of Beach Avenue. A Savannah Sparrow rests on the street, a lifer for Susan. Every so often, a larger bird flies over: a Barn Owl? a gull? a woodcock? Hell, it could be a flamingo for all we know. We're seeing that many birds.

There are lifers for me too: Bill Thompson, Richard Crossley, Mark Garland, Louise Zemaitis. From our vantage point in the darkness, the birds look like leaves blowing in the stiff wind, highlighted by the street lamps. For me, it's an unbelievable, mind-blowing spectacle. Does this happen every night? How could I have missed it? How long will it last?

The best part? Even an ABA President, the editor of Birdwatcher's Digest, and one of the authors of The Shorebird Guide are just as dumb-struck as I am. They're all agog, gasping, uttering statements of disbelief -- just like I am.

For a magical hour on a magical night, we're all captivated, grasping for words and images to describe nothing more or less than the sight of robins and sparrows flying overhead on their way south. Common birds, common admirers, uncommon night.
Posted by dguzman at 10:50 PM 5 comments:

That's 84 species, 4 lifers. There were some birds that other Flock members saw that I didn't see, so I didn't list them. If I didn't see it and positively ID it (or have it confirmed for me by a pro), I didn't count it.

Another wonderful autumn migration in Cape May. I am secretly hoping we go to Texas this spring (maybe for AB's spring break), because I'd be able to get all kinds of crazy birds down there.

To wrap it up, thank you, weather gods, for actually giving us sun (instead of the usual drear and rain) in Cape May! That's a first!
Posted by dguzman at 7:43 PM 7 comments:

An amazing weekend like we had in Cape May really can't be summed up in a bunch of words, no matter how poetic or superlative-laden they may be. So instead, I'll give you some photo highlights: 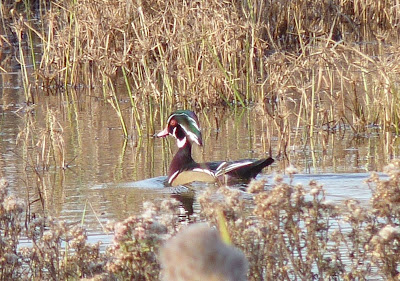 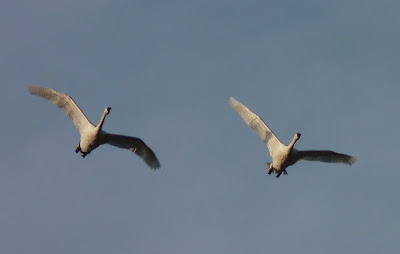 Tundra Swans, a rarity in Cape May, though we saw a flock of about 10 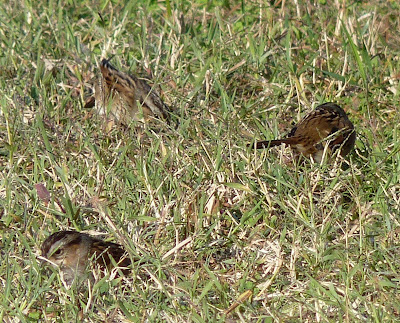 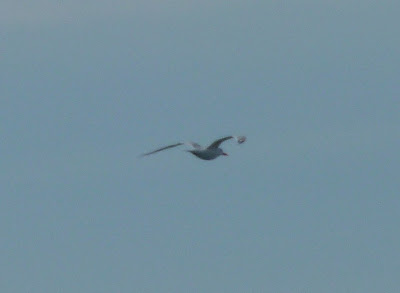 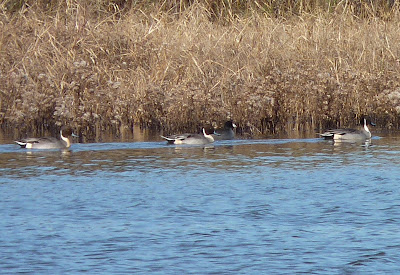 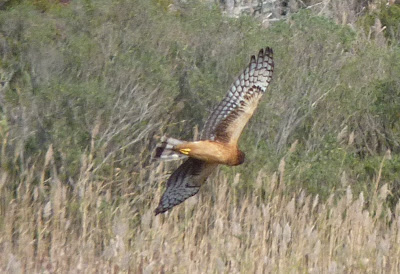 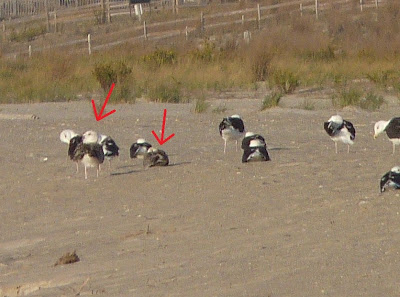 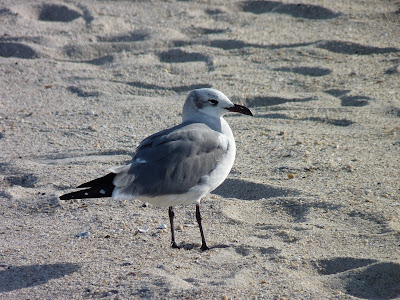 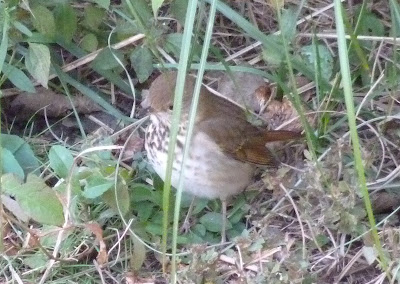 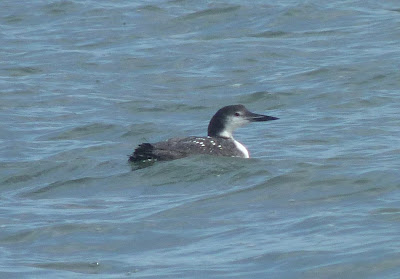 a Common Loon in the brackish marshes of Cape May's harbor 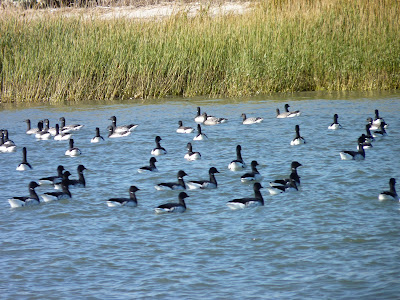 Brants were quite plentiful 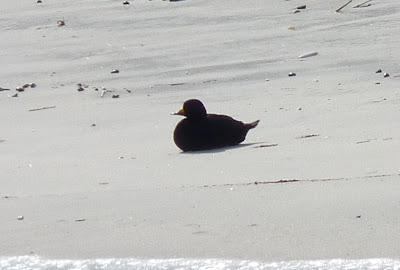 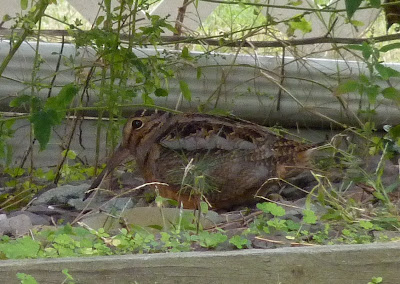 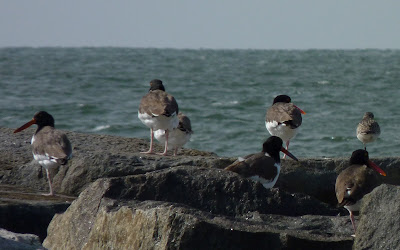 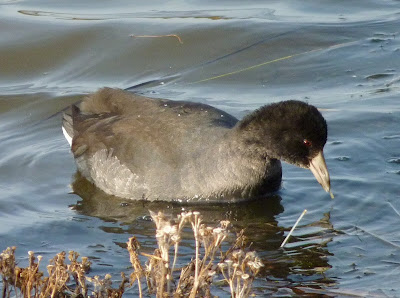 I didn't know American Coots had such blood-red eyes 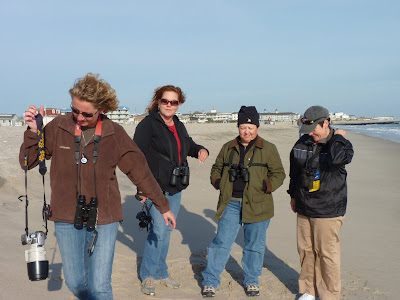 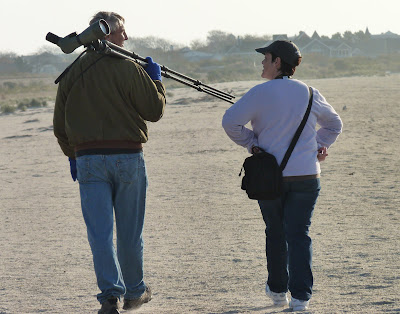 Some of us got to get really close to Pete Dunne. 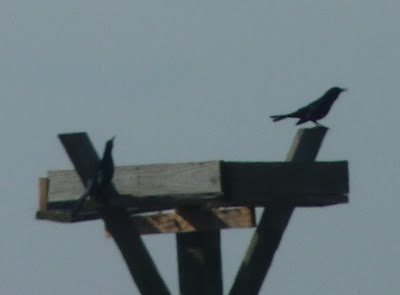 Boat-tailed Grackles, hanging out on an Osprey platform
I think one word that could sum up the weekend was "abundant." I mean, we saw literally thousands of Yellow-rumps, American Robins, sparrows, Double-crested Cormorants, ducks, and raptors. There were so many birds at any given time that it was challenging for the trip guides to point out just one bird among the dozens or hundreds flitting and flying among the foliage and in the air.

On Thursday night, Susan and I got to hang out with people like Bill Thompson III, Jeff and Liz Gordon, Richard Crossley, and Louise Zemaitis, first at New River trip leader Mark Garland's house (eating chocolate chip cookies minus the chocolate chips) and then down at the old Convention Center watching thousands of birds flying overhead in the lights of Beach Avenue. It was surreal--like a lost reel of The Life of Birds combined with an episode of Name-Droppers.

The whole weekend was non-stop, and we didn't miss a trick. We birded at the Beanery, the Meadows, the Hawk Watch, the Bunker Pond, and the beach at Cape May Point. AB and I watched the sunset and found some Cape May diamonds at Sunset Beach. We had breakfast at Uncle Bill's Pancake House and the Mad Batter's. We had a nice sit-down dinner at Carney's (we were getting sick of bar food). We watched the Rangers win their one World Series game. (sniffle!) AB fell in love with Cooper's Hawks and Wood Ducks.

So much happened... I could go on and on and never cover it all. Suffice it to say that we saw more birds than we'd ever seen all in one place in our whole lives. And we loved every stinkin' minute of it.
Posted by dguzman at 10:40 PM 3 comments: