If you're a friend on Facebook, you know that I finally went on a pelagic trip. I was so confident that I would see tons of birds, a whale or two. And I wouldn't get sick! Of course not! I was going to take Dramamine or Bonine, AND I was gonna wear some of those Sea Bands.

It was all going to be fantastic, and I was going to see lots and lots of lifers! Amazing birds I couldn't see on shore, birds that all look alike but are different! Shearwaters and skuas and petrels and storm-petrels and I would see them all!

So I did see a few lifers: 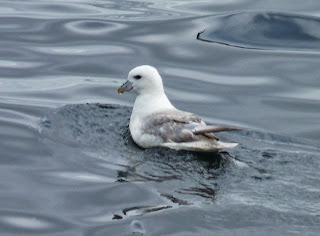 Razorbills! I love them. 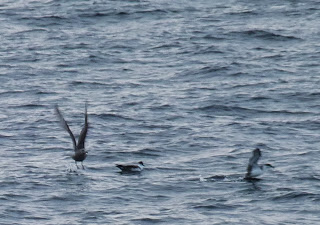 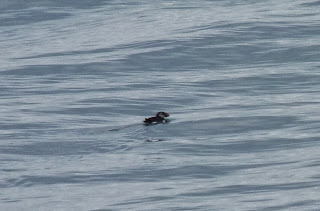 and Puffins! Atlantic Puffins! We saw three of them, and I managed a photo. 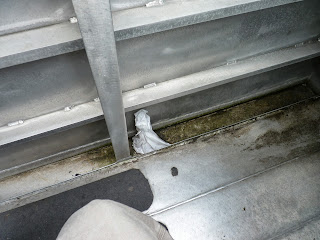 I say "managed," because most of the trip--all eight friggin' hours of it--I was puking my guts out or I was lying down, praying to be BACK ON LAND. Oh my sweet god, I can't even describe what it was like, other than THE WORST time of my life. I mean, I've been concussed, I've been sick, I've had broken ribs. But this... this was just awful. The most awful part was that I was TRAPPED. Trapped on that rocking rollercoaster ride from hell for eight hours. That little whte baggie is one--only one!--of my sick sacks.

Gretchen and Laura were on the boat as well. I will only say that one of them threw up even more than I did, and one threw up less than I. But suffice it to say that we were SO INCREDIBLY GLAD TO GET BACK ON LAND.

Okay. That's enough of that. So I did get some lifers. I didn't get many pictures because I was too dizzy to take pictures. Lifers:
Northern Fulmar
Great Shearwater
Sooty Shearwater
Manx Shearwater
Wilson's Storm-petrel
Leach's Storm-petrel
Razorbill
Atlantic Puffin
Pomarine Jaeger
South Polar Skua

I wish I could've gotten photos of all the lifers, but like I said--it wasn't possible. And I missed some others: Great Skua, Red-necked Phalarope, Parasitic Jaeger. And two Humpbacked Whales.