Gretchen and I went to the airport last evening to see a Short-eared Owl that's been making regular appearances there each day between 5:15 and 5:45. Sure enough, the owl appeared, flying low over a grassy area near the end (or beginning?) of the runways!

Unfortunately, I got no photos; I couldn't even see the bird unless I had my bins up, even when it was flying against the orange backdrop of the sunset. I watched the bird fly back and forth, making a lot like a Northern Harrier, looking for food.

I did note the white underwings, the lighter trailing edge of the wings, and the rounded head that said "owl" rather than "raptor." Pretty cool! I wish I'd gotten a photo, but I'm just glad I finally saw another owl. It's been years since I saw or heard anything other than a Great Horned Owl or an Eastern Screech Owl.

Perhaps you're wondering what I was doing looking at my photos from the beach in Texas from last year. I'm studying, naturally -- I'm taking my third annual February Texas Birding Trip next month! And Gretchen's coming with me! More on that later -- but for now, I've been studying to prepare for the challenges that I experienced last year: terns, gulls, and shorebirds. Baby G and I have divided it up, with me studying terns, the hooded gulls, plovers, and sandpipers.

While I was studying, I decided to take a look at my photos from the beach last year, and I discovered the Sandwich Tern! The black bill with orange tip, shaggy crest, white forehead (non-breeding plumage), and black legs. That's how I knew this-- 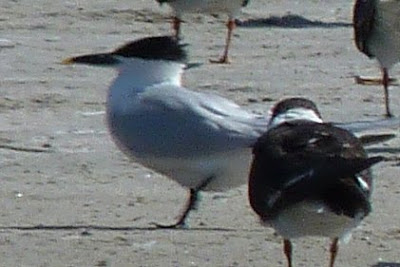 --was a Sandwich Tern!

It's been helpful to look at those old photos again, for many reasons. I've learned that this year, I need to get closer to get better photos, and I need to spend more time looking at individual birds rather than letting the flocks overwhelm me and just taking group photos to look at later. (yeah, yeah, I've said that before, but this time I mean it!)

Further, and reading Bill Thompson III's Identify Yourself has taught me that I really need to focus on learning the more common birds so that I'll recognize ones that don't match. That book is such a great resource; if you don't own it, you should!

That book, along with my Crossley, my Sibley, my Shorebirds Guide, and my new Stokes guide (beautiful!), have been my textbooks for the last couple of weeks. I'm taking notes, highlighting, putting little Post-it tabs with more notes, and reading reading reading -- and looking at my old photos -- to really burn these birds into my mind.

I've also been monitoring the daily Texas bird alerts (thanks, eBird!) and the Rare Bird Alert to prepare myself for the crazy birds that are showing up down there this year. The Black-vented Oriole is back (hoping for better photos this year!), along with Crimson-colored Grosbeak, Brown Jay, Dusky-capped Flycatcher, Black-legged Kittiwake, and others. We're hoping to get at least FIFTY lifers for Gretchen (it shouldn't be hard--she's never been down there), and I'm hoping for at least ten, plus some good photos.

Bonuses are that I'll get to see my parents, my brother, and good old sister Mary again. She's been able to go on both of my previous trips, but this year she might only be able to spend a day or two with me, so Baby G is coming along for the trip of a life(bird)time!

AB and I were able to fly to Texas for a few days to spend the holiday with my family. I hate planes, but it was worth it to hang out with my family. The Christmas bird-related hawl included a t-shirt with a raven and the words "Raven Lunatic" on it (AB's mom and dad), the Sibley's birding year calendar (sister Mary and her man Jim), and some Texas birding with AB!

AB is a rare bird indeed, able to bird AND knit at the same time: 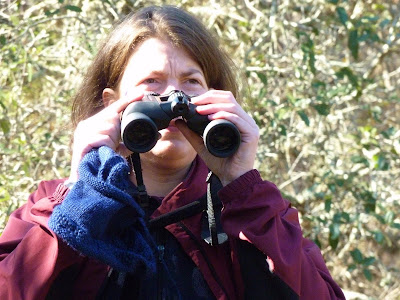 Yes, folks, she was watching birds as I pointed them out AND working on a little cardigan for her niece. Talented!

We birded at Warbler Woods with my niece Lilia and sister Mary. We didn't see anything too exciting, but I got some decent photos: 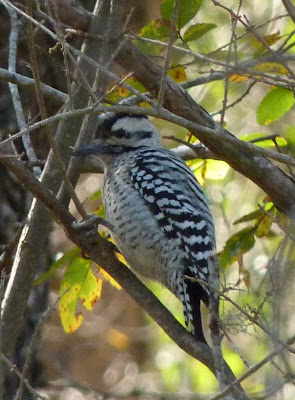 We got long looks at this Ladder-backed Woodpecker.

Despite seeing several Spotted Towhees, this was the best photo I got (and I use "best" reluctantly): 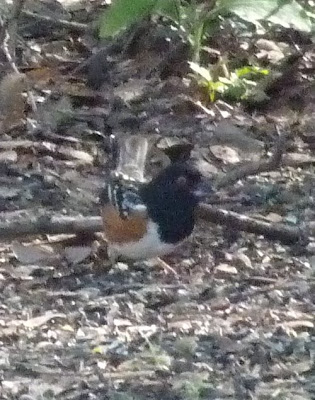 Well, at least you can see the spots.

This area is really amazing in terms of variety of habitats, though the drought has really taken a lot of the water out of the picture. I'm planning to go back there and spend more time (we only had time to see half of the area) in February with Baby G. I've been following the Texas listserv alerts from eBird, and they're seeing lots more stuff there than we saw.

When we first arrived, we saw a minivan with a woolly cap over its driver's side rear-view mirror; I figured someone had lost it in the parking lot and it was just hung there off the ground. 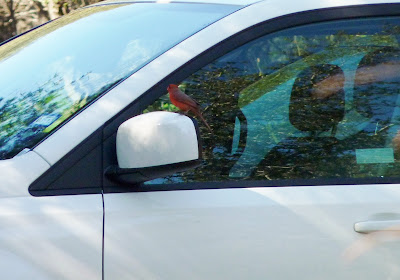 Attack cardinal! This guy pecked and pecked at my mirror until AB put her woolly hat over the mirror! He then flew off, confident he'd defeated his handsome opponent.

Look at this crazy caterpillar: 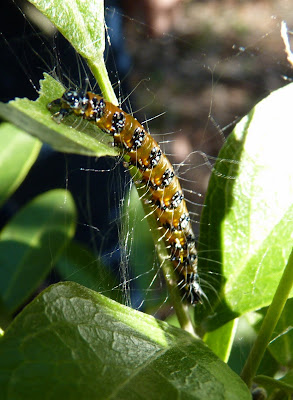 I haven't even had time to research what he might be.

And, because I'm always on the lookout for sport-related bird eggs, I was able to spot this little mystery egg: 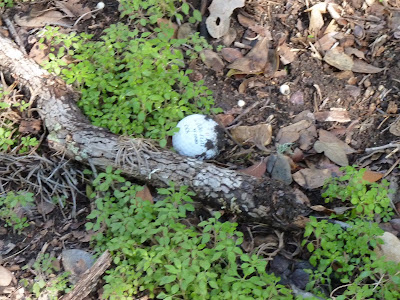 That one's for you, Susan.

We watched a little Hermit Thrush pick berries from a juniper; I missed the shot where he got a berry in his mouth and flew away, though: 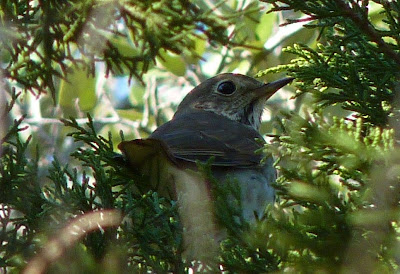 And finally, a photo of a Carolina Chickadee stuffing his face! 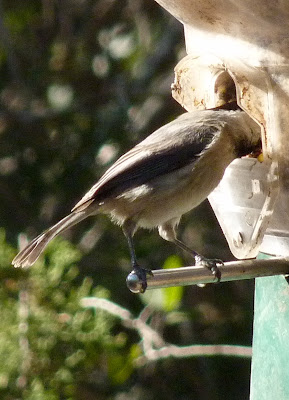