Dreaming of Digiscoping (or even a camera)

It's official: I've begun my search to find a cheap way to set up a digiscoping rig. Mind you, I have no digital camera, no spotting scope, and no experience with real photography. However, I view these facts as irrelevant. Don't go getting in my way with the facts, people. Mere obstacles have never stopped me for long.

I've visited more digiscoping and photography sites in the last few days than I can remember, but probably the most interesting and promising to a financially challenged person such as myself was http://www.pbase.com/roygoh/homemade_digiscope, in which a homemade spotting scope is constructed from surplus-store lenses and some PVC pipe, all for less than $25. Now THERE'S some ingeniuity!

Now the camera--that's going to be a little more difficult. I would love to fork over a few hundred bucks and get a Nikon CoolPix of some sort, as it seems to be the most used camera among the digiscopers I saw online. But--that will have to wait for some pennies from heaven, I'm afraid.

Meanwhile, I'm checking out the surplus lens web site (www.surplusshack.com), trying to find the appropriate lenses (and to even figure out just what makes a lens appropriate). It's slow going.

Any suggestions out there? Help? I'm poor, I'm completely uneducated about terms like "focal length," and I don't have a camera—but I'm efforting these things as we speak! Any help would be appreciated.
Posted by dguzman at 3:21 PM No comments:

There's just never enough time for me to do all the things I want to do in a day. I try not to squander my hours here on earth, but it seems even the long summer days aren't long enough for me. Work, sleep, eating, loving my family, and other daily chores leave little time for taking a leisurely walk and looking for birds. I suppose I'm a dawdler, spending hours at a time reading a book I've already read, or watching a movie I've already seen. But I love re-reading good books, and good movies never get old or tiresome. Still—birding time is precious.

I've been making an effort to go out after dinner along Rte. 45 to watch for flocks of cedar waxwings. I saw a couple last week, and as the waxwing was a long-time life bird, I was thrilled. But the light was fading, and I wasn't able to see their true color. For the last few evenings, however, it's been raining – a lot. No flooding here like in the southeastern corner of the state, but my yard is definitely soggy.
We live next to a big marsh, so birds and other wildlife are abundant. I just wish the rain—and the clock—would stop, so I could stay out there and appreciate it all.
Posted by dguzman at 11:30 AM No comments:

Ripped off by my own hometown

As most experienced birders know, there is a huge birding festival in Harlingen, my hometown since the eighth grade. (I'm now a little older than that . . . like 27 years older than that.)

Why wasn't this festival going on when I lived there??? All these big time birders go to that festival. The worst part is that I found out that one of the big bird sanctuaries is literally right behind my parents' neighborhood!

Here I am, in Central Penna., far far away from the cool birds of the Valley.

Ripped off, man. Harlingen kinda sucked when I lived there. Now it's a hip and happening birdy place. Figures.
Posted by dguzman at 4:09 PM No comments:

Avian wonders from my childhood

My first review! courtesy of my sister Mary. Here's what she said about my new little blog:

"That’s just the cutest. It’s like looking at a newborn baby or something. I just love it.
Did you include the owl that tried to kill you – was that a great horned owl? What about Chacha lakas (sp?), pelican’s from SP Island, and the notorious RGV Big Bird with eyes like silver dollars?"

by way of explanation:
I grew up in the Rio Grande Valley, in Raymondville, then in Harlingen, home of the RGV Birding Festival.

There was indeed a great horned owl that tried to kill me. When I was about five, my father knifed this owl while on a hunting trip--the owl was only stunned, though, and when Dad got home with it, the owl got up and came after me, flapping its great wings and terrifying me.

Chachalacas are a very loud, small turkey-sized bird common in the Valley--they literally scream "cha-cha-lac! cha-cha-lac" and the racket can be quite deafening.

A pelican at South Padre Island did indeed gulp its big mouth over my dad's entire arm once, when Daddy was fishing, and when we were kids (early 70s) an urban myth began to circulate about this giant bird in the Valley, and people took to calling it Big Bird. No facts on that one, unfortunately.

So--those facts are now on record, Mary. Somehow, I overcame these terrors and now I watch birds for amusement!
Posted by dguzman at 3:02 PM No comments:

Okay--meeting one of my birdy wishes today and listing the birds I've documented on my life list. I have an original Peterson's birding guide first published in 1934, and it's got a life list in the front--very handy. I'm listing even the more common birds here (robins, etc.) just for grins. And I'm only counting the birds I've actually been able to identify with certainty. The millions of seagulls I saw in my childhood trips to the beach, etc. will have to wait until I take my binocs and my birding books with me back to the beach. All these birds were seen in Central PA unless otherwise noted. Many were just seen on my first real birding expedition with some real birders--Alice and Roana Fuller, Dorothy Bordner, and another woman Nan from their birding club.

A little lame, but I'm working on it.
Posted by dguzman at 12:31 PM No comments: 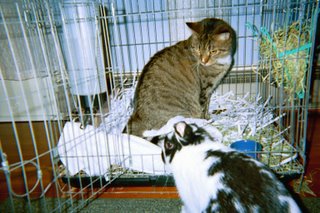 This isn't even a picture of a bird. It's our cat, Sweet Kitty Kisses, sitting in the cage of our bunny, Niblet. He doesn't have ears because his mother chewed them off when he was just born. Apparently, this is common in the animal world--mothers eating their young (or parts of them, at least). He just has that little stump on one side. The other side is flat.

Because I don't want a flurry of jealousy to occur, I'll also include a photo of Miss Kitty Claws, our other cat. 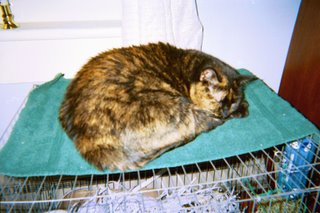 Both kitties are birders as well, often practicing their bird-calling skills from their perches in our open windows. I'm sure their motives are just as pure as mine--just to watch our feathered friends do what they do. . . .
Posted by dguzman at 1:14 PM No comments:

My binocs are an old pair of Leupolds I picked up for twenty bucks at the antique flea barn in Fort Worth, TX. (I used to live there--native Texan.)
The specs:
9x35 magnification
7.3 degree angle of view

Is that good, I wonder? I like them. They're pretty old, I think. They have gold rings around the eye chambers (chambers?), focus adjusters for each eye (definitely awesome when you wear contacts), and they smell kinda old and neat. I like them very much. I checked the Leupold site and found that their "gold ring" series (is that what I have, because mine have the gold rings?) are pretty expensive. Maybe I got a good deal for $20. Who knows? They work, anyhow.

Maybe someday I'll get some really powerful and expensive ones. But I doubt it. I spend most of my meager pocket money on snacks and food, woodworking tools and wood, and other such non-bird-related hobbies. Still--this birding thing is a lot of fun.

What kind of binocs do you have?
Posted by dguzman at 11:31 AM No comments:

What kind of bird book do you have?

So the first thing I got when I wanted to start birding was a book. I bought one of those little Audubon mini-books with full-color photos of birds of the East (I live in Central Pennsylvania). I definitely prefer color photos rather than the color illustrations.

I used that for a couple of years--not much variety in that book, and certainly it's more of a "oh, I saw that bird the other day! That's what it's called!" kind of book. I realized I needed a true birding book.

At a local charity booksale, I found a copy of Roger Tory Peterson's first book--for only a dollar. It was first printed in 1934! It's an incredibly easy to use, helpful book. Lots of illustrations (what do you expect for 1934?), descriptions of the birds, key identifiers of different types of birds, transcriptions of bird songs, etc. The book has been very helpful.

I've been told by a real birder that I need to get the newest edition, but I'm kinda attached to my old little hardback guide. Still, I suppose next time I'm at the bookstore, I should check out the new one. Probably has lots of photos and stuff. I wonder if Peterson is still alive.

I've heard of other guides--Sibley's, the Stokes'--but I'm partial to Peterson's.
Posted by dguzman at 11:21 AM 4 comments:

What I'd like to have happen on this blog at some point:
1. photos of birds
2. a digiscoping camera thingie to take photos of birds
3. my life list
4. someone big-time like Birdchick reading my blog--even once!
5. questions for other beginning birders

Welcome to Beginning to Bird!

This web site is especially for people new to birding, like me. I've always loved nature and watching birds, but I'm making the formal declaration now that I am a "birder"--albeit a novice one.

Welcome to my site, fellow beginners! If you're a pro and you happen on this site--enjoy the laughs you'll no doubt get at my feeble and amateurish attempts at both blogging and birding.
Posted by dguzman at 10:59 AM No comments: