There are many sites out here in Central PA where people have seen Black Terns--Julian Wetlands, a place I've birded loads of times, being the most common--yet I'd never seen one until I found my new favorite place to bird, along Tadpole Road in Pennsylvania Furnace.

Unfortunately I didn't have my camera with me and my cell phone was dying, but I managed to get enough power to snap a quick digiscope pic of the tern as he sat for a bit: 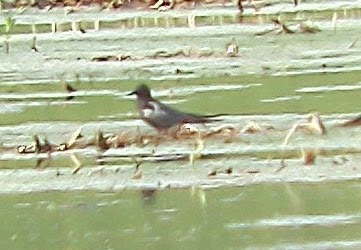 That's bird number 306, a real beauty. I watched him for almost a half hour, mesmerized. What a pretty bird.

Also noteworthy: I wouldn't even have seen him without word from the local listserv; most of the time the bird was flying around like he was hawking for insects or something, and he moved so fast I might've missed him had I not seen a digi-video on another's birder's website. Thanks, Drew!
Posted by dguzman at 5:25 PM 1 comment:

Last night after work, I took a tiny detour into the Scotia Barrens to listen for whatever birds might be calling at about 8:45pm. I heard mostly spring peepers, but I also heard a Whip-poor-will calling in the distance, and then I saw this: 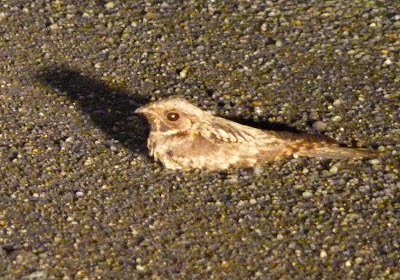 This little guy was sitting on the road as I drove slowly, listening for sounds. I only took a couple of quick snaps and then swung way around to give him plenty of room. I don't know if he even flew off the road as I passed; I didn't hear or see anything.

I'm pretty sure this IS a Whippoorwill; I looked at Common Nighthawk, but they have barring on their breasts and darker tail feathers. So -- I'm thinking Whip.

I've been sneaking in tiny snippets of birding while working, going to the grocery store, etc. -- time is just crunched right now, as I try to cram everything into every minute of this spring. I've been lucky enough to happen on some lifebirds during these little sneaky snippets!

A few nights ago, I stopped at a local hotspot near the turf where I was working, and I happened on some real gems. The first thing I saw was a Black-bellied Plover in breeding plumage -- finally! Oh, and I must apologize for the poor photo quality; I'd left my camera at home, so I was digiscoping with my cellphone camera at about 7:30 or so in the evening -- no light! 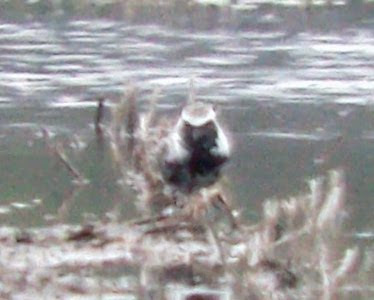 So cool--I'd only ever seen them in winter garb in Texas!

Then I saw this little guy: 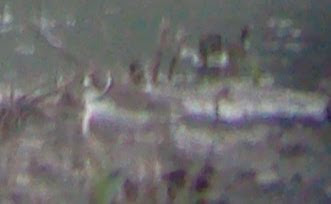 Semipalmated Plover! Lifer number 304! What a cute little bird this is. Gotta love those plovers.

Then the other day, as I headed to work again, I left a little early and stopped by a new little conservation area right down the road, the Barrens to Bald Eagle Corridor (aka B2B). I'd heard there were Bobolinks there, and I wanted to see and hear one. I was not disappointed! 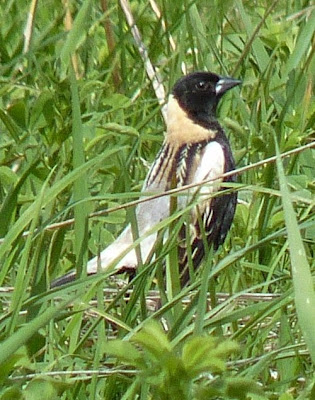 What an insane little song! And look at all that patterning on the back; it's like herringbone or something. That's number 305, baby!

I also saw and heard tons of Eastern Meadowlarks: 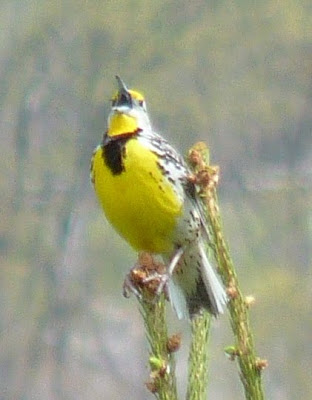 Spring of the year!

Yesterday, I wanted AB to hear the song, so I took her out there, hoping to show her the Bobolink and the Eastern Meadowlarks she'd admired when I showed her my pics from that day. So we get there, and OF COURSE she spots a Bobolink and an Eastern Meadowlark in the same tree, right off the bat, no problem. SOME of us have waited for YEARS to see a Bobolink, but AB gets out of the car and practically trips over one.

But I'm not bitter.

Now it's time for FEEDERFIRSTS!
You'll recall that in our last segment of FeederFirsts, we saw a beautiful male Indigo Bunting that came by to partake of the seed. On Thursday, we had another FeederFirst that really made my day: 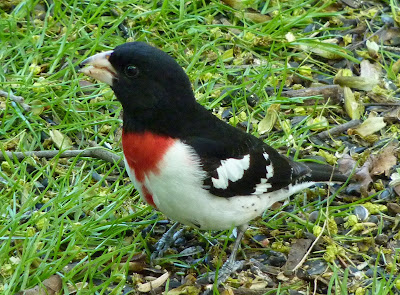 YES--a few people on the local listserv have been reporting that, for the first time ever, they've had RBGR at their feeders. Glad I could join in the conversation!

I'll leave you with this rather stern look from a Tree Swallow: 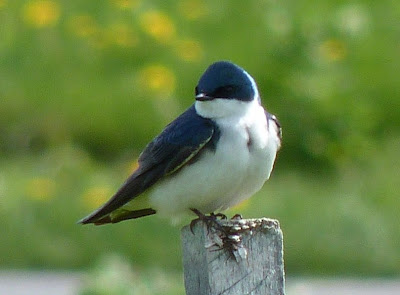 Gretchen and I went birding on Sunday and actually made it out into the field at 7 a.m.! Though conditions were less than ideal--it was in the 60s with overcast skies the whole time, with winds every once in a while building up--we still were richly rewarded for our efforts!

First and foremost, I saw my absolute favorite bird, the Blackburnian Warbler: 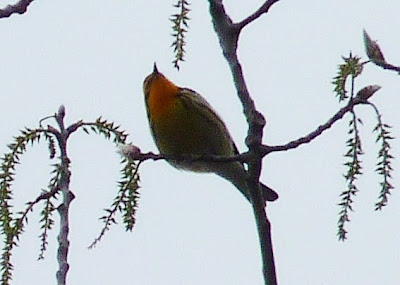 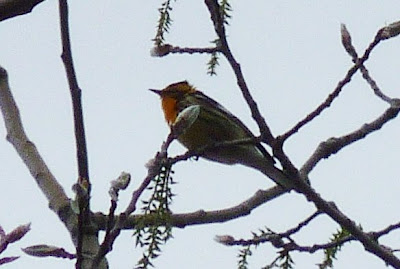 You can see that backlighting (and frontlighting, for that matter) was awful, but I managed to lighten these up enough so the fiery orange would show. We saw several of these birds, which was a real thrill; I hadn't seen one since my atlassing days several years ago. Not seeing your absolute favorite bird for so long can lead to, when the bird is finally seen again, little fits of tears, inability to stop smiling, and a serious case of warbler neck as one peers into the trees for "just one more minute!"

We were going for as many warbler species in one trip as possible; some of the local birders on the listserv have been posting numbers in the mid-teens, so we at least wanted to get close to that, especially in light of the fact that we're in training for the PA Migration Count coming up in a couple of weeks. (Gretchen volunteered to lead the effort at our local Toftrees State Gamelands area, which means that we won't get to do what we usually do: hang back behind the "real" birders who are just listening and just kinda go, "oh yeah, BTGreen, BTBlue, and Prairie, right, uh-huh..." and shrug. More on this effort in another post.)

Some more photos from our quest: 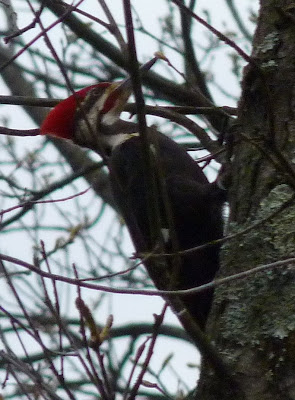 Two Pileateds were hanging out, one in a tree and one on the ground, and I should've gotten a better photo but I was too slow.

A terrible shot of a Black-and-White: 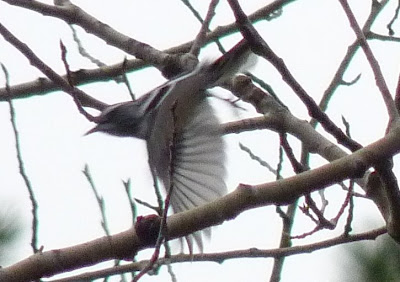 This American Redstart came within a couple of feet of my face, so close I could barely get my camera up and snapped in time: 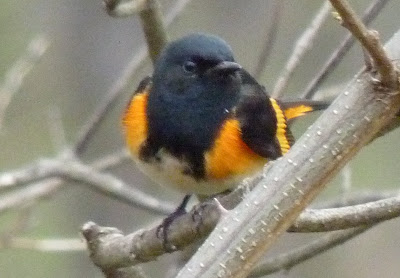 He was right up in my grill!

And finally, a Rose-breasted Grosbeak after not having seen one since like 2006! 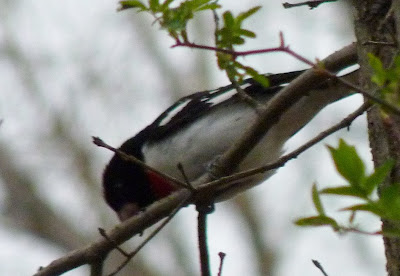 Hadn't seen one of these in years either!

Of course you know I was also on the lookout for life-flowers: 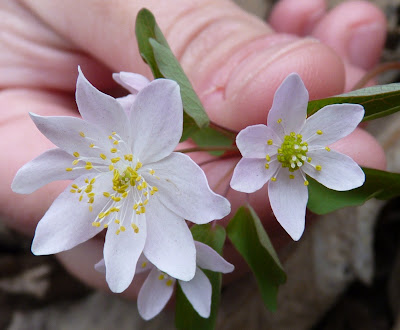 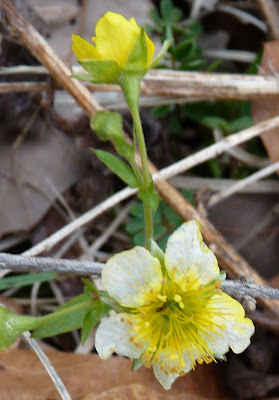 Mystery flower -- some kind of cinquefoil? No clue.
We also got to see some tadpoles! 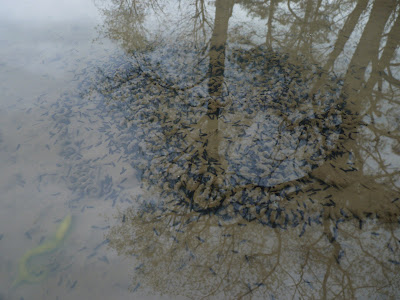 The water was so cold they weren't moving very much at all; it's hard to tell but there are literally hundreds of them in this photo, all in a little swirl.

Our final checklists from the road through the Barrens and then from the pond area, with a grand total of 14 warbler species!

We also had an owl swoop across the road right in front of us, but all I saw was buffy-brown and white. Maybe a Barred, judging from the size and colors? Who knows. Certainly not a good enough look to call it a lifer, dangit. We tried following it into the woods; "ha ha!" he must've said, "as if you'll ever find me!" At least I didn't get any ticks on me.

Not that I've found, anyway.

One other note: we had a FeederFirst! (I should trademark that!) yesterday morning, an Indigo Bunting! 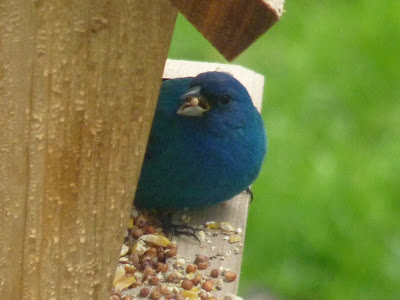