I have finally gotten/made some time for a little birding, both last night and this morning. I hit two points quite close to home: Wharton Point (on Maquoit Bay) and Simmons Point (on Middle Bay). Here are my results:

Wharton Point, last night: The tide was in, unlike last time when the tide was out although it was about the same time of day but two weeks ago. I got lucky and found a flock of peeps huddling together and shivering in the cold: 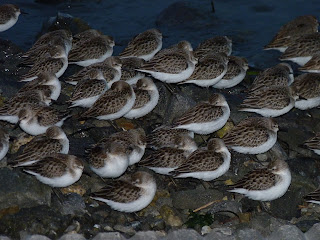 I counted the flock both there and in my photos, and I got 166 Semipalmated Sandpipers... 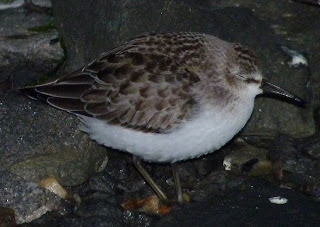 ...and four Dunlins, including this juvenile: 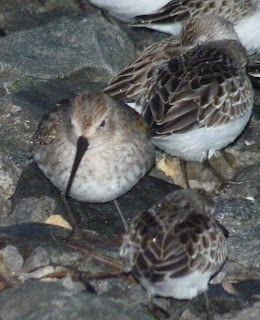 Here's a shot of both species: 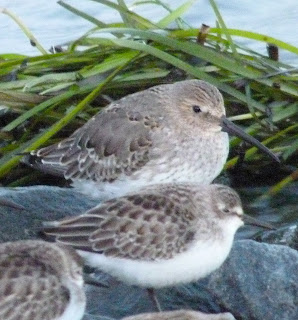 A view of the bay:

The wind chill must've been in the low 40s.

This morning, after seeing a report on eBird of a Red-necked Grebe at Simpson Point, I went there. Here's the boat launch: 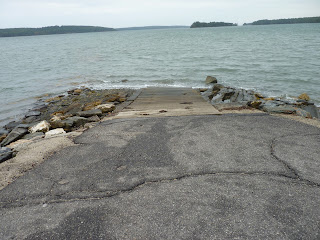 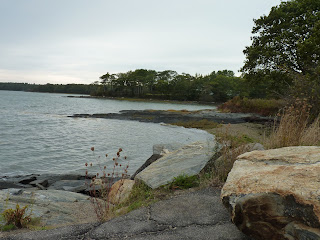 and the bay with some small islands:
I got no photos here, as all the birds were way out on the water. Again, it was chilly and windy and overcast, so photos would've been ridiculous. Still, I got some nice birds:
Canada Goose  19
American Black Duck  9
Common Eider  13
Long-tailed Duck  1
Double-crested Cormorant  19
Snowy Egret  1
Ring-billed Gull  54

There were more birds out there but I couldn't make any confident ID due to distance and conditions. My little Meade Condor scope was working as hard as it could, but I'm pretty sure that Gretchen's Vortex scope (a Razor, I think) would've performed better. Someday, maybe I'll spend the dough, but for now -- I just can't do it. I also saw a dark sparrow for a split second, but I couldn't ID it in that short a look.

I thought you might also want to see the house and the yard, so I took some pics. We'll start with the outside: 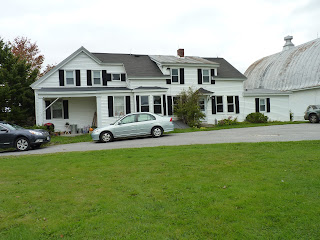 We live in the left half, the front half. It's three bedrooms, two floors, a nice-sized kitchen and a bath (downstairs, while the beds are upstairs - unfortunately). Here's the big barn on the property: 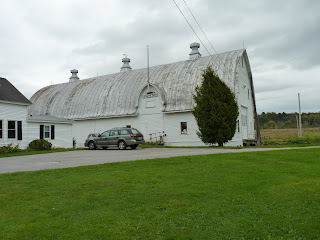 Wish I could say I have access to such a fabulous place, but it's off-limits. Our landlady runs her business out of it. It's part of a farm: 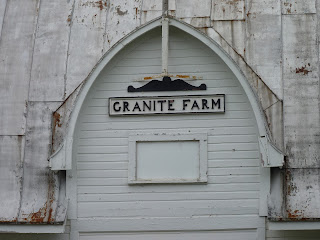 And there is granite EVERYWHERE.

Here's the cool weathervane on top of the barn: 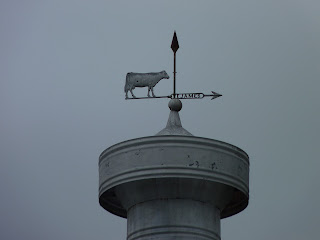 and there are five or six old-fashioned lightning rods: 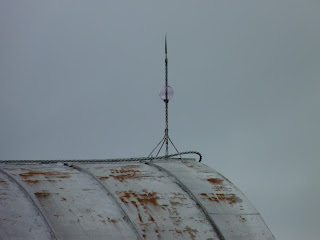 complete with the glass globes. I love these!

The grounds are rather extensive: 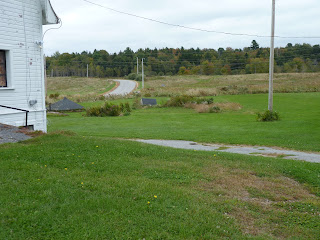 Back there right in the middle is where my veggie garden will go in the spring.

Part of the front yard, including the woods across the street in which I heard the Barred Owl: 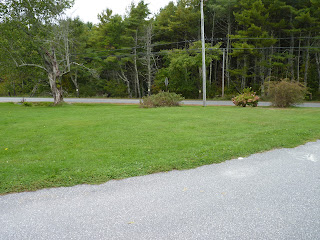 And this is the side yard: 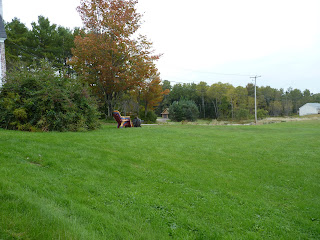 You can just make out our firepit and Adirondack chairs out there.
Posted by dguzman at 2:12 PM 3 comments:

I haven't had a ton of time to go birding here in Maine, as we've been unpacking and I've been getting up to speed on my new job (same as my old job, just with different everything but the title and the duties -- but it's all different here, and I'm still waiting to get sales turf, etc.). Still, I've put up the bird feeders and we've had some good action!

So far, we have the following:
American Goldfinch
House Finch
Purple Finch
American Crow
Eastern Bluebird
Black-and-white Warbler (cool!)
Black-capped Chickadee (the state bird)
and, just the other night, BARRED OWL! Calling in the woods across the street! AB heard someone asking her "who cooks for you?" as she was arranging things in the dining room; she called me and we went outside and heard him! I did my fabulous imitation, and he responded several times! Lifer!

Not a bad haul. I've got some nice feeding stations set up, but mostly we get finches. Nothing exotic (yet), but I'm hopeful we'll get some good winter finches. I just set up some suet and a feeder under our pine outside the living room windows (where we got the Black-and-white Warbler yesterday), so I'm hoping to get some real action there.

I'm hoping to spend some time this weekend on the coast and in some of the local hotspots; we're like ten minutes from the coast, although I hesitate to call it the ocean, as we're really just near one of the fingers of water that cut into the coastline of Maine: 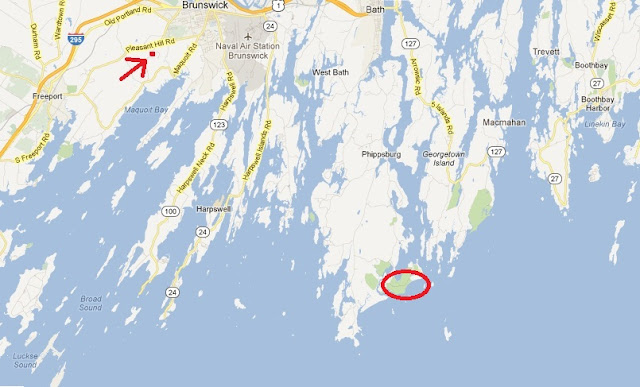 That arrow points to the dot showing where we live, about two miles outside of Brunswick. The circled area, Popham Beach State Park, is actually on the ocean, but I didn't even take my bins; we were just going to spend some time together walking in the sand and soaking up the late summer/early fall sun on Labor Day. The scale on this map is such that it's 26 miles from my house to Popham Beach (up and over and down).

You can see we live very near Maquoit Bay, and I'm hoping to get in some good birding there this weekend. There's also Mast Landing Bird Sanctuary about five minutes away from us.

I need to study so hard: pelagic birds can be seen from places like Popham Beach, and I wouldn't know a shearwater from a gull at this point. I've been able to avoid looking at any kind of pelagic birds for a long time in my birding life; now I've got to catch up.

Hope to have some good reports for you after the weekend.
Posted by dguzman at 10:38 PM 6 comments:

It's official: we moved to Maine last Wednesday, I've had a bite of lobstah and a mussel, and soon I'll have Maine plates on my car. I'm a Mainah!

Actually, it's apparently very hard (hahd?) to become a true Mainer. Many generations must live here, work here, die here. So we're not really Mainers, but we are Maine residents and (as soon as I get back there from a work-related training thing in Chelmsford, Mass) will soon be registered voters and car owners and licensed drivers of Maine.

Here are some pics from Popham Beach, where I watched a Herring Gull steal a paper sack out of someone's unattended bag: 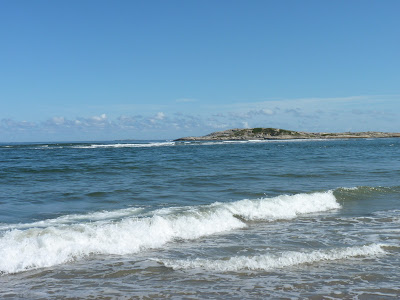 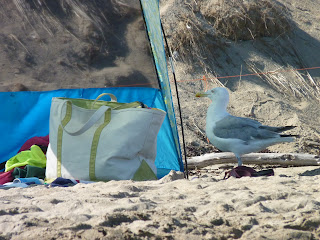 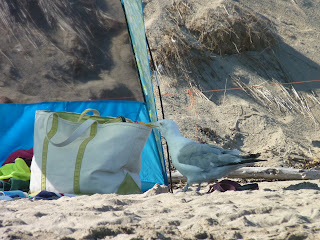 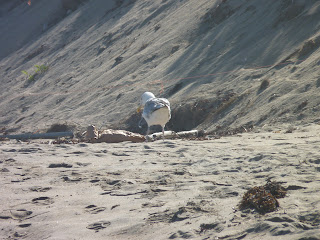 So far, we've only had time to play around a little. A zillion thanks go to the in-laws who helped us unload the cubes last Friday. We're still unpacking boxes, but we did take some time to go to Wolf's Neck State Park (awesome!) and Popham Beach State Park. Birds seen were pretty expected: mostly Herring Gulls, some Canada Geese, a couple of Laughing Gulls, American Goldfinch and House Finch, and the like. I don't think I'd know a ranging pelagic bird if it bit me on the nose, so I have a lot of studying to do.

Now, as I mentioned, I'm stuck in Chelmsford until Thursday but then I can go back home. I can't wait for the weekend!

There aren't a lot of reports from my area on eBird, but I have seen a few hotspots in the area that I can try. I live pretty near to the coast and to a bird sanctuary, so I'm hoping to get some time this weekend to bird a little bit. I've signed up for the state listserv, and I'm on the lookout for other Maine birding resources. Any suggestions? I live in Brunswick, which is Mid-coast, but farther southwest than the bigger Mid-coast places like Camden and stuff (the cities mentioned on the Mid-coast Audubon Society page).

AB's mom gave me a couple of Maine birding books, so that's helped tremendously. Now it's just a matter of finding the time to get out there before the migration is over!