After wanting to see the northern lights ever since I was a child, I finally saw them (it?) last night!

I was awakened by Cornelius (of course, the pig wanted food), and when I came back up the stairs after feeding him and the other babies I glanced out my office window. Even without my contacts or glasses, I saw a bright flashing outside to the north. I ran and grabbed my specs and looked out to see a strange glowing in the sky, vertical stripes of brightness, one of them pulsating brighter every couple of seconds or so.

Thanks to night mode and a tripod, I was able to capture it: 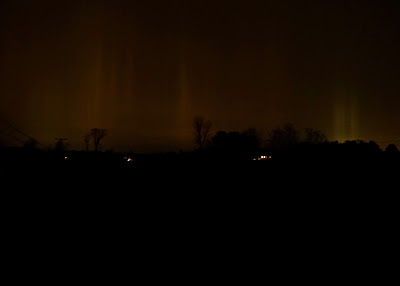 Here, you can see the whole scene; the brighter part to the right was flashing.

Off to the left was one single shaft of light, barely visible here: 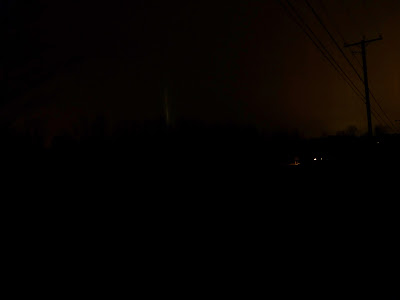 And here is the main part, flashing again: 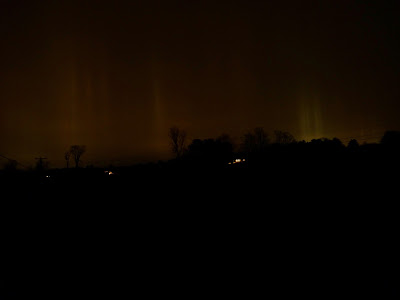 What a thrill! I watched for about a half hour, awestruck by the spectacle.

Today, we're having to wait for Nemo, the big storm that's supposed to dump a couple of feet of snow on us tonight. The weather people have been hyping this up for the last couple of days, so I hope we see some real snow. Of course, it's easy for me to wish for this, as I'm still out on medical leave from my concussion, suffered last Monday. I mentioned it on Facebook; I just slipped on some ice and fell, bouncing my head on the ground. I am slowly recovering my ability to focus, after doing NOTHING for about a week. I was not allowed (by my doctor) to watch TV, play online, or even read a book. And of course, watching TV was completely overwhelming and headache-inducing anyway. I posted on Facebook after it happened, and then I was out after like five minutes.

I'm now able to watch TV, but I can't multi-task yet. Normally, I would be writing this post while watching TV and maybe having a conversation with AB. Not anymore, at least for a while. I am only able to do one thing at a time. No watching TV while playing Spider Solitaire on the iPad; no reading a book while mapping stuff on the computer and taking some notes on a notepad. I've only been allowed back on the computer (and online) for the last couple of days, though I get tired pretty easily.