Thanks for the owl!

On Thanksgiving, AB and I went to Bethel to spend the holiday with her parents and grandma. We all had a great time, including a Scrabble victory by yours truly (courtesy of an illegal letter trade from AB's mom so I could spell fusilium (which I don't actually know is a real word heh heh), use all my letters (a BINGO!) on my last move, and end the game! A whole lot of cheating went on there, I think, but it was all in good fun!

I had also seen on the Maine listserv that there had been a Northern Hawk Owl seen near Fryeburg, which was only a 40-minute drive from Bethel, so how could we NOT go try for the owl?

Usually, what happens on these little "twitching" missions when I drive for a bird, I "dip" on the bird -- I don't see it. (I don't know who thought of these terms like "twitch" and "dip;" I just picked 'em up on the listservs). I drove over three hours once with Gretchen and birding heroes Alex and Anna to see a Black-headed Gull. Result: Dip. I've dipped on crossbills in Pennsylvania, Eastern Grosbeaks in Maine.

So what happened this time? 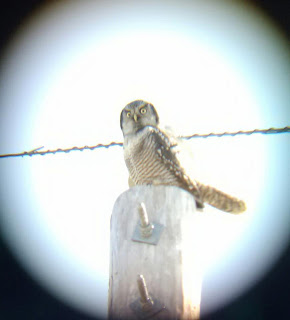 Northern Hawk Owl, digi-binned with my phone-cam and bins! It was awe-inspiring. We got to the road where the owl had been seen; it was only about two miles long, so we just turned onto the road and crept along, eyes peeled. Wouldn't you know that AB saw it first with her eagle eyes.

AB: That light pole looks taller than the other ones....
DG: (head swiveling all around) Where, where?!
AB: Look, right over there (pointing)!
DG: OH MY GOD! THAT'S HIM!
He was perched on a pole about 50-60 yards away; he then flew into a tree in front of a farmhouse, about 100+ yards away.

Suddenly, he flew out of the trees STRAIGHT AT US! He flew across the road, in front of our parked car, maybe ten feet away! He then swooped straight up and perched on the light pole right across the road from the car!

I was on the passenger side, across from the owl, so I sllllooooowwwlly opened my car door, laid my bins, pointing up toward the owl, on the roof of the car, put my phone up to the bins, and snapped away. I got several photos, including the one above, and then crept back into the car. He just looked at us for a few more seconds, with full-on disapproval, and then flew away.

AB and I just kinda sat there, totally freaked out. That moment was among my best birding experiences of this whole year. Even AB loved it.
Posted by dguzman at 9:42 PM 1 comment:

We're having a winter finch blowout up here in Maine, but I've struck out every time I've gone looking for them... UNTIL TODAY!

This morning, someone on the listserv posted that there was a big flock of them in the crabapple trees outside the L.L. Bean HQ about ten minutes from here. So I actually got out of bed before 9:30 (which rarely happens!) and drove down -- and there they were! I heard their little two-note high-low "PEEP-peep" calls, looked up, and there they were -- lifers. 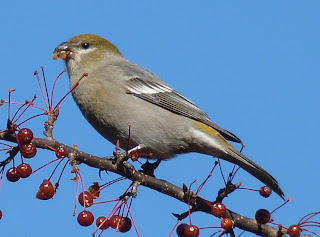 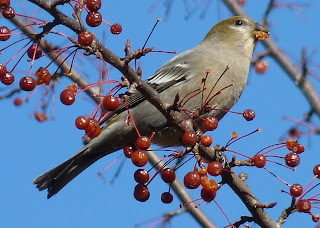 Beautiful! And they were so accommodating, posing for me with the beautiful blue sky as their backdrop.

Last night, I had gone to buy birdseed at a local dealer who'd had some PIGR at their feeders, but all I got were piggy little House Finches: 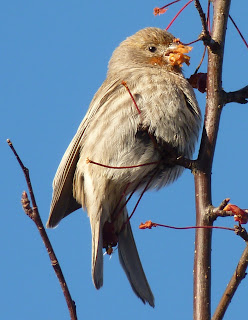 I've got to plant some crabapple trees soon; they're magnets for winter finches!
Posted by dguzman at 12:07 PM 2 comments:

First, some old business: Lifer Greater White-fronted Goose! Saw this one a couple of weeks ago:

Look behind the Canada in the middle! 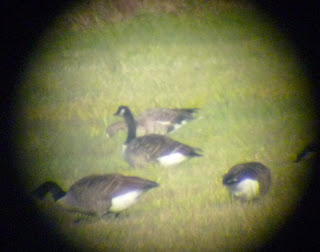 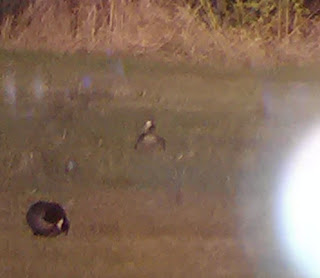 I know, I know, it doesn't look like anything! But he's back there, I promise!

Nearby, I found this immature Bald Eagle -- and he has bands on both legs! 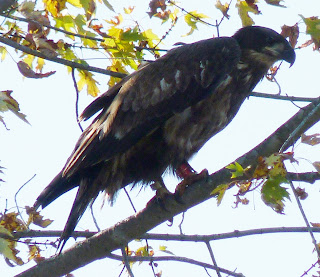 My first-ever banded bird! I can't read the bands, but it was cool to see.

Now -- to today. This morning, I went to a new spot: Head Beach near Hermit Island. It's a few fingers of land over on the coastline. What a great place! 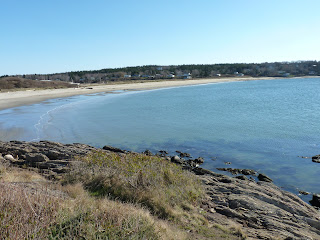 There's a nice sandy beach, and then big rocks up on one side. I'm standing on one taking this picture.

Here, I'm standing in the dunes looking out onto the ocean: 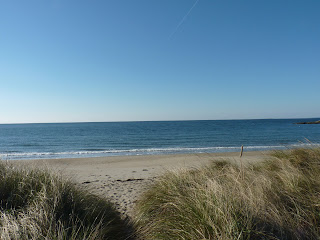 I saw a VERY pale sparrow on the beach: 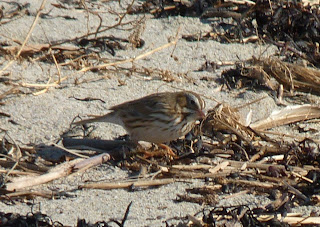 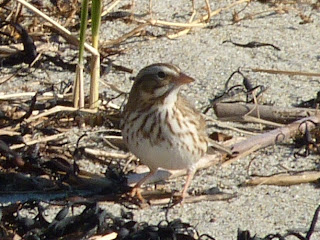 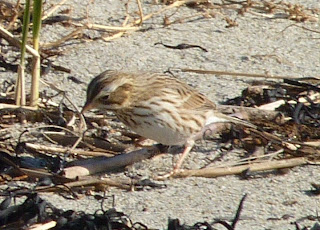 He fits exactly Peterson's description of an Ipswich Sparrow, now a subspecies of Savannah Sparrow: "Ocean dunes; like large pale Savannah." That's exactly where he was and what he looked like. No longer its own species, but still nice to see -- he was beautiful with his light streaking and overall paleness.

The sand, as the tide went out, proved to be not only beige but black: 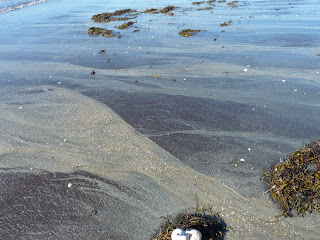 And the black had bits of quartz or mica in it and the bits shone like diamonds in the sunlight. Here's a video:
I did see a couple of Red-necked Grebes, frolicking among the waves along with Red-breasted Mergansers and Common Eiders, but they were too far away to get a photo. Luckily, a guy on the beach who was also birding confirmed my ID -- lifer! I now have every grebe except Clark's, but I'll have to go out west again for that one.

A beautiful sunny, crisp day at the beach! Finally, I leave you with a picture of some Moon Snails! 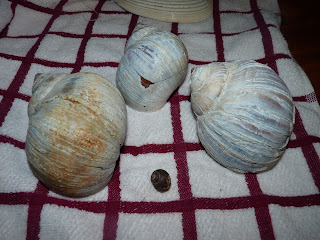 Note that each of those white boxes with maroon lines is two inches x two inches. The snails were bigger than my fist! That little tiny dark circle is a small snail about 3/4" big. The others are HUGE.
Posted by dguzman at 5:01 PM 3 comments: