Chattin' with the chat

As I mentioned in my last post (also done today), I went after a Yellow-breasted Chat that's been seen at Bald Eagle State Park, about 30 miles from my house.

The key to finding the bird was, of all things, patience. Gretchen and I had missed on the bird the other night because we just didn't wait around long enough, I think. This time, I went to the tree where the bird had been seen and just stood and sat around, listening to the millions of Gray Catbirds and Red-winged Blackbirds. After about 30 minutes, just when I was just about to give up (isn't that always when the good stuff happens?), I heard the craziest sound: a single-noted call, but not a single note; it was more like several notes in harmony, a chord, almost a twanging sound. This was nothing like any other bird I'd heard before. I first thought it was a catbird showing off, but I kept hearing it, and that's when I saw the unmistakeable flash of deep yellow. First, he was skulky, giving me only little glances: 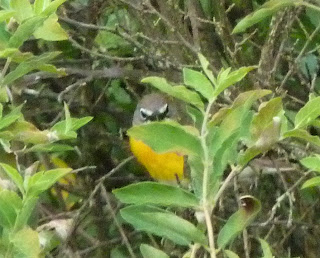 but then he did what Gretchen had told me he would do: he picked a spot and sang from it, although only ever the one note, the twang. 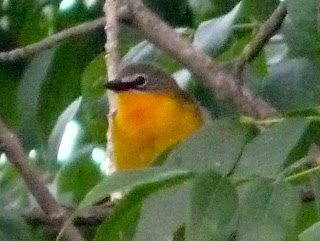 It sounded NOTHING like the call on my Stokes CDs. 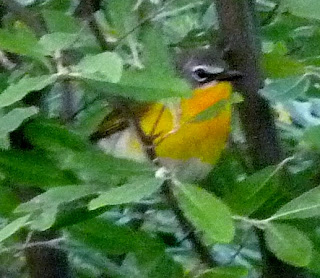 I'm so far behind in updating this blog that I'm just going to hit some highlights of my spring migration so far -- and there have been plenty!

AB, Gretchen, and I went camping at Oil Creek during the first weekend in May. Our list was impressive; we had 17 warbler species, a zillion Baltimore Orioles, and all kinds of neat birds. Unfortunately, what we didn't have was a working camera (long story). So despite all the amazingly up-close views of warblers and vireos to which we were treated, I have no photos. Typical.

I hadn't seen many of these birds since I attended my first-ever birding festival there at Oil Creek in 2006 and birded with Julie Zickefoose. This time, though, it was all up to Gretchen and me to find and ID all the birds;  in 2006, we scored 13 warblers -- this time we got 17! The funniest thing about the 2006 post, though, is to look back at what birds were lifers back then for me: Hermit Thrush? Wood Duck? Ha ha ha! I was REALLY a beginning birder then!

So anyway, I wish we'd gotten photos, but sometimes it's better to just look at the birds.


Soon after that, I FINALLY got a Yellow-throated Warbler, after many near-misses and "didn't we see one already?" incidents. I went to Lederer Park in State College one morning in May and despite being there for about an hour and a half, all of the warbler action happened in an eight-minute span. Weird. That's when I heard and saw the following, all in rapid succession: two Tennessee Warblers arguing over territory, then a Nashville Warbler, then an American Redstart, then the "I am so lazy" of a Black-throated Blue Warbler, then the downward churry-churry-churry of the Yellow-throated Warbler. I even BirdJam'd it to confirm it. What a great lifer! I saw only a glimpse of the bird flitting through the trees, but it was without a doubt a YTWA.


Later that morning, as I drove away from Millbrook Marsh in State College, I saw my first Orchard Oriole since my old atlassing days, and I EVEN got a photo! 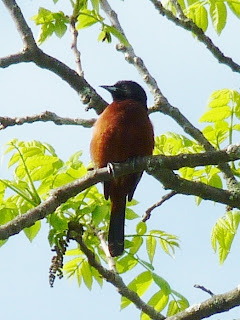 Pretty bird. His belly and chest were so fluffy looking.


Since then, I've not had a lot of time for birding, but as soon as I finish posting this I'm driving to Bald Eagle State Park to look for a Yellow-breasted Chat that's been seen there lately. Gretchen and I missed on it the other night, but one of the many generous and helpful birders on the local listserv gave me better directions so I'm hopeful I'll get lifer number 338 tonight.


A careful look at my blogroll reveals that I have a new blog (despite my inability to update this one very often!) to capture some of my woodworking adventures. I've got tons of updating to do on that one, so if you're interested in seeing an amateur's efforts to build furniture, do chip-carving, and other types of homey things, check it out.
Posted by dguzman at 6:53 PM No comments: