We've had a first-year female Cape May Warbler hanging around the pines in the backyard for the last three days: 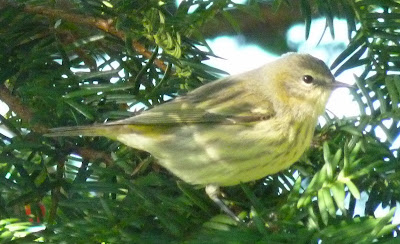 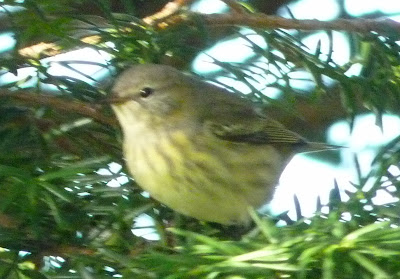 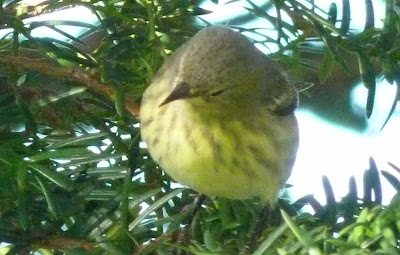 If it looks like I'm right there next to the bird, it's because I was. She was surprisingly tolerant, flitting right at eye level and over my head in the low branches of the big pine and the yew shrubbery under it (A SHRUBBERY! hee hee) as I photographed her.

Pretty cool. Baby G came over and saw it yesterday and tonight -- a lifer for her!

No, we don't have too many fall leaves turning yet, but we do have a lot of nice fall flowers blooming. Gretchen, her gf, and AB and I went camping at Greenwood Furnace (they have a great pair of very isolated walk-up sites that we love) and got some great flower and mushroom photos. The best bird of the trip was a beautiful Ovenbird just above eye-level who gave us quite a show, including raised crest just like Crossley shows; unfortunately, he dashed out of sight before either of us could snap a photo. Flowers are infinitely easier to capture! 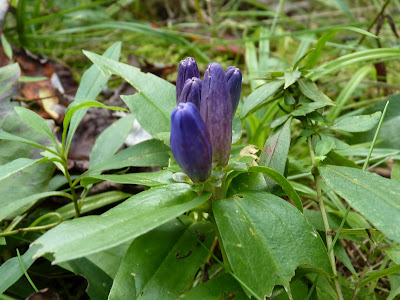 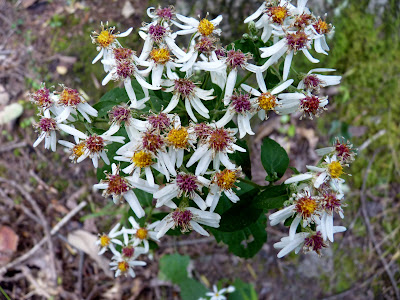 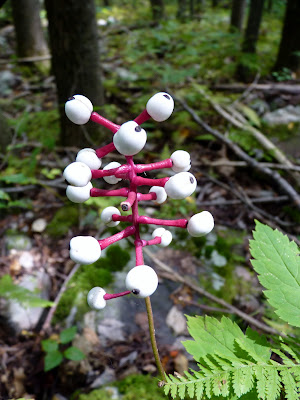 the seed pods from Doll's Eyes, which are kinda creepy 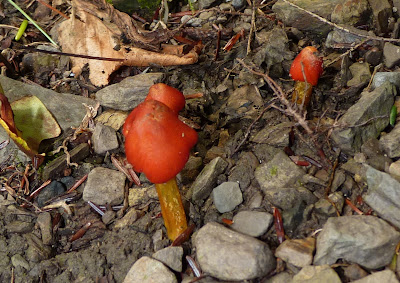 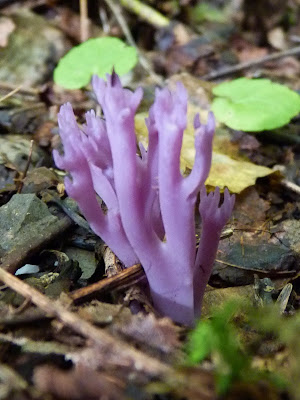 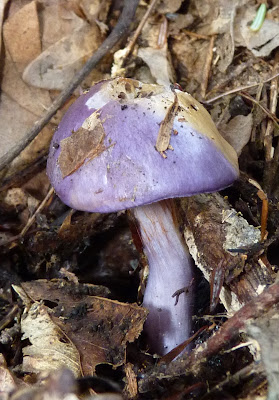 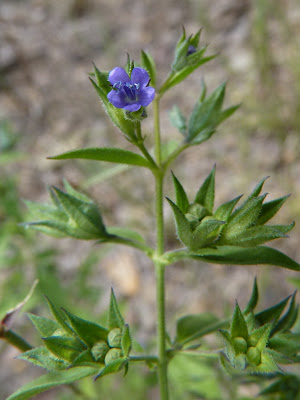 couldn't ID this one -- any ideas? 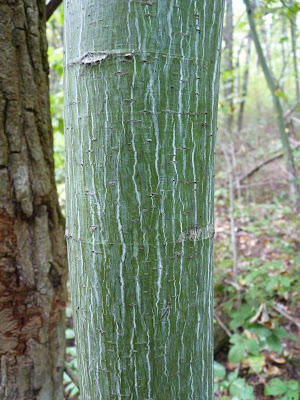 Is this a Striped Maple Tree? Here are the leaves: 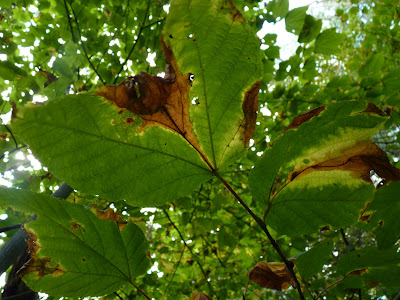 Saw some nice moths; at least I think the second one is a moth: 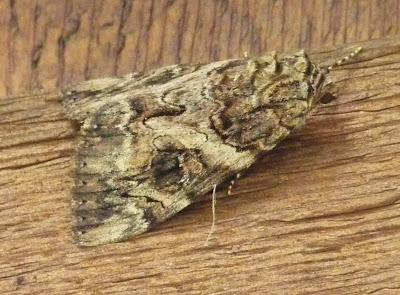 there's nothing for scale, but he was at least two inches from tip to wing-end! He's a beauty! Perhaps some kind of underwing? 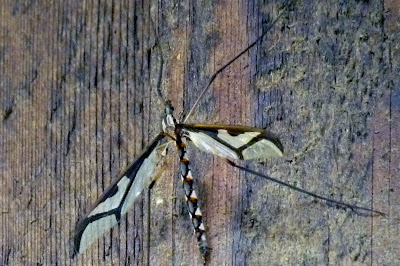 I don't know if this is some sort of clearwing moth or some gigantic mosquito hawk -- again, with nothing to show scale, it's hard to see that he's about 1-1/2 inches long with a 2-inch+ wingspan. Per Wren, my friend from Cape May, it's a Giant Eastern Crane Fly, Pedicia albivitta, and quite a beautiful little specimen. Harmless, per What's That Bug?

And some soon-to-be moths! 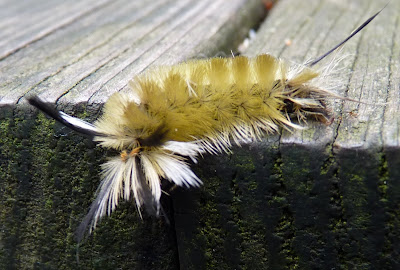 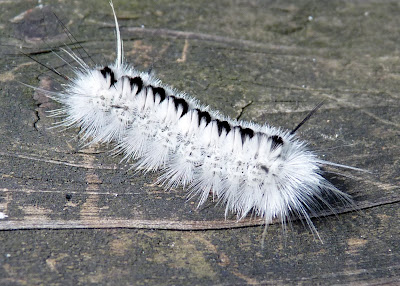 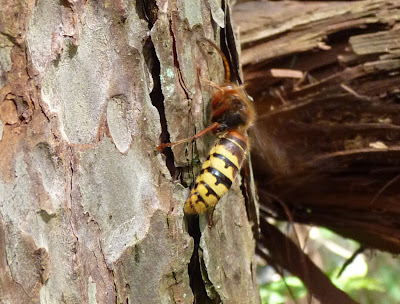 He was at least 1-1/2 inches long! I have gone through all the images of clearwings on the Bug Guide site, but I can't find one with this pattern of body -- many are close, but not exact matches. And if he's a bee or wasp... holy moly. His wings were constantly flapping, and he was very scary to someone who's allergic to bee and wasp stings -- like me. There's some discussion in the comments as to whether it's a Cicada Killer or a European Hornet -- not really sure. Either way, it's creepy and scary -- but it didn't display any aggressive behaviors, at least.
Posted by dguzman at 8:54 PM 7 comments:

Yesterday, Gretchen, her gf, and I went to the flooded farm fields on Nixon Rd between here and Pine Grove Mills -- where I got my lifer Vesper Sparrow -- in search of a rumored American Golden-Plover. Also seen there earlier in the day were a Baird's Sandpiper and a White-rumped Sandpiper. We only saw the beautiful American Golden-Plover (the ABA checklist hyphenates it for some reason, so who am I to argue?), though it was dusk and the fog was rolling in -- so no photos.

I was hoping to see it in better light today, but the clouds and rain blew out last night and no one reported seeing them after early this morning. Hmph. At least I saw the Golden, but I sure wanted to see the White-rumped. (I saw a Baird's last year at Bald Eagle State Park, though it would've been neat to see the two quite similar birds side by side, like they appear in the oh-so-awesome Crossley ID Guide, about which -- although everyone knows how awesome it is by now -- I feel the need to shout how awesome it is pretty much every day.
Posted by dguzman at 9:35 PM 2 comments:

Gretchen and I went to Scotia Barrens IBA between 1 and 3pm yesterday afternoon -- an odd time, and not normally a good time, but it turned out to be really good. We saw sooooo many warblers and flycatchers that we were overwhelmed, but we did our best to ID and even got some good snapshots.

We started off at the pond; the weather had cleared earlier so we didn't see much waterfowl. Still, look at this Pied-billed Grebe: 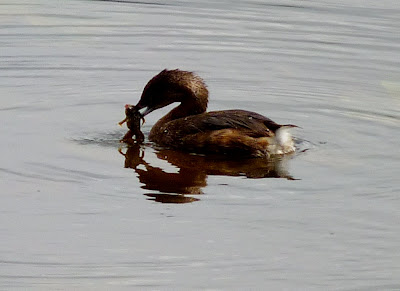 We then went down the road and saw several little flocks of migrating warblers, some still in breeding plumage but most wearing their "confusing fall warbler" outfits. 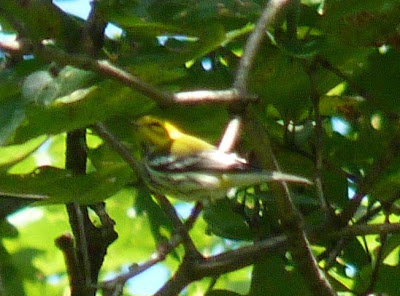 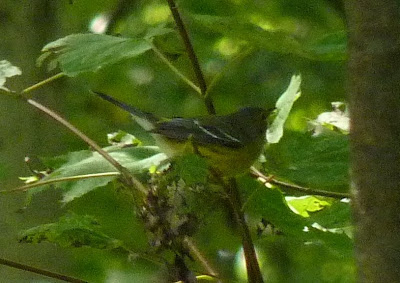 one of the many Magnolia Warblers we saw

Gretchen got this great photo of my favorite warbler the Blackburnian: 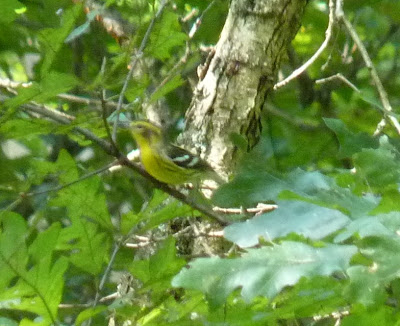 I would've written this off as a BTGreen--but look at the face. Crossley has a photo of a Blackburnian that looks just like this.

Our complete list, which contains three lifers (in bold) but I'm hesitant to count two of them. I feel good about the YBFL because I got good looks at it. However, the Philly Vireo and Acadian Flycatcher were ID'd solely by voice and not seen--I'll note this on my spreadsheet and in my margin to the right:

We also saw some good bugs and other creepy-crawlies: 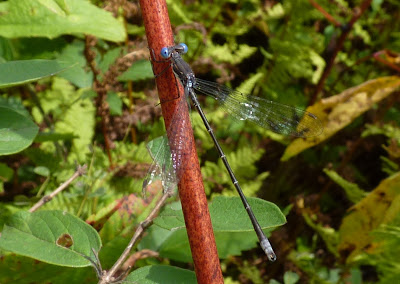 some sort of damselfly--per John, a kind of spreadwing 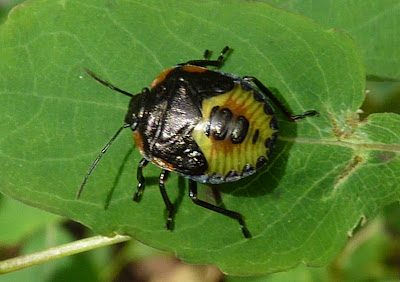 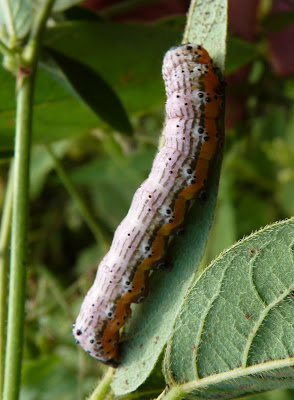 look at this beauty! I can't find this one anywhere in my moth book or online. Any help?
Per John, it might well be a Pyrrhia exprimens, or Purple-lined Sallow larva.
And it certainly does look like the photo on this web site.
And by the way, John mentioned a book that's sure to go onto my wish list: Caterpillars of Eastern North America by David Wagner. I loves the cats! Hello, Christmas present! 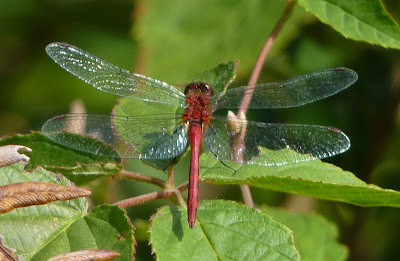 Red Darner? Nope -- probably a meadowhawk, per John. I thought perhaps a Ruby Meadowhawk, but they have black spots on the tips of the wings. Then I thought Red-tailed Pennant (a skimmer) but they aren't up here. So -- I just don't know enough! And if John couldn't give me an ID, then I might as well give up!

Thanks to John for all his ID help!

Of course I relieved my Warbler Neck issues with some flower-gazing: 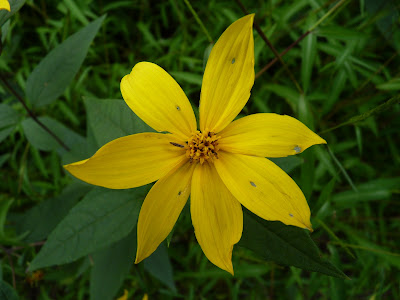 this looks most like a Giant Sunflower, only it's not that giant and there are fewer petals on it. Probably a garden escapee. 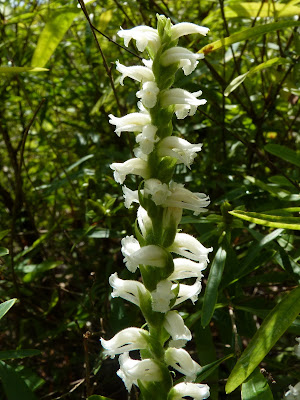 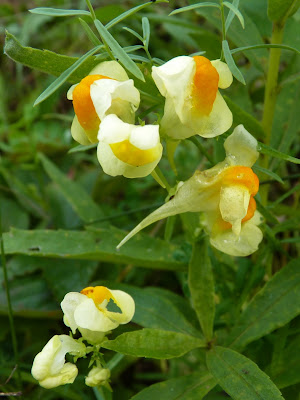 my old favorite Butter and Eggs 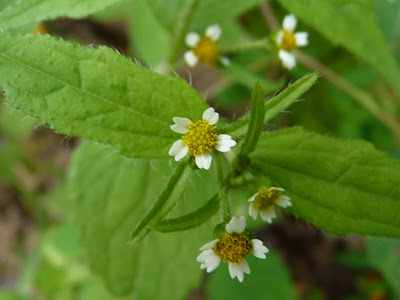 This reminds me of Chamomile; can't find it in my flower guides. Any ideas?
We went back to Scotia this morning with a big group, one of the many guided fall walks scheduled for this month. I was thinking we'd see everything we saw yesterday and more, and all the big-time birders would ID everything we couldn't get yesterday. No such luck -- it was really dead out there; nothing on the pond, a random Blackpoll Warbler, a bunch of chickadees and Cedar Waxwings. We had a brief moment of excitement when we saw a tiny group of three BTGreens and an American Redstart. Pretty disappointing.

But at least we went out for breakfast afterwards, and I got some outdoor time before the rain came (again). It's been raining almost non-stop for the last week, remnants of TS Lee. There's severe flooding in several areas of the state, but we got lucky here and only had minor flooding one morning. The worst of it went south and east of us. It cleared up and the humidity blew out yesterday just in time for us to have a wonderful day outside. Today? Not so much.
Posted by dguzman at 4:59 PM 3 comments: