Gretchen, LT, and I attempted to go birding yesterday. Here's what it looked like on the roads: 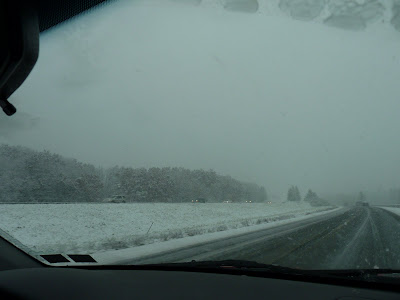 We'd seen text alerts about scoters, mergansers, and terns up at Bald Eagle State Park but, by the time we got out there in the heavy snow, visibility was terrible. The fog rolled in and we only saw one little Ruddy Duck, a bunch of European Starlings, and a sparrow of some sort.

I can't remember the last time it snowed before Halloween; we got about 3 inches of very wet and very heavy snow. We went out again today, a bright and sunny beautiful day, but again we were thwarted; the PSU rowing teams were out on the lake and there wasn't a duck to be seen. We'd heard there was a Red-necked Grebe out there, but it must've flown when the rowers started out.

I'll leave you with these photos of my babies: 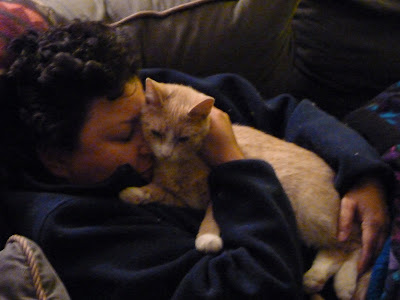 Cornelius is growing like a weed! He sure loves his mommy.

He also loves hanging out in Niblet's room: 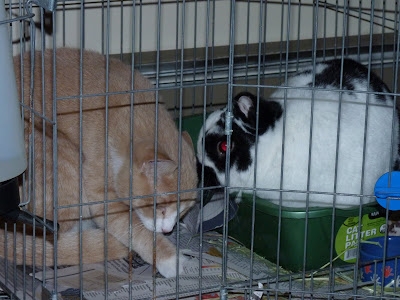 A whopper of a catch-up post - updated! updated again!

It's been a long while since I've had time to post all the observations and photos from the last few weeks of birding, so I'm going to combine it all into one giant whopping post. Stick with me!

Short of the trips to Cape May over the years, this has been one of my most productive fall migrations as far as new birds go. It's been fun learning some new hotspots in the State College area for fall migrants; Gretchen and I have tried to get out as much as we can, though work has kept us pretty busy and the weather (almost constant rain) has been against us a lot of the time.

Let's count 'em down by the location.

1. Circleville Farms: this is an area of fields and mowed paths with some great bushy undergrowth, lots of vine-covered small trees, and cornfields -- it reminds me a lot of the Beanery in Cape May. I kept looking for Phragmites and those blue china berries. The most exciting fall visitor there so far was a Henslow's Sparrow that proved incredibly cooperative for some of the local birding guys. The sparrow had been hanging out in the same bush every morning for about a week, so we got to the area and waited -- after about twenty minutes, he appeared! I got a great look at his golden highlights, fine streaking, and kinda neck-less compact shape; just as I lowered the bins and pulled up the camera, a Song Sparrow flew by him and provoked his natural territorial instincts. Translation: he flew after the Songy and never came back. No photo. Still, we got to see him! Within a few days, he was headed for southerly climes so I'm glad I saw him. Highlights for this trip included Palm Warbler, Blue-headed Vireo, and lots of White-throated and White-crowned Sparrows.

2. PSU Arboretum: this was another area I didn't even know existed, right in the middle of town. The ornithology students do a lot of bird-banding here, and we decided to hit the area in search of several new warblers; we were not disappointed! And this time, we got PHOTOS!
We saw Nashville Warblers, easily ID'd by their prominent white eyerings and the white underparts area right where their legs meet their body (surrounded by yellow): 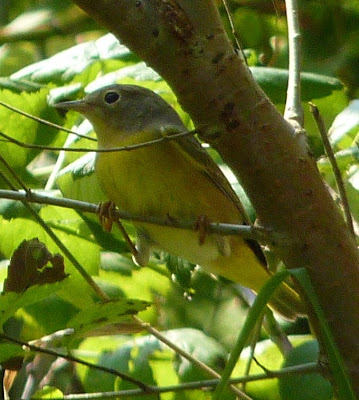 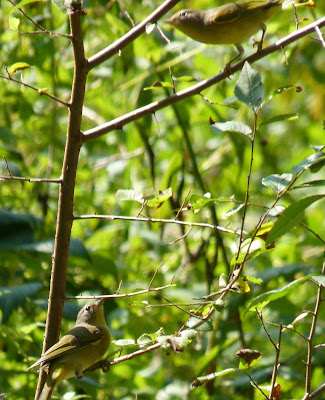 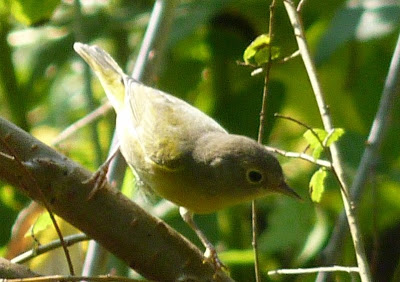 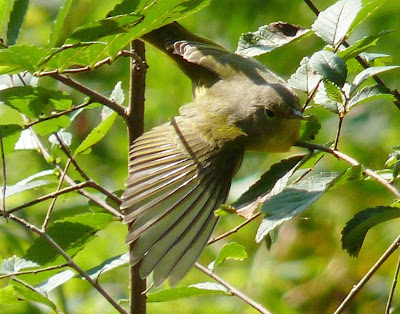 Lifer! (At least one of these photos was taken by Gretchen, by the way.)

I also got terribly blurry but definitive photos of a Wilson's Warbler wearing his little black cap: 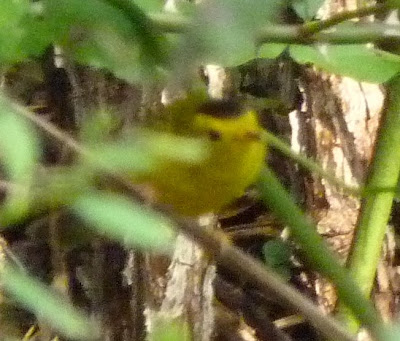 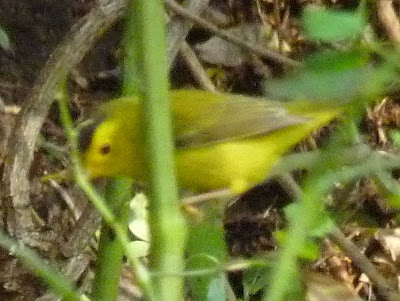 What a cutie! And a lifer!

Finally, we saw a Mourning Warbler - and here's the update - but we didn't get photos. I'm sitting here with Baby G, and she says that although we saw the bird, we did NOT get a photo. I think I was trying to make these other photos into Mournings, but they're not. This is apparently a Nashville: 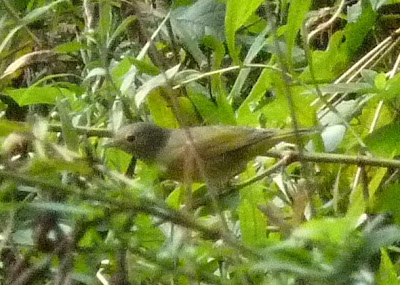 and this is apparently still a Nashville -- also the same bird as the first photo. Thanks, Drew and Alex, and thanks Baby G for the memories! 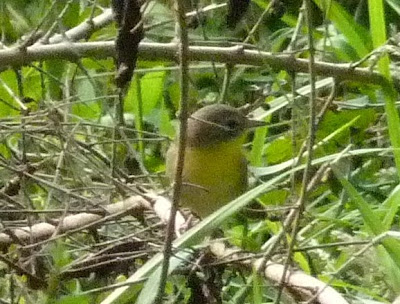 Still, Mourning was the third new warbler of the morning; sadly, I didn't get a photo of the Swainson's Thrush OR the Mourning, but you can't have everything.

Here's another photo with a bit of a mystery: 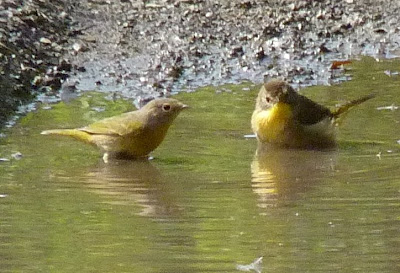 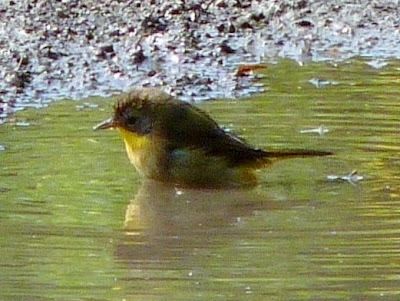 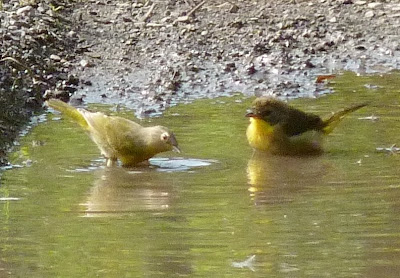 That looks like a Nashville Warbler on the left (that eyering is ridiculous!), but who's on the right? The bird's breast is so yellow, too yellow for a phoebe I think. But what is it? No wingbars, small warbler or flycatcher size. Help? UPDATE! Local birder (and one of my birding heroes) Drew of The Nemesis Bird checks in with the ID in the comments -- Common Yellowthroat! Thanks, Drew!

That little puddle also provided a tubby for this young male cardinal: 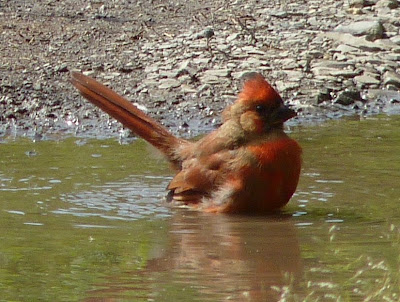 Other highlights for this spot included a Sharp-shinned Hawk that kept hanging around getting mobbed by American Crows, a Hermit Thrush, and a bunch of other warblers: Magnolia, Canada, Black-throated Blue, Common Yellowthroat, and American Redstart. This is a great spot, especially given the fact that the arboretum is like three blocks from one of the main streets through town.

3. Our Little Squat (not quite a Big Sit) in the backyard -- action was kinda slow, but we did get a new yardbird: a Belted Kingfisher! Our tally for the few hours we sat outside was only 20 species, but the kingfisher was a nice addition to the yardlist, now a whopping 49 species including three kinds of warbler, seven kinds of sparrow, Willow Flycatcher, Whip-poor-will, and Eastern Meadowlark.

Whew! A whirlwind of warblers and a blizzard of birds. My lifelist has jumped to 316!

I'll finish up with some cute: 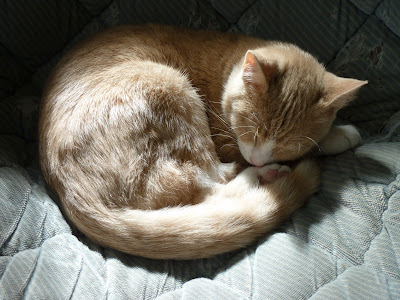 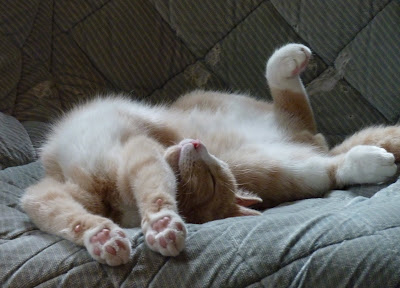 Cornelius is growing up soooooo fast! Here he is in a rare quiet period; most of the time, he's tearing around the house, chasing the other cats and Niblet, and jumping on them. It seems to be his favorite method of greeting, closing, and everything in between. Here's a sample: