Saturday's birding -- not much action

After work today, I went to Scotia Barrens IBA in search of some late-to-rise warblers. Sadly, I found/heard none, but I did get mobbed by Purple Finches (one of my former nemeses!) and Blue-gray Gnatcatchers. I even managed to get photos: 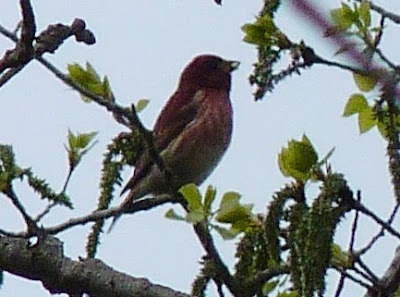 This male Purple Finch was surrounded by about 9 females. What a male:female ratio that guy's enjoying! 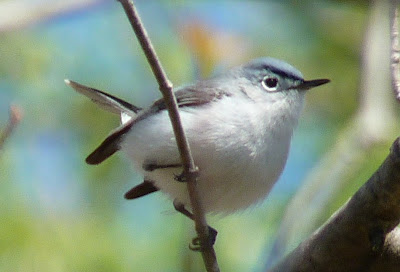 These were EVERYWHERE. Now that I recognize their little squeaky noises, I see them all the time! But a decent addition to my lifebirds photo file.

Here's another common bird that had somehow eluded my lens: 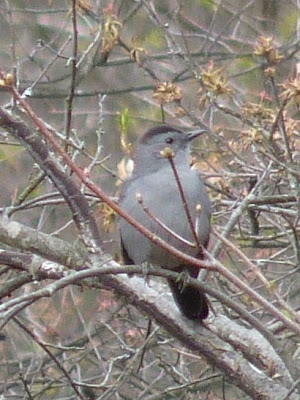 There were Gray Catbirds like this one everywhere this morning too.

Highlights included hearing a Wild Turkey gobble way in the distance and a Ruffed Grouse drumming. However, soon after I'd heard the drumming a couple of times, I heard a really loud gunshot. I didn't hear the drumming again. I'm hoping that's just a coincidence.

Also had a low flyover by this fisherman: 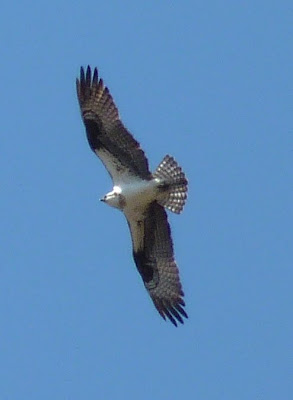 That might be the best photo I have of an Osprey. Sweet!

I also got another life-flower: Trailing Arbutus, a plant that is getting more and more rare in PA according to my Guide to Common Pennsylvania Wildlowers (Carol A. Sanderson). Here's the flower: 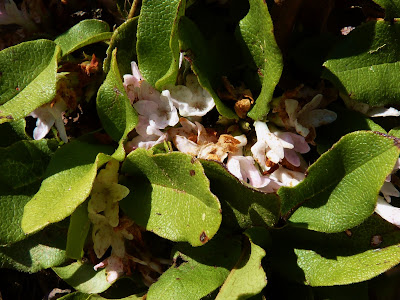 Another one that I THINK is Plantain-leaved Pussytoe but I'm not sure: 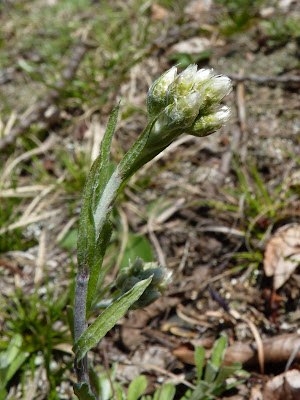 I haven't even talked much about my ever-growing yard list of birds, which AB is helping with. She's getting really good at IDing new birds at the feeders! Today I had two singing Yellow Warblers; I had a Yellow-rumped Warbler a few days ago. I also had a Purple Finch -- none of these birds came to the feeder; they remained in the trees at the back of the yard by the stream. Still, yard-birds!

Speaking of feeders, I made some nyjer finch feeders myself today! 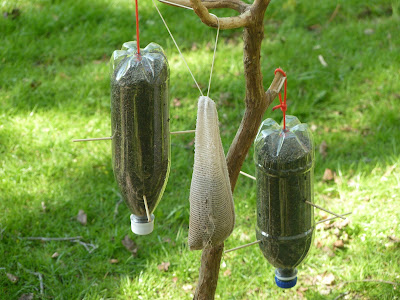 I had looked at our local birdseed store, Wiscoy, but theirs were really expensive, and the ones at Lowe's were kinda crappy. So it occurred to me, while looking at my many water bottles bouncing around the floorboard on the passenger side of my car, that I could make a feeder! So far, the American Goldfinches are NOT amused. They kept swooping in and hitting the brakes HARD when they saw that something was just not right! I know birds don't deal well with change, so I'm trying to be patient. I did see one brave little guy on the feeder early in the evening, and I think he was getting some seed out of it. I'm pretty sure the holes are big enough, but perhaps they're not? Or perhaps I'm just being impatient and they just need to get used to the new look.
Posted by dguzman at 8:26 PM 2 comments:

AB and I took a walk on Sunday and had some great sightings, including a lot of nest-building.

The first bird we saw wasn't a bird at all, however: 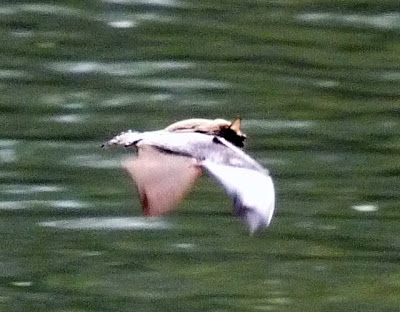 This guy was hawking for insects for the entire five or so minutes we watched him, despite the daylight. That's the second time we've seen a bat flying in the daytime over a creek; I guess they do that?

Here's one of the first nests we saw: 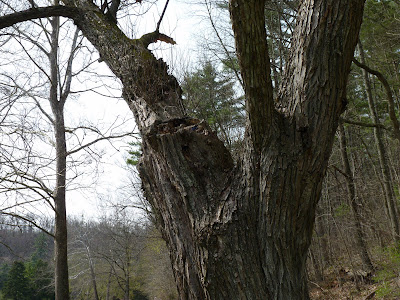 Don't see it? How about now: 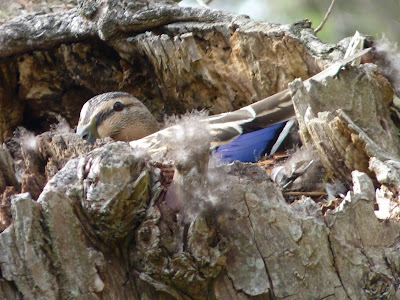 That's a Mallard nesting in a tree! Not very common, but I guess it does happen sometimes. I'd hate to be a nestling in that family taking my first step out of the nest! It's a doozy!

There were little bits of nesting material scattered around the tree: 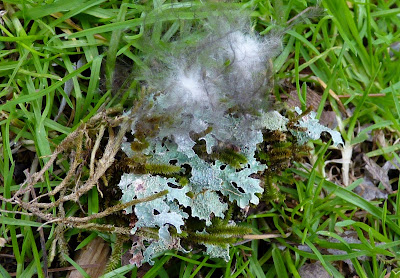 and it looked like at least one egg was deemed not up to snuff: 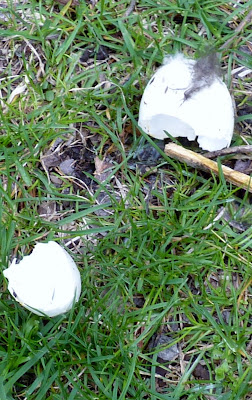 I thought it might've fallen out, but the cavity looked pretty secure.

We also found this guy sleepin' it off in the creek: 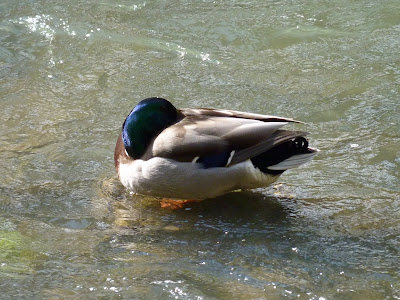 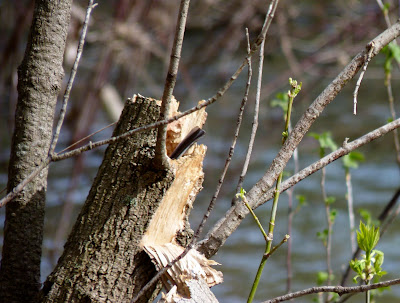 That's a Black-capped Chickadee digging out a good home, but I didn't manage to capture Mrs. (or Mr.? who digs?) BCCH standing nearby inspecting the work and tapping her foot impatiently.

We also saw a bunch of a Yellow-rumped Warblers who refused to sit still and be photographed, but mixed into that flock I found this: 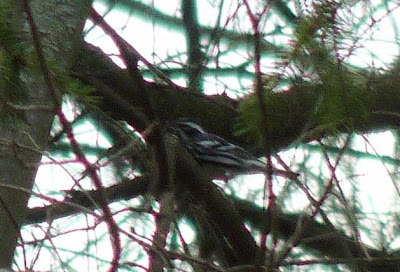 I had a life-flower for the day as well: 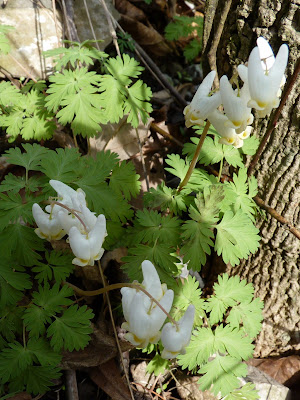 Dutchman's Breeches! Finally! I had thought the flowers would be bigger but they're quite small. Another beauty: Purple Trilliums, which were really taking that "nodding" thing to the extreme: 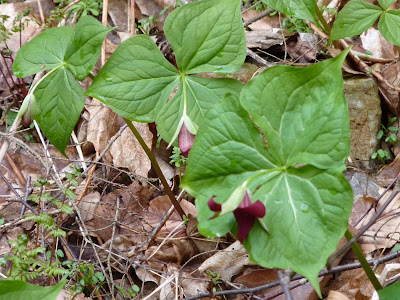 Must've been an "end-of-day-I'm-tired" thing; I'd never seen one drooping like that. 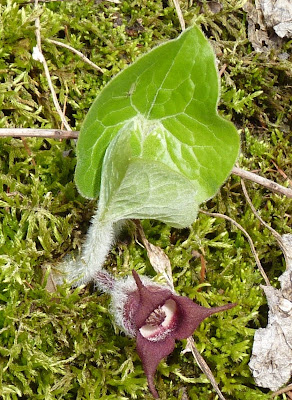 Finally, I was able to ID this scary-looking tree from hell using my new National Audubon Society Field Guide to Trees: 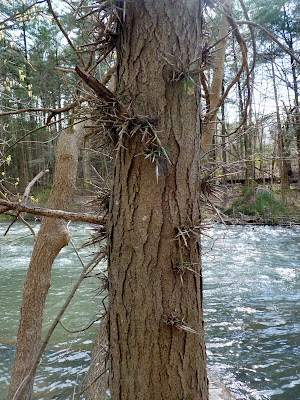 Nothing sweet about that tree, man.
Posted by dguzman at 9:20 AM 5 comments:

Probably the biggest mysteries for me are shorebirds, despite all my attempts to learn them. After Mary and I left the SPI Bird and Nature Center, we went a bit further up the island right next to the Convention Center, where there are some hard sandflats where people fly kites, ride those sail-board-wheel thingies (???), and (apparently) drink and toss beer bottles onto the ground. We'd seen a huge flock of shorebirds and gulls and terns there when we were at the nature center, so we thought we'd get a closer look.

Here's an idea of how many birds there were--click for bigger: 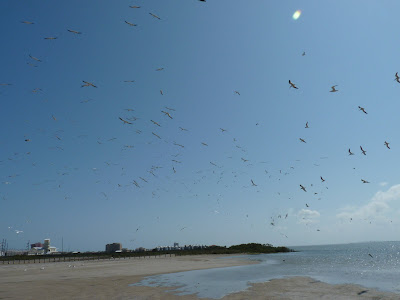 I got a little too close and they all wheeled into the sky. That's the nature center in the background. Anyway, they settled back down and I got great shots of TONS of birds in addition to the various terns and gulls I showed you earlier. Here are some more mysteries: 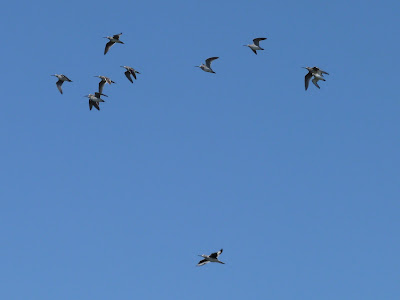 These kinda look like snipe to me -- but there are some different birds in there too. Note the white leading edges of the wings on some of them. The one at the bottom is definitely different from the others, as is the one farthest to the right underneath that larger one. All the rest are, I think, the same kind of bird. Note also the white eyestripe on the many birds. 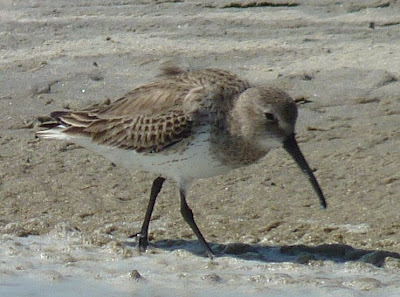 Some kind of sandpiper?

From left to right, a plover of some sort? a dowitcher (with long bill)? a something laying down? a young Sanderling not yet in full breeding plumage? (the whitish one) I give up. 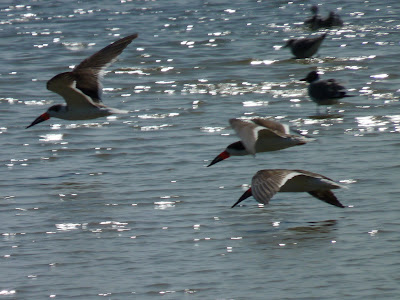 Here's what I think is a Sanderling not yet in his breeding plumage: 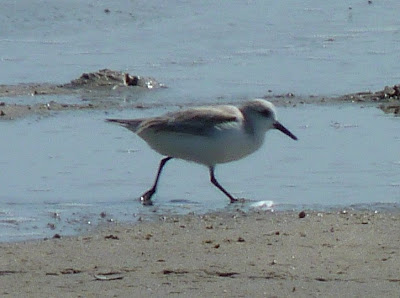 and here's a close-up of a similar plover to the one above in the group photo: 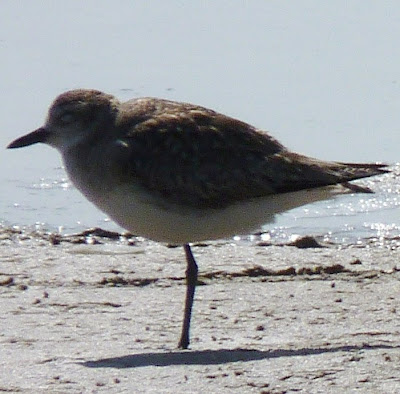 no clue. I know from the bill that it's a plover -- the common one down there is Black-bellied, but shouldn't he have been (a)gone by early March OR (b)in breeding black plumage? Perhaps it's a female?

Any help with these mysteries would be appreciated. I also have a "sound" mystery, but unfortunately I didn't get a recording that came out. When we were at Laguna Atascosa after dark, we heard a "wheep!" sound -- the bird would say "wheep!" and then wait a second or two, then "wheep-ho!" I've listened to nightjars, goatsuckers, owls -- no clue what this bird was. Any suggestions? We never saw anything, but we heard him as dusk fell and into the dark of the night.

This is probably my last Texas post; it all seems so long ago now. I've been working like a dog lately, doing my door-to-door thing despite the almost constant rain and cold -- which can really get a body down. We had two beautiful days, yesterday and Thursday, but today we're back in the low 40s with a steady rain and biting wind.

I've done a little birding here and there, mostly while on my way to work. I passed a farmpond today in which I saw a pair of Buffleheads, a Pied-billed Grebe, and three Wilson's Snipe! That was pretty cool. Mostly, though, I've been working.

I'm also watching my tomato and pepper seedlings grow, waiting for warmer weather to come so I can start hardening them off in preparation for container gardening! I know better than to put anything outside before Memorial Day, so it'll be a while before I get any gardening updates. Right now, I'm working on some self-watering containers (from a book AB got me) and keeping my seedlings warm.
Posted by dguzman at 6:19 PM 6 comments: