For the first time ever, I visited Wisconsin and Minnesota. AB and I went to WI first, to visit her sister, brother-in-law, and their new baby! No pics on the interwebs allowed, but let me tell you -- she's a cutie!

We then drove to Minnesota for a wedding during a ridiculously severe heat wave. We sat under a tent and sweated for four hours; it was a happy occasion, but I think I sweated off about 10 lbs. (I'm sure it all came back.)

Once in Wisconsin, I had my eyes peeled for Sandhill Cranes; I'd seen that we'd be in their breeding range and that there were lots of reports of them in eBird. We hit two different spots listed as "hot spots" around Beloit, WI, but we didn't see any cranes. I was also hoping to see a Dickcissel to get a better photo for my lifebird photo file, but again -- nothing.

On the road between WI and MN, however, we struck gold:

Terrible photos, and we only got them after having to drive a ways, exit, turn around, go back a few miles, and then hope they were still in the field. AB spotted these; I was busy waving at cows. AB's patience rocks.

A few days later, on the way home, we saw these cranes in Ohio; after another 30-minute turnaround, I was able to get a decent photo: 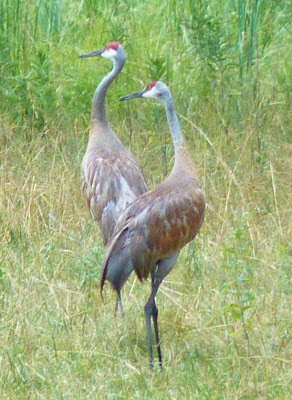 While we were in Beloit, I heard the constant twittering and buzzing of dozens of House Wrens: 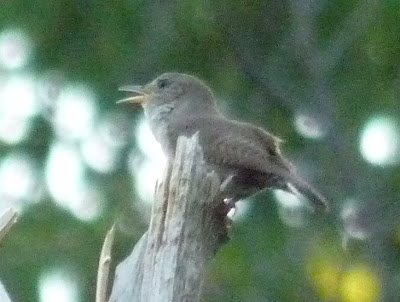 I'd never seen or heard so many in one spot! They were like HOSPs in this neighborhood--everywhere.
Posted by dguzman at 10:57 PM 5 comments:

Update on the babies

Despite his pouting and not wanting to be photographed, I managed to get some pictures of Niblet eating some baby carrots and greens we got for him from the garden: 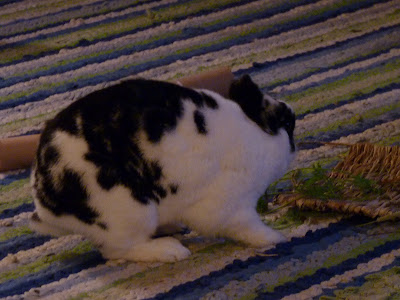 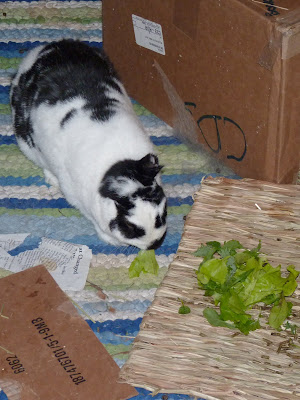 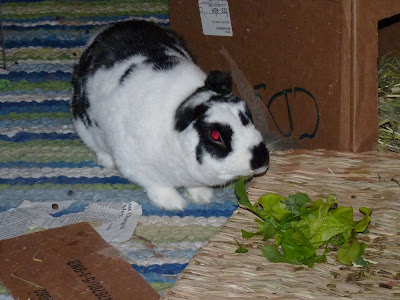 Little Cornelius will be going to the doctor this week, to make sure he's healthy and FIV-negative and such. 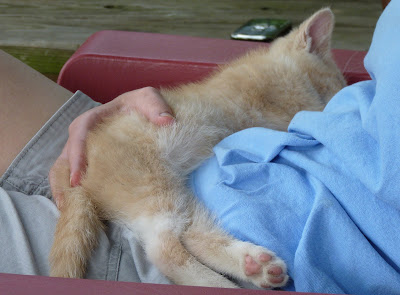 He'll be moving into the house after that! Fingers are crossed that he gets along with Maya and Owen, and that he's disease-free.
Posted by dguzman at 9:31 PM 4 comments:

I may have mentioned that I've been gardening, mostly in containers, for a couple months. I started everything from seed back in March (I think--I can't believe I didn't write down the date. Grrrrr.)
Here's what I started out with once I'd transplanted/planted in the containers--photos taken back in early June: 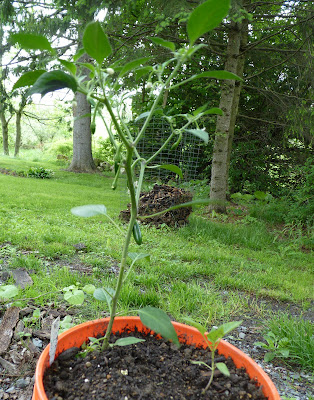 a young Serrano pepper plant(left) and a 'Purple Bell' pepper (right); the Serrano
is the only thing in the container garden that I didn't grow from seed 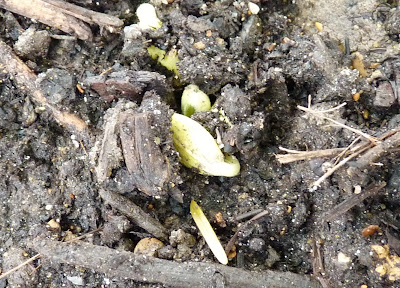 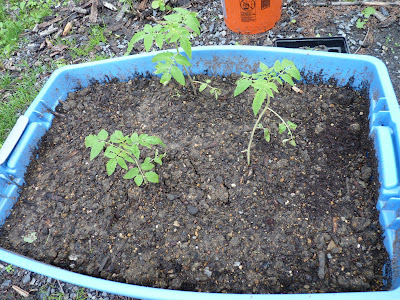 Chadwick cherry tomatoes on their first day outside 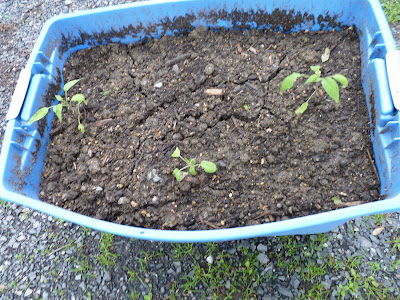 Brandywine tomatoes on their first day outside 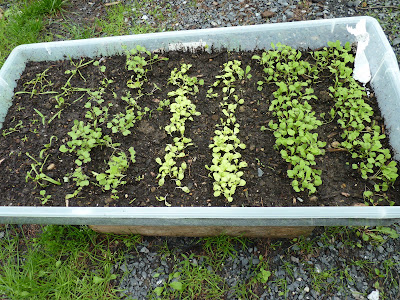 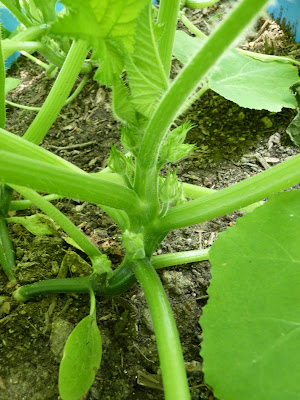 soon to be baby yellow squash! 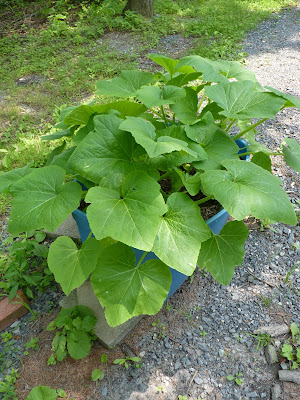 all the yellow squash 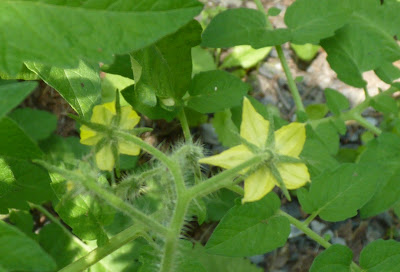 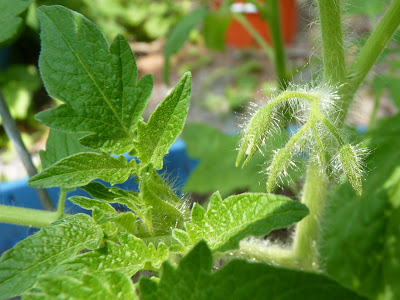 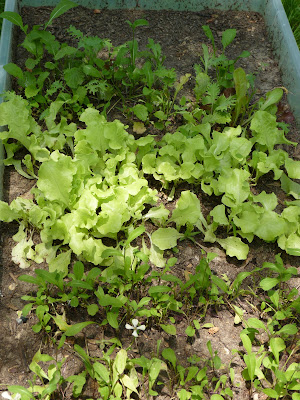 the somewhat eaten greens -- arugula up front (flowering!), green lettuce,
then mesclun, and then a blank space where the spinach just never happened 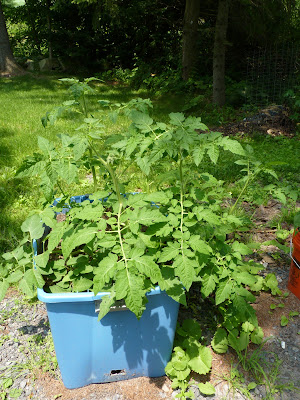 the cherry tomatoes, out of control! 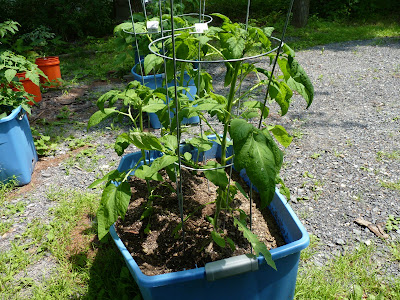 Brandywines in cages -- but believe me, they're wild 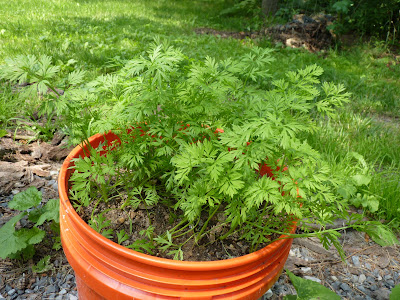 carrots! (I didn't bother to show the dirt in the "before" section) 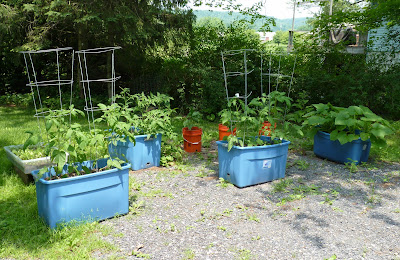 the entire container garden
All the plants in my container garden were grown from organic heirloom seeds by Seeds of Change (except for the serrano, which I couldn't find seed for).

I also have a small garden in the yard: 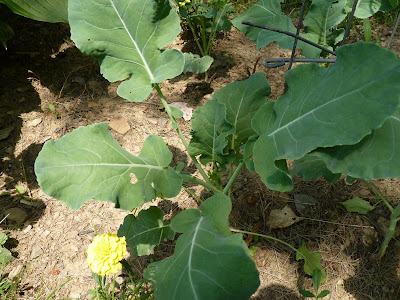 broccoli from a local nursery 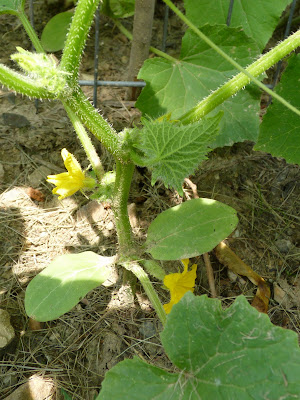 Burpee's 'Straight Eight' cucumbers from a local nursery
We should be eating cherry tomatoes in maybe two weeks? and squash in about the same time. Everything else is on its own little secret schedule.

Speaking of little, here's a little surprise we received a couple weeks ago: 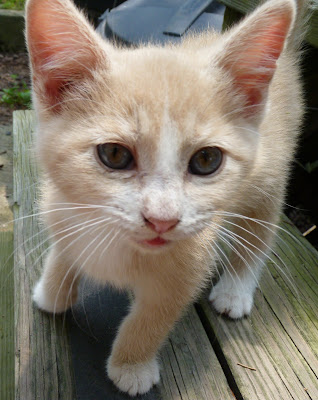 It's little Cornelius, son of a feral cat who wanders this way now and again (at least we think it's her, as she was around on the first day we saw him). He's no dummy: he first appeared, meowing his little heart out, on a Thursday; he hung around all day, hoping to catch our attention. That night, he turned on the charm, getting us to pet him and talk to him--and feed him a little. That's when we saw the alleged mother cat, pretty much watching us feed him and taking off, like she was thinking, "That's it, kid. Hit up the suckers for food like I taught ya. You're on your own now!"

Then the next day, there was ANOTHER kitten! Cornelius brought us his little runty brother Muffin. So for a few days we had them both outside, with Cornelius begging to be let in and Muffin just being very shy, but both of them eating and being cute as buttons. 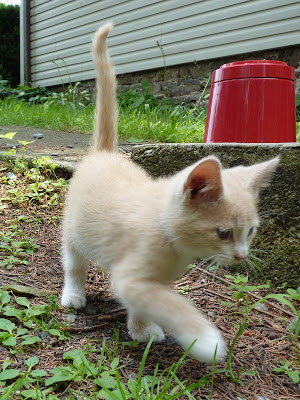 Cornelius on the go!
So that went on for a few days; then, just when we'd decided to bring them both onto our covered three-season porch (like a balcony), Muffin disappeared. He hasn't been back; I think Cornelius bumped him off or gave him the slip, knowing we could at least consider adopting one kitten but not two! I do hope Muffin found a good home, instead of being eaten or something.

So now Cornelius is staying on the three-season porch, using his litter box, and being a general cuddle bug. He's such a loving little guy; he demands non-stop love and affection! We vacillate between trying to find him a home and considering whether Maya and Owen will like him. I know Niblet will like him because I'm guessing Cornelius will chase Nib around, which he can't get Maya and Owen to do. (My old kitties -- scroll down a little into the post for the kitty parts -- used to play like that with him all the time.) We'll probably take him to the vet and have him checked out; we won't make a decision until after that. He's just so sweet! 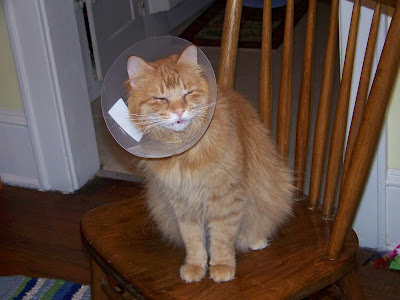 Oh, and one more kitty note: Maya went to a new vet today and is now receiving a new treatment for her "allergies" which may not be allergies at all but an auto-immune disorder and/or underlying bacterial problem. She was given an injection, some antibiotics, and some topical cream, and she's already scratching less! Perhaps the cone of shame will be coming off soon!
Posted by dguzman at 10:52 PM 5 comments: