NOTE: I'm updating this post after some information re IDs from my brilliant commenters.
Saturday was a long day at two wonderful facilities: the South Padre Island Birding and Nature Center and Estero Llano Grande State Park in Weslaco. In order to include more pictures, I'm going to split it up into separate posts for each place. We'll start off with a visual tour of SPIBNC. 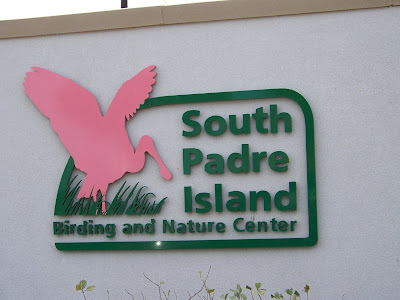 This fairly new facility is located 3.5 miles north of the Queen Isabella Bridge, right off the main drag on the island. The boardwalk stretches over the mudflats of the Laguna Madre (the bay between the barrier island that is South Padre and the continental U.S.), and they have everything from birds to alligators to coyotes out there. We arrived around 8:30 at low tide, so the mudflats were exposed: 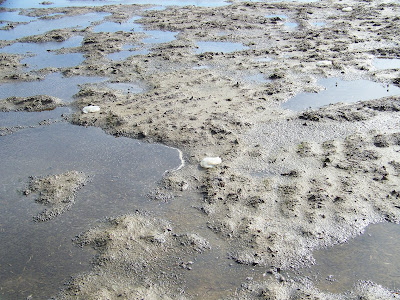 Also exposed were these huge jellyfish who'd been trapped by the retreating tide. I don't know if they live or die while waiting for the water to come back in.

You know it's going to be a good day when the first bird you see is a lifer: 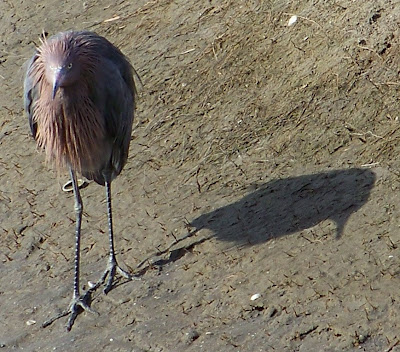 This beautiful Reddish Egret wasn't even fussed that people were staring at him; he just strutted around like he owned the place.

The wind was blowing at probably 30 or 40 miles an hour, which is pretty normal for the beach (and South Texas, actually). That made a morning in the mid-40s into a wind-chilled experience, but we were hardcore and stayed out there with our guide, Tim Bradshaw, a thoroughly good egg. He showed us what there was to see on this windy morning: 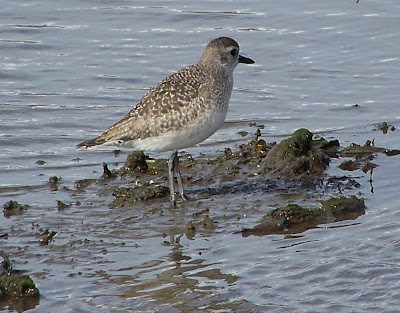 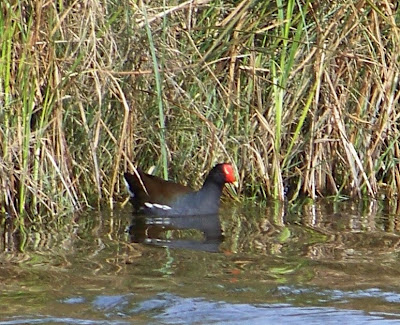 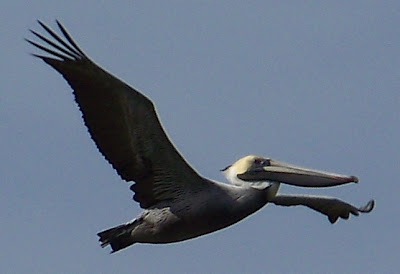 Brown Pelican flying about twenty feet over our heads 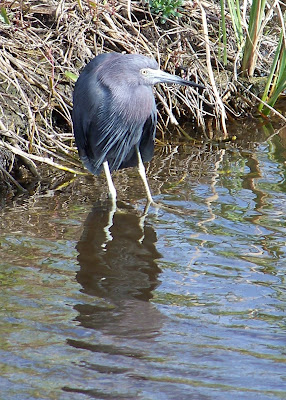 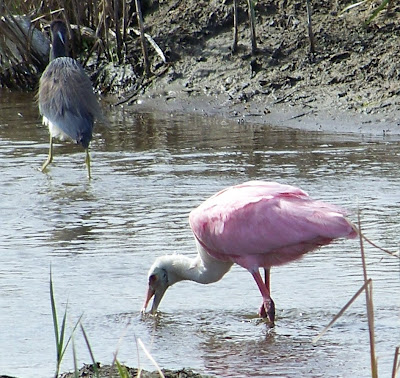 a Tricolored Heron and his pal the Roseate Spoonbill 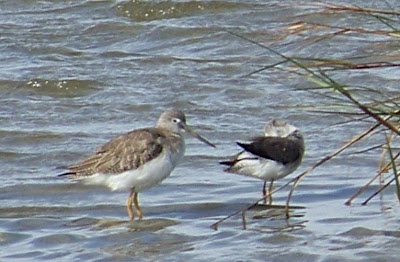 a side-by-side comparison of Greater and Lesser Yellowlegs 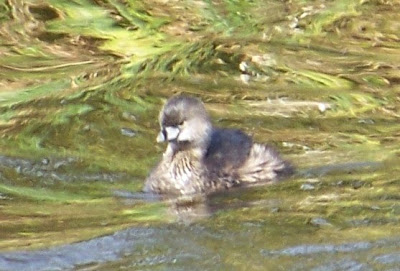 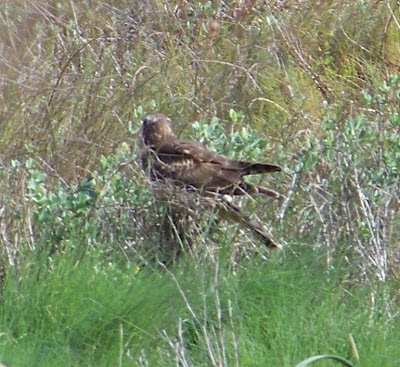 this Northern Harrier was our constant companion, flying over the area the entire time we were there and then landing for a few seconds on this native grass stem (which I figured would collapse under his weight, but it didn't) 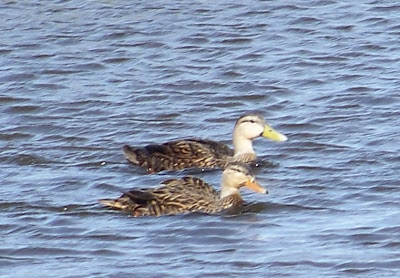 Tim said these were Mottled Ducks; I would've passed them off as lady Mallards myself. Speaking of Mallards, there was a hybrid Mallard that Tim pointed out who was much bigger than a normal Mallard and who was missing that white ring separating the green of his head from his chestnut-colored breast. I didn't get a picture, though, dangit! No telling what this big guy's mom/dad cross-bred with; a goose? 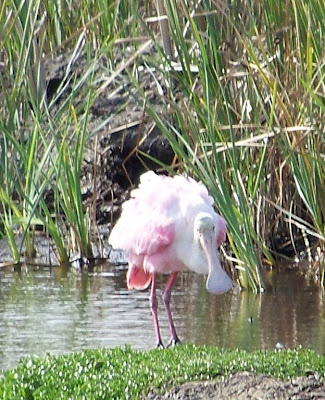 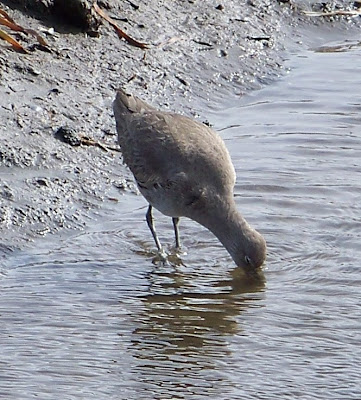 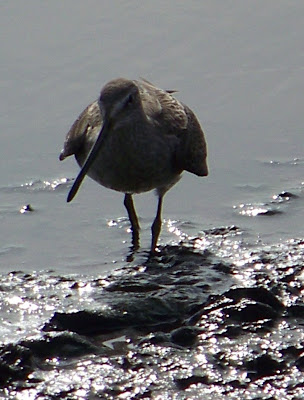 This isn't a Dunlin, say Laura and John; it's a dowitcher. Now--Long-billed or Short-billed?
I suppose my uncertainty stemmed from the awfully long bill on this guy. However, bill length isn't a reliable indicator of which dowitcher we have, according to Roger Tory Peterson! (Huh?) He states in his Field Guide to the Birds of Texas and Surrounding States (1988), "Bill measurements of the two overlap, but extreme long-billed birds of this species are easily recognized...." That white eyebrow is also distinctive. 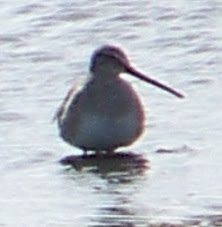 I'd say this guy's bill is pretty long; Peterson states that a 3-inch bill qualifies as a Long-billed's bill, so I'm going with Long-billed Dowitcher here. Further, RTP states that the breasts of the Short-billed are more spotted than the more solid-colored or barred Long-billed's. This fellow's breast looks more like a solid darker area than spotty. What do you think?

This shorebird business is tough; Tim did give us a great tip about spotting Spotted Sandpipers: he said they always bob up and down when they walk. He said they're the only sandpiper that does that, though my field guide says that both the Spotted and the Common (which the Spotted in winter plumage resembles) "nod and teeter constantly." Of course, the Common Sandpiper is NOT common here at all! It's one of those Eurasian species that's seen only up in Bering Strait and places like the Pribiloffs.

Well, that was our rapid but rewarding trip to the South Padre Island Birding and Nature Center. We meant to go back there, but we just ran out of time. I already listed the birds we saw there -- UPDATE: though now I have to amend my list! Off comes the Dunlin and on goes the Long-billed Dowitcher in a shaky but educational ID process. One thing's for certain: I'm glad the Willet is so much huger than the other shorebirds. He was pretty easy! I also learned that "snipe" is a reference to that distinctive headshape that our boy up above has: that long bill extending from his head, almost like a Woodcock's head does. It's funny-looking but cute, in my opinion.

I wish we'd stayed longer, but the wind was howling and we decided to go inland for a while. Tomorrow, I'll show you birds from our trip to Estero Llano Grande State Park. For now... I dunno... the bill on that dunlin looks waaay too long.

Spoonbills are such spectacular birds when seen in person, aren't they?

What a great day that must have been! I'm glad you got to see a Reddish Egret; they're fun birds with a lot of personality. Looking forward to hearing about the rest of your trip.

Laura--I thought so too! Hence my confusion! and who should come to the rescue but...

JOHN!--thank you! I kept thinking that, based on bill length alone, Dunlin didn't seem right, but I couldn't think of anything else. Now I feel dumb. Still, thank you so much--I'll just check for Long-billed or Short-billed!

Felicia--it was incredible. I can't wait to go back!