It was a very nasty day out at Bald Eagle State Park; temps just above freezing, a wicked wind, and steady light rain. Gretchen and Laura and I drove out there about 1.5 hrs after I got a text from a bird clubber that there was a big flock of Common Goldeneyes along with lots of mergansers out there.

We were disappointed to find only smaller rafts of Common and Red-breasted Mergansers and no Goldeneyes. Some very blurry (click to embiggen) photos:

That tall one near the middle up top isn't a Goldeneye, right? Or is it? It seems to have the white cheek patch, but I don't remember seeing the patch through the scope--and I LOOKED.
More: 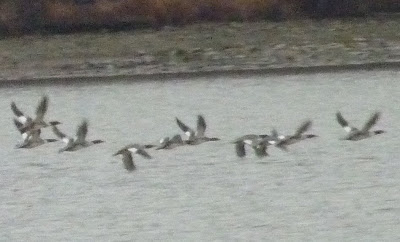 Here's where you can really see some good wing and neck markings.

Look at this bird sticking his neck up, on the right:

Almost goose-like, no? But
a merganser. So we saw 20 birds when I snapped these pics, but when I was looking in the scope a little after these guys flew and landed again, the numbers were lower and those are the ones I went with for my eBird count below.

There was also a large flock of at least 250 Canada Geese, and mixed into that flock was one odd goose with pink/orange legs and feet, a white ring around the base of his bill (which was not black but not orange either--orange-black?), some random white feathers on the back of his tall black neck, and whitish cheek patch (sort of dirty white) but definitely NOT a white chinstrap like the other Canadas. It was just a patch on either check, with black underneath. It looked somewhat like a Greater White-fronted Goose but somehow NOT. Here are the three best pics: 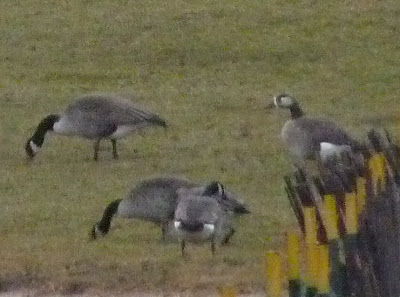 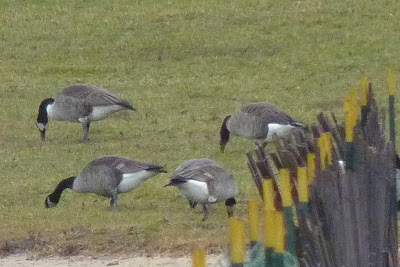 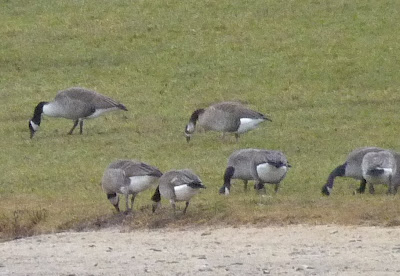 So you can see that his body is more Canada-like, but a little lighter and his tail and rump were DEFINITELY like a Greater White-fronted, with the shorter tail and white tip, rather than the wide bands of white and then black of a Canada's tail. I really think this was a cross between a Canada and a GWFG. Is that possible? At one point we saw them flying and that's when I noticed the distinctly non-Canada tail. None of my guides have any juvenile Canada illustrations, and this goose was the ONLY one in the entire flock with these weird markings. Is this a Greater White-fronted Goose, or a cross between a Canada and a GWFG, a weird-looking Canada, or what?

A local listserver said that it kinda looks like some of these Barnacle x White-fronted crosses. Maybe?

I was really hoping to see a Goldeneye; it would've been a lifer.
Posted by dguzman at 4:57 PM

Hi, dg! I love the picture at the top, very nice.

Canada Geese often hybridize with domestic geese like Greylags. We have a few of them in my area that initially caused me confusion. Here is one of my local ones. Here are some documented around Ithaca.

I'm not sure about the white-cheeked duck. It doesn't look like a goldeneye to me, but I'm not sure exactly what it is if not that.

John--I feel the same way. It doesn't seem like a merganser in the photo, but in real life it did. Maybe just a trick of light in the photo?