Back in February when I went to Texas, I went birding as often as I could courtesy of my sister Mary who was kind enough to take some days off work, drive an hour and a half from Austin, and wake up and drive me around at ungodly hours of the morning just to look for birds.

It seems, however, that I was not the only one who gained from our trips together. Mary is now beginning to bird too! She's gotten a new camera and some binoculars, and she's taking regular trips out to the many birding areas near her house. I couldn't be more proud when she calls me up to talk about where she went and what she saw. Even her boyfriend Jim is getting into it, calling her about a Red-headed Woodpecker who seems to be hammering out a cavity in one of Jim's oaks. Imagine: A RHWO as a yardbird! I told her to tell him I was jealous.

She's even sent me some pictures. She's still learning about the incredible difficulty of taking pictures of birds in the field, but she's trying hard. Here are a couple of pix of a mystery bird: 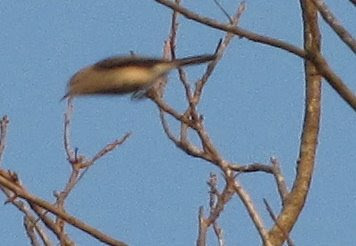 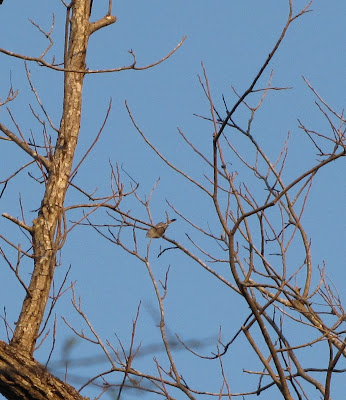 Any ideas? A wren of some sort? A big warbler? A vireo? Remember -- this is a Central Texas bird.

Some of her pics are really good ones though. Look at all these beautiful Northern Shovelers: (who are apparently Southern as well) 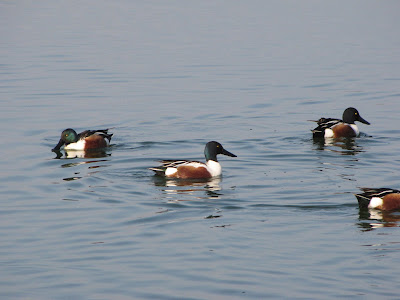 And here's a Carolina Chickadee: 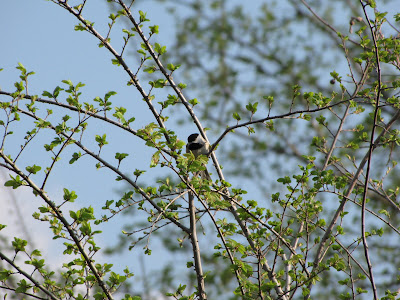 I had only seen Black-caps until I went down there.

And this one is for Lynne--I've never seen so many TUVUs roosting together in my whole life! 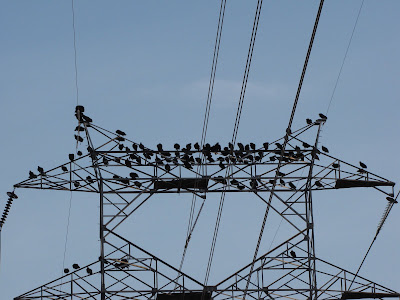 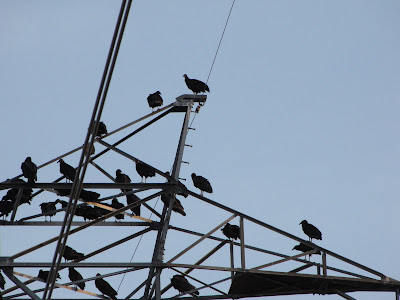 I can't tell whether they're all TUVUs or there are some BLVUs mixed in. But here's a little TUVU action: 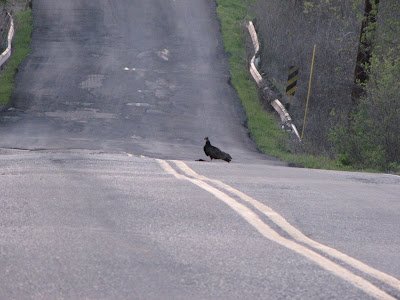 It's so neat to find out that my enthusiasm for birding, as well as the beauty of the birds themselves, has taken root in other people. Kat was never very interested in it at all, but someday I'm confident I'll find someone who loves birds or is at least willing to just open up and let them win her heart.

It's also fun to pass along some of the things I've learned since I first was beginning to bird and started this blog. My advice to Mary so far has pretty much been "practice practice practice" with the camera and concentrate on fieldcraft (learned from Mike McDowell), and try to skulk around and get as close as you can (learned from the amazing birdstalker herself Mary in North Carolina).

I'm proud of Mary, and of my bff Gretchen who'll be birding Cape May with me at the end of the month, for their willingness to try something that most people think is for dorks and/or old people.

All photos courtesy of Mary Guzman.

Whooo!! Those TV's look like a flock of starlings on the power lines! I've NEVER seen so many.
Thanks D.

That's really cool about your sister Mary's growing into a birder.

Old and dorky- that's me!

Hooray! You reeled one in!
Now you get a toaster oven!

Wow! That's so cool!!
It is amazing when other people catch the "birding virus"!!
Some guys from the office sent me pics of birds they saw on trips they took recently, so, I should prepare a post about the birding virus soon ;)
GREAT pics! Un beso para ti y otro para Mary :)
Mel

So nice that you have influenced a few people to become birders! I love stories like this.
Happy birding on Cape May..Hope you get many Lifers!
So happy your fur baby is doing well.

You sure that wasn't really the long lost carolina parakeet? Huh?

And all those vultures ... just really an April fool Photoshop, right?

OH .. NICE NEW BANNER PHOTO .. although that other one was nice too.

It's great that you're getting other people into birding!

I don't really know TX birds, so use my comments with caution. The photo labeled "DUNNO+2" looks like a gnatcatcher, presumably blue-gray. I don't see anything in "DUNNO+3" that would suggest otherwise.

Nice birds!I like seeing the shovelers-I've only seen a couple myself.Good job introducing others to birding.Te more people are interested in birds then the more they will be for protecting land.

I knew Lynne would be one of the first to comment--salivating, as she is, over the turkey vultures.