It happened! I got my 200th bird! And while it wasn't a Scarlet Tanager, or any of those crazy warblers, it was just as satisfying. Yesterday after work, I saw Matty for a while but he ended up cancelling on dinner so I went to TICK WORLD--the Scotia Barrens on the north edge of State College. I bought some Cutter's with 23% DEET and soaked myself in it, then I hit the trails. My best photo was of a Chestnut-sided Warbler who was driven nuts by my BirdJam: 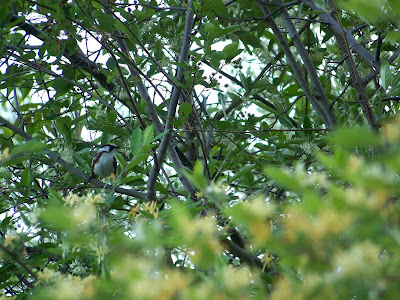 These guys were everywhere, singing "pleased-pleased-pleased-to-meetcha" at the tops of their little birdy lungs. It was often hard to hear anything else over their din! I wish I could've gotten better pictures of this bird, but it was getting dark quickly, and we were under the canopy of leaves. He flew all around me, so close to me that many times I could've reached out and touched him. The hum of bumblebees doing their bee jobs was constant, like the drone of distant airplanes. Imagine my horror when I noticed that many sections of the path looked like this: 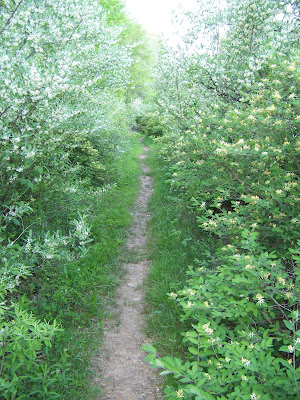 For a person who's allergic to bee and wasp stings, I was pretty freaked. I gutted it up, though, and walked through at a brisk but calm pace. These trees were incredibly fragrant, with a lilac-like smell. What are they? Here's a close-up: 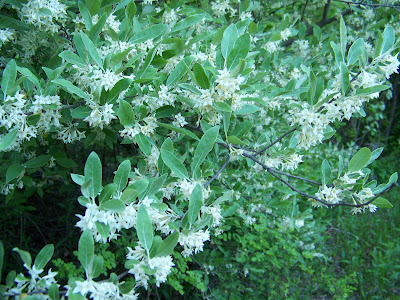 Probably something invasive. It was everywhere. After an hour or so on this trail, looking at Canada Goose babies 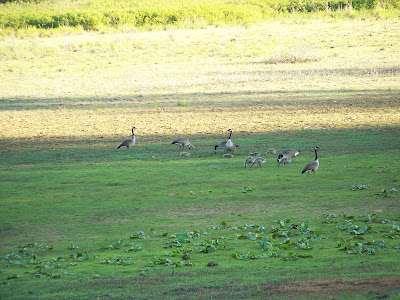 watching an Eastern Towhee high in a tree 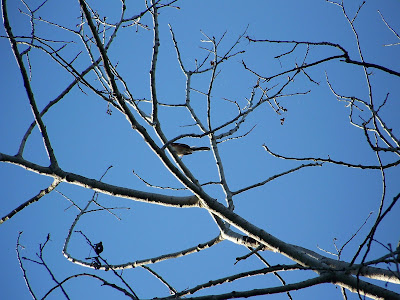 and watching all the Chestnut-sideds everywhere, I made my way toward an area that's supposed to be lousy with American Woodcocks and Whip-poor-wills. I was hoping to maybe get a photo of a woodcock, and I figured that Katdoc's comment about hwo you can count it if you just hear whips (because they're almost impossible to see in the dark) made it okay to count any whips I heard as my big #200.

By now I was deep into the barrens, and I was all alone. I made it to the spot--a nice big clearing where people sometimes shoot skeet--about 8:15, as I'd been advised. It wasn't looking (or sounding) good until about 8:30, however; that's when I heard it: above the constant trills of Wood Thrushes, the never-ending songs of American Robins, and the whiny mewing of Gray Catbirds, I heard the unmistakeable "PEENT!" of a woodcock! Sweet! I strained my old eyes trying to see them in the fading light, but I didn't see anything.

Long around 8:40, I began to hear "whip, whip-poor-WILL! whip, whip-poor-WILL!" over and over again--that was it! Number 200! The best part: when I finally left, after video-ing the darkness with the whips singing in the background, I saw several of them in my headlights as they sat on the dusty dirt road! If only I'd had the camera ready!

Also on the way back, I heard a loud peenting just off the road, so I stopped and pointed my lights over a little ridge. Here's what I saw:
WOODCOCK! I realize I probably broke the ethical rules of birding by shining my headlights your way, Mr. Woodcock, but I was just trying to see you! It was only for a second! Sorry! Leaving now!

And so I saw and heard my #200th lifebird, and I got some decent photos/video. Pretty damned cool.

Listening to Whip-poor-wills with a big goofy grin on my face:

Note--that Eastern Towhee was singing a weird version of "drink your tea" in which he would say "teeeee-terrrrrr-tweet-tweet-tweet-tweet-tweet" with the 5 tweets sung in rapid succession after the two drawn-out syllables in front. Weird.

I heard a lot of calls I didn't recognize--strange gruntings (frogs, maybe?), weird little dry rattles (not like a Belted Kingfisher though--very quiet), and so many other sounds I can't even remember. As many songs as I've learned, there are still soooooo many more I don't know yet. It's frustrating, but I still had a great time.

I think that was it. There were so many birds, but the trees are really leafing out now so it was hard to see them. It was so cool to have that Chestnut-sided so close to me; he was so tiny!

Maybe you should get a bee keeper suit! By the way, bumble bees don't sting.

Congrats anyway on #200. Maybe that's why I don't bird--too much pressure!

Whippoorwill is a really cool #200. Congratulations!

WTG Delia!!!!! and thanks for the cool videos so we could hear the whips and catch a glimpse of that woodcock.

You DO carry your ANA-Kit with you on your bird walks, don't you?

Yikes to the paths. It would have taken my phobic self a lot of nerve to make it through those. I'm glad you toughed it out.

Finally, I love the Eastern Towhee song. How funny that your guy was putting his own twist on it.

KGMom--I'm still scared of them. And the 200-mark wasn't about pressure; it was more like a personal goal.

Beth--thank you, and I'm so glad the videos worked!

NCMtnWoman--I don't have one of those kits. I know I should, though.

Lisa--Yeah, that towhee was jammin' or something.