Newest news of the Nibble

Niblet is doing well two days after his surgery. The cage confinement didn't last too long, however; I got home yesterday and found his greens (and the strawberry) untouched and some massive disapproval in evidence on Nib's face. I was worried--when a bunny won't eat, you know the end is near.

So I let him out and he back-feet-flipped me off and hid under the couch. I ended up moving his greens and stuff near the couch and he ate them right away. He even finally ate the pain-med-suffused strawberry, but not until sometime after 1 a.m. I still haven't seen him drinking anything, however, and that worries me.

This morning he was lively and did his usual morning ablutions (litty, nibble on hay, litty, nidge my head to wake me up, litty, litty, disapproving looks, litty). I chased him for some 20 minutes before finally giving up on dosing him directly; I squirted the pain med and antibiotics into some pellets, left him a big pile of greens, and said "All this better be gone when I get home from work!"

No response from under the couch.
I'll give him one thing: he's stubborn like his mama.

Last night, a friend came over and we went for a walk in the cold night air. We cruised through downtown Bellefonte (like New York, only ... NOT) and found some pretty scary window-shopping: 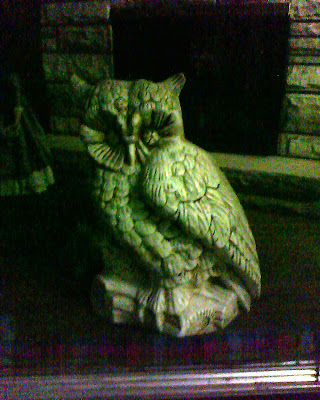 There were also some really creepy dolls, but it was too dark to capture their images. That, or the camera simply couldn't capture their spectral presences.

Once again, Niblet and I thank you so much for all your good wishes, and I'll keep you posted. At this point, I'm hoping that when we go to get his stitches removed on Thursday, Dr. Scholz will say that the infection hasn't worsened (no more pus has developed). She mentioned something about a draining mechanism to keep it all at bay, but honestly--I was a little in shock while she was talking about the future, so I'm not sure what the future holds. All I know is that we're taking it one day at time, one dosing at a time, and we're hoping for the best. I'm just not ready to lose my little love. (Will I ever be ready?) 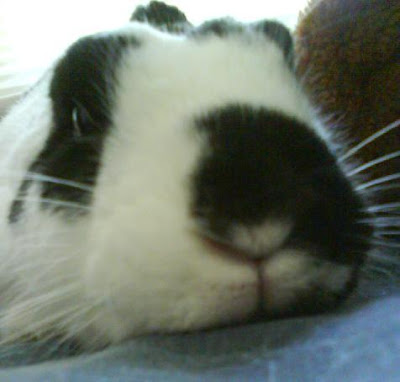 Going birding tomorrow morning, I think--I've been obsessively thumbing through my Eastern birds guide trying to figure out the best places to get these birds before I leave for the West. I'm wondering whether a trip to Cape May is possible, so that I can get some more terns and gulls and stuff. Maybe another mad-dash day trip, but without the getting lost parts? Laura, what do you think?

Meanwhile, I'll just have to content myself with local birding. And if it kills me, I'm gonna see an American woodcock, dangit, not just hear it!
Posted by dguzman at 11:04 AM

Best of luck to you Niblet!

Maybe now that Niblet realizes what the painkillers do, he'll be more eager to take his meds. :-) Good luck!

We're never ready to lose our friends, but sometimes it's clear when they are. Niblet sounds like a fighter and we're pulling for him!

When Art called from work today he asked if I'd heard anything about Niblet. Now I can update him that so far, so good. I've gotten that back-feet-flip-off from Buddy. They sure can make their feelings clear can't they!

We sure hope the little guy is better soon! I know that stress. Eat little boy - eat.

I want to know if Niblet ate his pellets laced with pain med and antibiotics, and the big pile of greens.

Come on "Niblet" eat! I am putting you on my prayer list. Thanks for the update. Can you wet the hay so he can get moisture? He'll need water more than food.

Here sending lots of love to you Nib-licious and to you.

However, seeing that you are after some woodcock this weekend has me a bit concerned for your lesbionic status... I'm mean - I'm not saying, I'm just saying.

I'm so out of it, I never got back to you with my vet info... guess it didn't matter anyway.

The best way to give meds to a bunny is to straddle them beneath your legs... trust me... lots of experience with that!

I hope Nibbles does well... don't be afraid to syringe water if he's not drinking enough on his own.

Sending warm thoughts to both you and Niblet.

All my best to Niblet and his loving caretaker.

Dr. Monkey--Nibble and I thank you. He said he feels your monkey love.

Bunnygirl--he's definitely a fighter. Thanks!

DKM--he's eating and drinking at his normal rates now. Whew!

Dr. Z--indeed he did. He turned his nose up at the pellets at first, but now he's used to the medicine smell and he eats them up almost immediately.

Bj--he's back to drinking, thank goodness. Thanks for your prayers!

Earl--thanks! When we move out there, you can meet him in person! (in bunny?)

Fran--LOL! You crack me up.

Laura--he just gets so upset when I pin him down Steve Irwin-style. So the pellets thing seems to work without upsetting him too much. I want to keep him calm so he doesn't start bleeding again. And I trust this new vet--she seems to know her stuff, and she gives him the loving care he needs.

Matty Boy--thank you from both of us.

Rabbits' Guy--it means a lot to know you and your buns are pulling for us.

I'm glad to hear Niblet is making progress. He's a rascal, that one!