Prayers and hopes are answered!

I went into the vet's office last night expecting the worst. It's kinda in my nature to be a pessimist; it's only when I'm outside among the birds and trees, or when I'm with my dear friends like The Flock or my Matty McMatterson, or when I think about our wonderful new president, that I'm upbeat and happy and hopeful.

And so it was with heavy heart that I walked with my little Son, Moon, and Stars™ in Ellen Scholz's All Creatures Veterinary Care Clinic. I knew we had an uphill battle, fighting an infection that had affected Niblet's skull, so I was prepared to hear bad news.

Boy, was I wrong.

Indeed, Dr. Scholz was surprised at how fast and how well Nibble's incision has been healing! She then cleaned out the fake-ear opening she made, pulling some hair and some scabby stuff out of the site. Then she flushed the wound: NO PUS! Niblet's beating the infection! Everything came out clear, and we're on the road to a full recovery!

I can't tell you how relieved I was to hear this; I became giddy, joking with the doctor about how strong my little man is, how he can poop more poops per hour than any other bunny known to man! How he can eat a carrot faster than a speeding bunny! How he can put a hole in my shirt lickety-split with one nibble! I was so happy.

So here's my sweet bun, back home from the vet's office, having a little treat because he was such a brave boy: 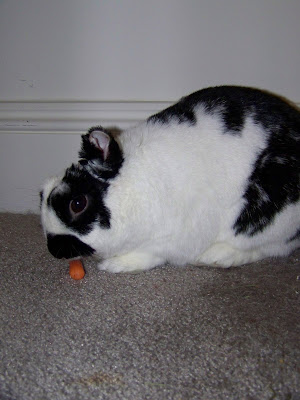 He didn't have to be put under anesthesia or anything for the stitch removal; they just held him and he was very brave about it, barely even flinching. That's my tough little guy!

This morning, I squirted his antibiotics onto his pellets and he ate them up like a good boy: 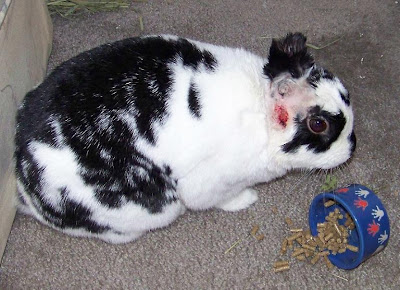 So you can see where he's bald still, the affected area from the surgery. And the little red spot is where he has his fake-ear opening. I asked Dr. Scholz about what the goal is, and she said we'll keep him on his Baytril for another week, plus there's this steroidal ointment I have to squirt into his fake-ear opening once a day for a while, and then we have to go back for another check-up in two weeks (and she'll file down his molars--more on this later). Ideally, everything will still be clean, and the hole will be there to release any kind of drainage from his inner ear etc., and then he'll be a normal little bunny! (or as normal as a cute-as-a-button earless bunny can be)

The molars thing: His front teeth are actually fine--he's been eating his hay and his fruit-wood sticks and stuff, and he's fine. But apparently, bunnies' molars don't meet flush and so where there's no meeting (and thus grinding down), the molars tend to get a little "peak" on them. This must be filed down from time to time. So that's what she'll do in two weeks.

The best thing is that I finally had a night where I didn't suffer from the reflux I've been having for the last two weeks or so. I'm weird with stress; my mind and my emotional well-being are rarely affected by stress. My body, on the other hand, shows stress like a badge of honor, with searing pain in my neck or shoulders, or the old standby gastro-esophageal reflux. That's always fun. I actually threw up the night before the appointment, it was so bad. But last night, happy and with Nibble munching his hay contentedly, I slept well and without too much pain.

We still have our check-up in a fortnight, but I'm confident that things will be fine. Niblet and I will take good care of his little fake-ear opening, and we'll watch Buffy on DVD, and we'll welcome the coming spring together while we listen to the Ella Fitzgerald CD that Lynne, that sweetie and lover of turkey vultures everywhere, sent us to show she was thinking of us: 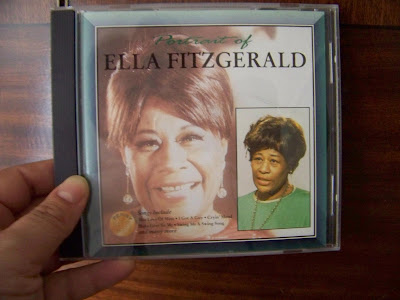 It even has one of our favorite songs, "It's Only a Paper Moon!" Once again, all is right with the world.

Well, except for the fact that we had snow flurries this morning....
Posted by dguzman at 9:40 AM

Yay, Niblet! I had a feeling it was going to be good news, since he was eating and pooping, acting like everything was normal. What a great little guy!

Is Niblet interested in being a rock star? I'm still taking pics for the Bunny Benefit Bash video, "Bunnies Rock!" I've been blogging about it for a couple weeks now, but this one is the most informative, if you haven't been keeping up: http://tri-bunny.blogspot.com/2009/03/bunny-benefit-bash-update.html

Yay! I'm happy for you both. Way to heal bunny buddy!

Hola Delia!
I'm sooo happy that everything turned out ok with Niblet!!
I've been thinking about you guys!
And yes, Lynne is an angel!
Besos,
Mel

Bunnygirl--Thank you for your good vibes! I'll check your blog out and see if I have any good pics.

Mel--Hola! Thank you for your good thoughts and besos.

Wonderful news. Hope you and Niblet have a great weekend!

Yay Nibs and Delia! Congrats on the good news! What a brave little bunny and his human.

This is really great news!

And look at my little Niblicous!!!

Even though I am half way across the country attending a meeting (bleccchhh)--here I am doing a bunny hop happy dance.

Oh, that's good news about Niblet, and glad you're feeling better too!

So happy to hear that Niblet is on the mend (and that you're feeling better too). Hip hop hurray!

Niblet .. you are an amazing bunn ... you get the tough guy and sweetie award all in one!

So glad Niblet is up to his old mischief.

Hooray, Niblet is one tough Spot! Now you de-stress, bunny nurse :~) you did a good job.

Fran--I knew you'd be happy to hear the news.

KGMom--hope you're not doing the dance during the meeting!

Bunns--thank you for your good bunny vibes!

MattyBoy--he's looking forward to meeting you too when we move!

I'm so glad he got through this (and glad you maintained your sanity).
Kisses to the Nibbles!
(And Lynne is the BEST!)

I'm very glad that Niblet is on the mend. My rabbit had to have an operation once to remove a benign tumor, and the doctor had to shave off a bunch of his hair so he had this huge irregular bald patch and a big scar with sutures stitched across it. We called him Frankenbunny!

Dr. Zaius--Niblet is also suffering from Frankenbunny issues.... I want his fur to grow back!

Calypso Spots and Orion send their very best get-well-soon wishes to their spotted comrade! They are impressed at his fortitude at the vet's.

I love it ! Very creative ! That's actually really cool Thanks.