Well, it was a long day of anxious waiting yesterday, to see what would happen when Dr. Scholz went in for her exploratory surgery on Niblet's non-ear. The results were not good. It seems the infection that brought about the abcess has been there lots longer than the abcess itself. It had completely eaten away Niblet's ear canal, and there were signs that his skull bone was infected as well.

I had two choices--1. put him down without letting him wake up from the anesthesia, and 2. go for an experimental treatment, in which Dr. S would construct a permanent opening by which we could access the infection and inner ear directly and thus treat the infection. Obviously, I couldn't just let him go--not without giving him a fighting chance. So we chose to fight.

I don't want to talk too much about the specifics of the operation except to say that I was there for the end of it and watched Dr. S sew him up. There was some bleeding from the bone, and that was worrisome, but it's stopped now. I took a photo of Niblet's half-shaved head, but it was still pretty bloody (she didn't want to wipe it too much for fear of starting the bleeding again) and I just didn't think you should see him that way.

Instead, you can look at him the normal way, eating some notes I took on a book about archeology: 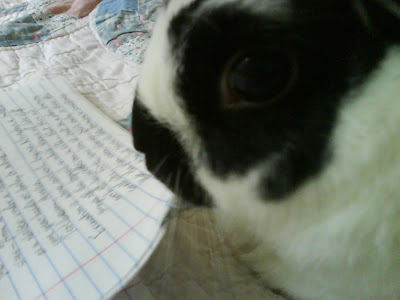 He's such a little imp!

He is very active and alert, and he wants to run around and be his happy little self. However, I have to keep him in his cage for at least a day or so while the bone stops bleeding for good. He needs to rest and relax and heal. He's not too happy about the cage, or the meds I have to squirt into his mouth, but I'm determined to take the best possible care of him.

Already he's started protesting in his little ways: his newest trick is to dig fiercely in his litty, kicking dirty Yesterday's News litter out of the cage and onto my bedroom carpet! He also won't take his meds the easy way--I was squirting them onto some pellets which he would then eat. Well, he seems to have wised up to this trick, and now he raises his nose at his pellets. Imagine! This bunny, who normally flips out for pellets like they're his crack or something, is now refusing to eat the pellets! Sheesh. I was a half-hour late to work this morning, chasing him around the apartment, under the couch, etc. I finally got the antibiotics down, but he squirmed away before I could give him the pain med. So I just poked the syringe into a strawberry and squirted it in there, and gave him the strawberry. I'm sure he'll eat it (I hope).

So wish us luck, pray, think good thoughts, light a candle--whatever you can do for my little Son, Moon, and Stars™. He's got to beat this bone infection. He's too full of life, as my dear FranSheIs said on the phone with me yesterday, to just go down without a fight. 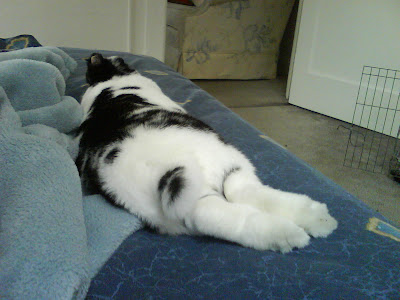 Oh my Niblet! We have been praying for you over here!!!

Take those meds - be a good bunny and get better soon.

Sending all our best wishes to friend Niblet!

Would he like to be a rock star? I'm gearing up for a bunny charity drive, and I'm asking for bunny pics for a video.

Besides, Niblet has the best 'tocks BAR NONE!
Fight on, little dude.

Hang in there, D.
HUGS


Our whole family is praying hard for you!

Hang in there Niblet - we are all sending you healing energy.

He's still on the prayer list at church. No one knows he is a rabbit, except for God and she doesn't mind at all.

Positive thoughts are sent your way!

Yup, all of us here at The House Of Rabbits are on the case too. What a hard choice ... I am glad it was not me having to make it.

For being so darn disapproving, finicky, and untrainable, the little guys sure can worm their way into a heart.

Fez and the Gang said...

Sounds like he's still got lots of spunk... We all send our thoughts to Niblet!!

Thank you all for your kind wishes and prayers--every bit helps!