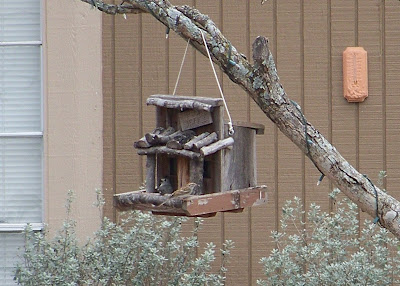 If this isn't a House Sparrow or a Field Sparrow next to that Black-crested Titmouse, that'll be another bird on my list! Any guesses? (It's probably just a house sparrow)

It was quite a week for me in San Antonio: I saw my family, much of whom I'd not seen in four years; I saw my parents' new home; I birded; I had good Mexican food; and I met a bloggy hero, Karen Zipdrive. I'm smiling as I type, just remembering all the good times.

I wish I could post a few more photos from my last morning of birding, but I left my USB transfer cable at my parents' house so I can't get the pics off my camera! Dangit! I'll include some other photos, though, and give you the birdy recap.

Kinda disappointing, but it IS rather early, even in Texas I think. We had great weather (in the 80s) every day except my first Saturday (60s and cloudy/rainy) and my last Saturday (50s with a serious windchill). Still, there were a lot of cardinals and mockers everywhere, but not a whole lot of other birds.

Not a bad haul, I guess--considering I had no idea where I was half the time. I'm sure there were other birds everywhere I went. I am certain I saw some sort of thrasher or thrush at one point, but I didn't see it long enough to get an ID. Also, I am almost certain I saw a Red-bellied Woodpecker; however, according to the SA Audubon Society's listing, it would've been rather a rarity. I only got a quick glance, but I'm pretty sure that it was a Red-bellied. I wanted to make it into a Ladder-backed, but I couldn't do that either; I just didn't get a good enough look.

Tomorrow, I'll be heading to the Lancaster PA area to visit Middle Creek, where there are up to 80,000 migrating Snow Geese at this time of the year! It snowed on Tuesday, however, so the birder I'm going with said it might be down to like 15,000 -- "only" 15,000. AS IF! My mind is already reeling at the thought of seeing that many birds (much less geese) at one time. I'll take pics, and I'll try to get a camera cord so you can see them. Can't wait!
Posted by dguzman at 10:10 AM

Wait, that's not a HOSP, is it? White-crowned?

I'm glad you had such a good time with your family. That's important stuff.

You had never seen a CAROLINA chickadee? What, you only get black-capped in PA?
Missed you on the Interwebs lately...girl, you seriously need privately-owned access.

We get those huge 10's of thousands of snow geese flocks here too. They are becoming a nuisance.

I hope you find your cable. I'll check my camera bag to make sure I didn't snake it accidentally but that would be weird. I'm going to try to go on a bird tour in a couple of weeks. the place is called Hornsby Bend and it's supposedly the 'hottest' bird spotting area around. go to http://www.hornsbybend.org/
some experienced bird guy gives a free tour the third Saturday of every month and you are guaranteed 50 different bird sitings. I wish you could go with me. miss you lots. love, your sister mary

Since hearing counts too, didn't we hear a scrub-jay at Friedrich Park? When I went there later the Saturday you departed, both Bronte and I heard him around the same area. Just trying to be accurate.-m

I'm not sure what kind of birds those are, but I love your bird feeder! I also love that shot of Alan Rickman on your side bar. I won't steal him from you, but can I listen to him recite poetry?

Yay, Chipping Sparrow! And then I can add a "heard" bird Western Scrub Jay too! As the list lengthens....

Glad you had a heart-warming, fun trip with your family. It helps to see some birds, too. Nice list!