Bookish thoughts: "In Search of the IBWO" 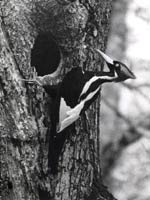 Arthur Allen took this photo, probably in the 1930s
Or however you would abbreviate "ivory-billed woodpecker."

I finished reading Jerome A. Jackson's In Search of the Ivory-Billed Woodpecker, and to be honest even I'm a little surprised at how much I liked it. I never really read many of the stories about the searches for the bird (though I don't know why), except for Birdchick's accounts of her participation in a Cornell-sponsored search (I can't find the link now--but it was back in 2005-2006, which is actually when I started reading her blog, and the rest of my birding and bird-blogging is history!).

If you like to read about birds or history, this book will satisfy both your cravings; my only problem was the incredible sadness and frustration that gripped me throughout. Greedy logging companies, chopping wood for everything from sewing machine cabinets to our WWII efforts, pretty much caused this bird's extinction (if it really is extinct). I realize that species go extinct every day thanks to humans, but learning so much about so magnificent a bird, only to be denied the chance to ever to see one--well, it was really sad for me.

Still, the book was filled not only with details about ivory-billeds but also the birding history of the United States. I found out some fun facts like these:

--in one of the quoted passages, Audubon called mating season "the love season" (tee hee)

--the largest woodpecker in the world is Mexico's Imperial Woodpecker, which shares a common ancestor with the IBWO

--there are only five sets of "probably authentic" IBWO eggs (kept in several museums). There are a little over 400 known IBWO specimens (stuffed) in existence today. Most were collected in Florida.

--Roger Tory Peterson had a stuffed IBWO specimen he got from someone; the specimen had been collected in 1881. RTP saw two female IBWOs on May 9, 1942; it would be the last time he'd see an IBWO.

--Arthur Allen, who founded the Cornell Lab of Ornithology, thrilled when he finally saw one, saying he'd found "that which they said could not be found." He started recording bird sounds with his grad students in 1929.

--James Tanner, who spent lots of time in the Singer Tract area of Louisiana (which is probably a mall by now) studying IBWOs, was the last to photograph one, and the only one to photograph one in color. He even has photos of young IBWOs on his arm and his shoulder. (I'm crying a little bit at this point)

--the last person to paint an IBWO from life was Donald Eckelberry, in April of 1944. When I went looking for an IBWO image for this post, I found this one by Julie Zickefoose, and I noticed she noted "not from life" there. It made me sad.

--fellow Flocker Julie Zickefoose helped Jerome Jackson (along with Christopher Cokinos) review some of the searches for IBWOs, "chronicling the difficulties and lure of the hunt for this bird" (here's the link to Cornell's site about IBWOs)

Some not-so-fun facts I learned:
--"Birds continued to be shot for collections long after it was realized that they were in danger of extinction." The "scientists" of the day didn't have a problem with collecting IBWO specimens for "scientific" purposes; they only begrudged the "commercial rather than scientific purposes."

--the author has searched far and wide in America and Cuba but, aside from possibly hearing some possible IBWO calls and finding some possibly promising habitat, he never saw one. He remains hopeful that there are some still alive, and he even recommends some good potential areas for future searches, but he warns, "Don't get your hopes up."

If you haven't read this book, read it. Read it and weep.
Posted by dguzman at 4:34 PM

I liked Jerry's book, too. You would love Jerry. He's such a neat, fun person, so full of life and curiosity. And the best thing is that he gives birds credit for being intelligent, individual beings, which is rare among ornithologists.

We have the Beletsky book of pictures and sounds and the Ivory Billed song is one recorded in 1935!

The fight goes on ... here it is the spotted owl and the marbled murrelet.

Jackson's book remains my favorite of the spate of Ivory-bill books, as well. But you should also read Phillip Hoose's "The Race To Save the Lord God Bird" -- it has a different style and some different information (and wonderful pics) and is a great read. The book is often targeted to young people (Hoose's usual audience), but should really be read by all adults interested in the subject.

Oh, dear. That does make me sad. I think I'll have to give it a read anyway.

And I'll have to give that key on quarter downy magnet a try today!

Julie--I bet I would like him; I liked his writing.

Rabbits' Guy--WOW, that recording is the one they still play in the field when searching for the birds. Wow.

Cyberthrush--Cool--thanks for the book tip. I'll look for it.

Earl--me too! This guy would know, right!?

just occurred to me (lest people be disappointed) that I should've mentioned that Hoose's book came out in 2004 and DOESN'T include all the hoopla since Cornell's 2005 Arkansas announcement (unless he appended future editions???), but even without that it is an excellent volume of Ivorybill history.

I remember taking a behind the scenes tour of the Ornithology Department at the Philadelphia Museum of Natural History observing all the stored bird skins. Seeing the IBWO was bittersweet. So sad that such a glorious bird is perhaps no longer.

Beth--yeah, I don't know if I could handle looking at the specimens. It just seems creepy to me, and sad that they used to "collect" by killing.