Despite our ridiculously low temps (in the teens and single digits), I've still managed to log a few birding adventures in the past week. Last Saturday, Laurie and I went to the duck pond near Centre Furnace Mansion, hoping to see two snow geese that--according to the local listserv--had been visiting the pond on a fairly regular basis for the last week or so. As I've never seen a snow goose, I was excited. Here's what we saw: 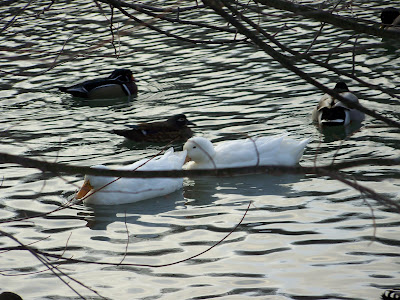 Um--those are ducks. Domestic, albeit perhaps not from someone's farm, ducks. Quacking along with the other ducks. Hmph. I know that the people who'd reported seeing the snow geese are good birders, so my guess is that Earl Cootie's Bird Goddess decided to play a little trick on me. She's like that.

She did grant me a couple of treats, however. If you look closely at that white duck photo, you'll see an interestingly shaped duck silhouette on the upper left.

It came a little closer: 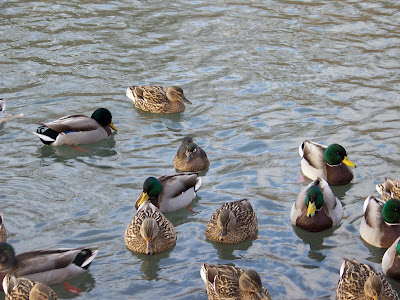 And then a little closer: 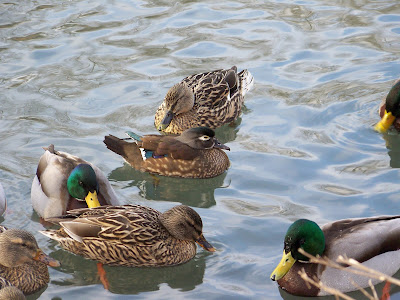 A WOOD DUCK! Granted, not exactly a breeding-plumaged male or anything, but still a wood duck! I always used to try to get photos of these guys back on the marsh, but I would spook them before I could get a decent shot. Yay me! I'm guessing this is a female, what with the white eye ring, but her plumage is still beautiful. Here's another shot: 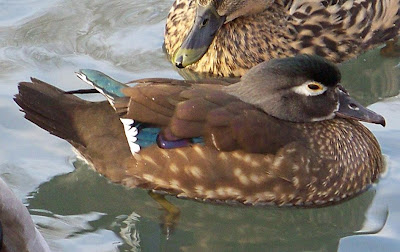 Isn't she beautiful? I didn't see her hubby anywhere; perhaps she was single and lookin'?

UPDATE!--my eagle-eyed commenters pointed out that I got both the drake and the hen wood ducks in that dark picture of the white ducks! here's a crop: 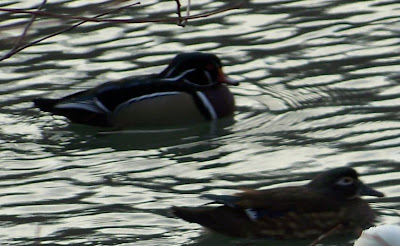 We then walked a little to try to see some ducks farther out on the pond: 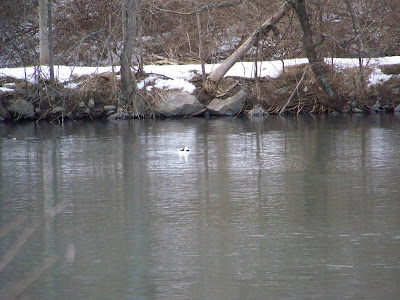 That's a bufflehead waaaay across there. I've only ever seen those when I took the ferry from Lewes to Cape May a few years ago. I tried to get a better shot, but I ended up falling on some ice. (If you're on Facebook, you'll know that I fell THREE TIMES last weekend. This was my first fall.) 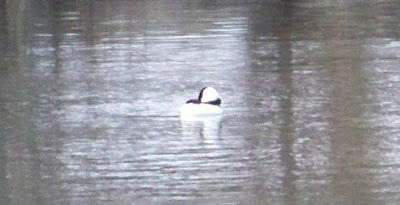 I really like birds with funky-shaped heads, like wood ducks and buffleheads and mergansers. Anyway--it was neat to see one of these again, especially right here in town.

And here's one of those crazy-ass Muscovy ducks, probably an escapee (perhaps from the same place as those white ducks) who's "gone native," as they say: 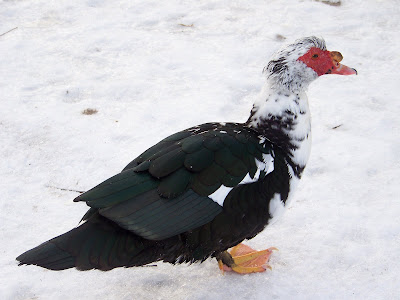 Check out the talons on those feet! I'd hate to have to scrap with this guy. His plumage was a beautiful emerald-black, though it's probably not visible here (it was getting late). And look at the bare patch of red skin, along with that big old wart thingie, on his face. Is that technically a wattle if it's on top of his bill? Oh--Peterson calls it a "knob."

I also saw a duck I'm a little unsure about: 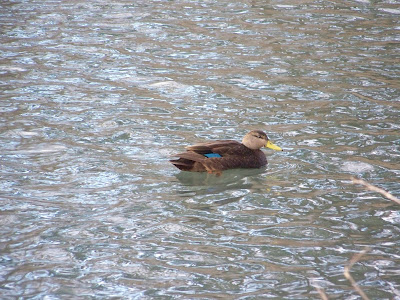 I know it's not a female mallard, as the bill is white/orange, it's darker and less streaky than they are, and the wingspot is a different color. Here's a comparison collage: 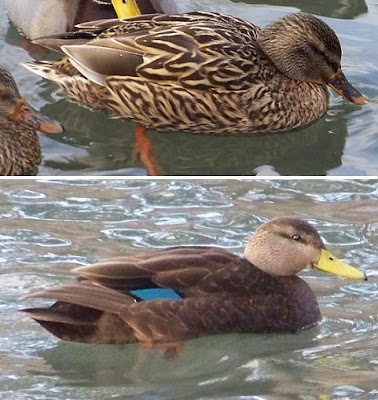 That is definitely not a female mallard. The bill reminds me of the wood duck's bill, but the head isn't right. I just checked my Peterson's and I think I'm gonna go with my initial guess, made pond-side: that's an American Black Duck, isn't it? Not a lifer, but it's my first photo of one!

That's enough of the duck pond. Here's a pic of a recent sunset: 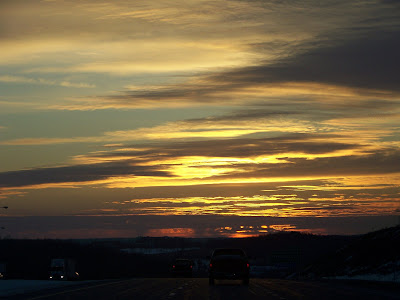 It may be freezing here, but we still get some nice sunsets.

(By the way, for those who are keeping score at home, I fell a second time at the bowling alley where I was working part-time for moving money, and then a third time on some stairs at my friend Joche's house--but I think I told you about that one. My concussed noggin is feeling better, though my shoulder is still very stiff and sore.)

My next birdy adventure happened yesterday. Despite the irruption of white-winged crossbills in the state, I've yet to see one, so when I saw a report of some crossbills right on the Penn State campus, I had to check it out! However, the Bird Goddess was in a bad mood again, and I didn't see anything but a few noisy crows. Oh well.

Today, I saw some reports of redheads out there yesterday, but Gretchen and I are leaving right after work for Pittsburgh, where we'll be visiting THE NATIONAL AVIARY! so I won't get to go out there and see them. I hope they're still around next week, as that would be another lifer for me.

When I get back to my computer on Monday, I hope to knock you all outta your seats with some kick-ass photos of all kinds of groovy birds from the Aviary. I know they don't count on my lifelist, but it's going to be such a thrill to see these birds live, not just on The Life of Birds or whatever. Gretchen and I are both so pumped to go, plus we'll be watching the last disk of The Life of Birds as well as Season 7 of Buffy the Vampire Slayer. (I've been shepherding Gretchen through all the seasons, and we're finally to Season 7.)

I know--how can my little noodle hold all this crazy-fun-time-ness!? I'll answer that question next week. Have a great weekend!
Posted by dguzman at 3:44 PM

Bummer on the snow geese, Delia, but you did get wood ducks which is always a plus in my book! You do know that your first picture has both a hen and drake wood duck? He was the first thing I noticed when I saw the photo. I'm not sure about your mystery duck. I'm thinking it's an American Black duck but not positive. Hopefully someone better at ducks can fill you in. Enjoy your trip!

I have the same luck as you have when it comes to bird sightings. I get all excited with anticipation and the bird I want to be there is nowhere to be seen.

Oh my Lord, stop falling down!!!
We need you to be healthy my girl.

I hope you have a great trip. I so loved these photos dear D.

While I will be no help on duck ID-ing, glad to see you are birding again. It's either get back to birding or change your blog name.
You--falling--three times?! You need suction cups on your feet!
Stay upright and well.

Hola Delia,
GREAT! You get to go birding even in the cold weather anyway! :)
I'm stuck in a grey office with sun outside, wishing for weekends to come fast!!
Have fun with the next birding adventures!!

I was going to say the same thing as Beth... you caught the male on "film"!

Yeah to what Beth and Patrick said - I saw the male Wood Duck in the first photo and when you showed the female up close, I thought, "What the hey? Did I mis-ID the male?" After reading the comments, I double-checked the first photo & saw 'em both.

I'm pretty sure your mystery duck is an American Black Duck, but Mallards and Black Ducks and domestic ducks can cross-breed so much that I'm not 100% certain. Where is Laura? She's the duck Queen. (I said "DUCK," not the other word!)

~Kathi, sending you a virtual helmet to protect your little noggin

I love wood ducks. We had them in Oakland when I was a a kid, but I haven't seen one in the year that I've been back in the Lake Merritt neighborhood, even on Thanksgiving weekend when the popualtion got crazy big.

The Bird Goddess is a Trickster Goddess I've begun to suspect. I don't have my glasses on, so I missed the Wood Ducks in the first photo (though, really, I was distracted by the white ducks - misdirection works on me every time), but ooooh, Wood Ducks, so pretty!

These pix are great! Lucky you to see that wood duck.

Can't wait to see what you got over the weekend.

I will never see a Snow Goose. And it's not for lack of trying. They don't like me...that's it.

Will you PLEASE try to not fall? For goodness sake.

My first thought on the hard-to-identify duck is that it was a Gadwall. But I think you may be on the right track. We don't have Black Ducks out this way, so I have never seen one.

Beth-WOW, I didn't even notice the white stripes on the male! I've updated accordingly. Thanks, and welcome to the bloggy!

KGMom--suction cups! Why didn't I think of that?

Mel--yes, but your office is in PERU. I think your birds are way more exciting too!

Katdoc--yeah, I just saw his silhouette and didn't notice there were two ducks, the drake and the hen! Updated! Thanks for the helmet, and there's actually been a discussion on the bird club's listserv about that Black Duck--claiming it's a Black Duck/Mallard hybrid. ?

Matty Boy--they're my favorite duck, so I hope I can still see them out there when I move.

Susan--I have to stay healthy for WV!

Snave--thanks! I would've been pumped if it had been a Gadwall--lifer!

Those are some lovely duck shots. Congratulations on the wood ducks.
That Moscovy is cool.

Hope this comment doesn't appear in triplicate. For some reason eblogger is giving me a hard time.