I got a lifer as my last bird of 2008. I was leaving Target over in State College (the big city) when I noticed a HUGE bird on the ground, pecking at something. This bird was the size of a terrier, with a beak thicker than my thumb. I took pictures with my lame phone camera: 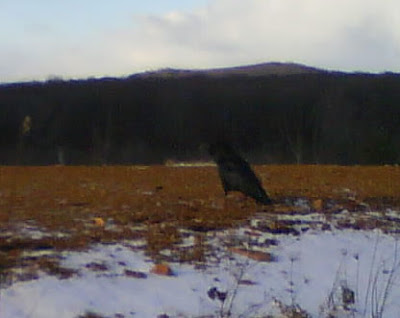 So this is a crummy picture taken on a dark cloudy day. Oh well. The cool thing was that there was just NO MISTAKING that this was a raven and not a crow. This guy was HUGE.

The first bird of 2009, fittingly enough, was a plain old American Crow. No photos, though.

We used to have a lot of crows around here, and then West Nile virus pretty much wiped them out for a few years. This past summer we saw a few again for the first time in years.

Congrats! My last bird was probably a Starling or House Sparrow - not sure. My first was a Cardinal crossing in front of my car as I pulled out of my complex to go birding.

Patrick--I woke up on New Year's Day to the sound of a crow cawing outside, so I made sure to look at him instead of the three billion starlings and house sparrows all around.

Earl--that would be a lifer for me!

John--see my comment to Patrick. It was only through careful work that I avoided seeing a HOSP or a starling as my first bird.

Delia: First Bird of '09 was a Great Horned Owl, because I left my house at 7am, before the birds were awake, to start my all-day birding marathon. Even though I went looking for house sparrows, I didn't see one until today, 1/5, as bird #51. Last Bird of '08 was probably the Red-bellied Woodpecker complaining that I was too slow filling the backyard feeders.

Nice raven, and how cool to have a Life Bird to end your year!

My first of 2009 was a goldfinch (and Lorelei and Isabelle saw a titmouse and chickadee and they wanted it DOCUMENTED, Dammit!)
My last bird of 2008? No idea. A prairie chicken?
: )

My last birds of 2008, male 'regular' Vermilion Flycatcher fighting with melanic of same bird... amazing clicking sounds while flying one into the other!

KatDoc--cool, you do a big day on New Year'? That's a neat idea. Cool birds, too!

Susan--have you seen a prairie chicken? I'd love to! Tell the girls that their FOYs are now officially documented!

Rabbits' Guy--I love them! They're so cute.

Mel--wow... I'm really hoping to see a vermillion flycatcher when I go to Texas in late February. So jealous of the wild birds you get to see down in Peru!

Congrats on your Raven! Hurrah!