In which I continue my series of posts potential lifers I might see in Virginia at the New River Bird and Nature Festival in April 2009. Much of the Flock will be staying the entire week of the festival; I will do only the second half of the week, arriving on Wednesday night in time for dinner, then birding Thursday through Sunday morning.

Thought I should combine these similarly named birds in one post, especially because the two often interbreed, resulting in the "'Brewster's and 'Lawrence's' warblers. Brewster's looks like a Blue-winged Warbler with a white chest, and Lawrence's looks like an all-yellow Golden-winged Warbler. Backcrosses of hybrids to pure parental types result in many intermediate-appearing birds." That's a lot of interbreeding; quotation courtesy of the Cornell site.

First off, let's look at the Blue-winged Warbler. 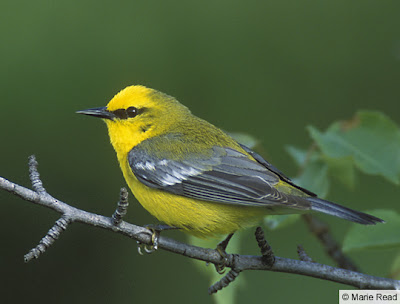 Now that's a brightly colored bird! Despite this fact, the Cornell site says it's "often overlooked," perhaps because it hangs out in "shrubland and old fields." Boy, that pretty much describes Central PA; why haven't I seen one? Guess I've "overlooked" it.

The female is similarly bright: 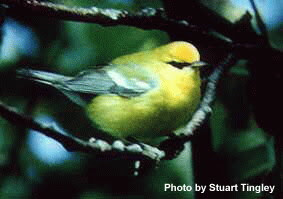 This is, like most warblers, a tiny (4-5 inches) bird, with a yellow head and underparts, a black eye line, and gray-blue wings. Note the two white wingbars (on both male and female) as well. Black legs and feet, beak, and eye.


I love warbler beaks, especially the super-sharp ones like the BWWA's here. They look like they could fly right through you, their stabbing little beaks leading the way. Ouch!

Their call is described as a "bee-buzz." It seems to me that a lot of warblers have these high buzzy songs, you know? I guess it's a good thing they look so distinctive, especially in the spring. Of course, you'll get a mean case of Warbler Neck looking for them, given their size and activity level. However, Dave Pollard from the festival says there's a nesting pair of BWWAs outside the cabin in which most of the Flock will be staying, so this one should be a sure thing!

These birds eat insects and spiders. I am imagining this little guy coming across one of those dewdrop-covered spiderwebs in the early morning; he sticks that fine little tweezers-like bill out and snip! no more spider. My birding pal Gretchen would like that, given her fear of spiders.

According to the range maps, I really shouldn't be surprised to see one of these puppies, even in Pennsylvania, as their breeding range includes points north, south, east, and west of PA and WV. The same holds true for our next bird, the Golden-winged Warbler. 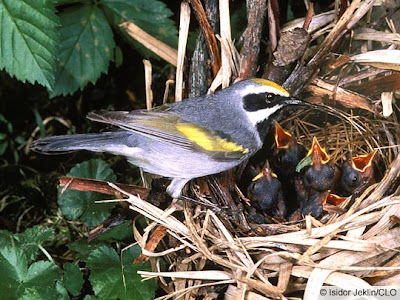 Pretty clear on the field marks here as well--a yellow/orange cap, a black (sometimes gray) mask surrounded by white outline, a gray body, yellow patches on the wings, and whitish underparts. The bill, eyes, and legs are black.

According to the Cornell site, the female looks similar to the male except that her mask is gray rather than black, and her wings will have either a smaller yellow patch or two bars rather than the patch. Interesting. It's not often that the female retains similar colors to the male, but hey--more power to her. Still, the USGS bird site shows her looking a little more gray-green than the gray-blue male: 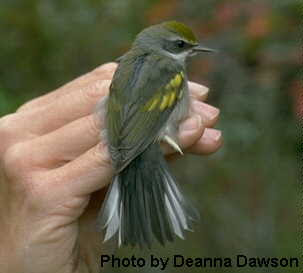 Kinda greeny, don't you think? A result of the yellow on gray. Note those nice white feathers on the tail edges too.

My birdJam shows that the GWWA's song is a "zee-bee-bee-bee." I have a feeling there's going to be a virtual din of zees and bees and buzzes all around us in the woods of West Va. We'll just have to keep our eyes sharp.

Speaking of eyes, I'm getting a little concerned about my vision. It seems like I can't see up close anymore without readers (and I might need more powerful ones soon), and I can't really see far away that well either. I know my eye doctor has told me that this is the result of my right eye's having a "slight" case of astigmatism, but not enough to correct for. The last few times I've gone, my contacts prescription has stayed the same, but I haven't gotten a new pair of glasses in probably six years. Maybe I should do that, just in case. It seems like I'm always having to blink and kind-of adjust my eyes a lot when distance-viewing (close-up viewing too), and they're sometimes kinda teary-feeling or even gummy-feeling (eeeww). I'd hate to miss out on a great bird or a great view because I just plain can't see it well enough. Hmmph. 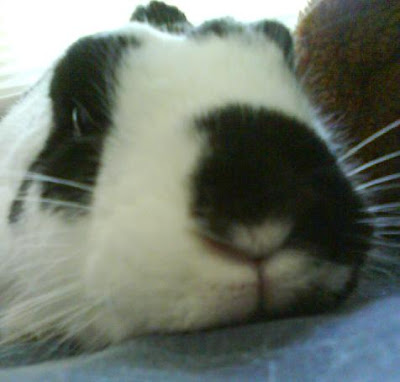 Another medical note: Niblet has developed some sort of lump (absess?) where his right ear used to be. The vet had always said it was healed over, but it seems like something is seeping out of there, and on Tuesday night, I noticed he had developed a sort of bollus under the skin there. I'm taking him to the doctor today, where I'm hoping they'll just say it's an absess, drain it, and give him a little shot of antibiotics. I just hope it's nothing serious. I'll keep you posted.
Posted by dguzman at 12:18 PM

Poor Niblet! I hope the vet fixes him up STAT.

Loving these profiles Delia- Thanks for doing all the work.
"Bee-buzz-bee-zee-zee-bee....."
They should all have distinctive songs like-
"ramalama-ding-dong"
or
"boop-boop-e-doop"

Gosh when I read about all of you going to that birdie festival...it makes me want to go.. i would love to see both of those warblers...

I love those little warblers and will be taking a warbler ID class tomorrow at the Space coast bird festival that we are at now.

Sorry about your little niblet..hope it is just an easy fix.

Those warblers are beautiful!

I hope Niblet is doing okay.

Awww--Niblet. Hope you get better real soon.
And get new eye thingies, Delia.

I hope Niblet is OK!

Lynne made me laugh... I'll bet that every bird I see in WV will be a life bird for me. I'll definitely need to carry a small notebook to record what I see.

Get your peepers checked!

I am desperate to get a Cerulean warbler on our New River trip. That has been my "nemesis" bird for the past year. I remember seeing my first blue-winged warbler. It was at the top of a tree singing it's heart out and I sat on a bench for over 1/2 hour watching and listening to it.

The warblers are so beautiful, thank you for all the information!

Their song really is distinctive... not high at all and sounds exactly like it's written.

Listen to it on your fake birdJam and you'll see what I mean Delia!

Hope Niblet is okay... abcesses can be nasty buggers. Give him a nose bonk from me, ok?

I hope Niblet is okay and it ends up being something simple that will go away.

Best wishes to him.

Lynne--exactly! I mean, would it be so hard for a bird to sing "My country 'tis of thee" (the Ani DiFranco version, of course) or "Fame?" Niblet's good--report forthcoming.

Mary--DEFINITELY carry some paper and a pencil--you'll need them to remember everything you see. Or perhaps they'll give us a checklist in our packets or something. Either way--it helps to write stuff down, because the birds will probably be coming fast and furious.

Beth--neato. Ceruleans are nice--I've seen two so far, but never got to observe for that long--that's cool.

The first warbler I learned to ID by its call, the BWWA has a special place in my heart.

When I was first learning warblers, I went on some "warbler walks" at the Cincinnati Nature Center. The trip leader pointed out birds, and I dutifully checked them off, including Golden-winged Warbler. It wasn't until years later that someone told me what a rare find it was!

New River used to have "guaranteed" trips, named after the target bird. Though most of the trip names have been changed to the birding SITE, not an acutal BIRD, they still have one target bird trip. (Swainson's Warbler) I took the Golden-winged Warbler trip, led by our own BOTB, and we didn't get any GWWA. The next day's group got tons, as there was a "fall-out" overnight. I still harass him about that!

You should have a Trip List for New River in your packet (mine was tucked inside the Festival brochure) but if you didn't get one there will be plenty on site. I usually carry a notepad in the field for listing. This keeps my trip list pristine, since I am such an obsessive person that I save them, LOL!

I recently came across your blog and have been reading along. I think I will leave my first comment. I don’t know what to say except that I have enjoyed reading. Nice blog. I will keep visiting this blog very often.